Long-term plan: Vigo County School Corporation Superintendent Ron Haworth talks about the benefits of a long-term facilities plan during his presentation on Jan. 13, 2022, at the corporation's headquarters. 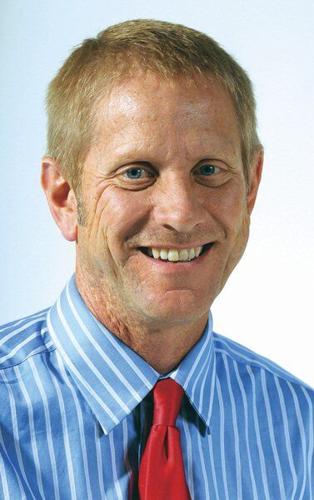 Long-term plan: Vigo County School Corporation Superintendent Ron Haworth talks about the benefits of a long-term facilities plan during his presentation on Jan. 13, 2022, at the corporation's headquarters.

The community has more to talk about.

The future of Vigo County’s schools and their capacity to give local kids a 21st-century education remains an open question as 2023 and a moment of transition approaches.

Vigo County School Corp. Superintendent Rob Haworth announced at Monday’s School Board meeting that he’s retiring from his 35-year career in public education effective Jan. 2. He called the past four-plus years in his role a “great honor and privilege.” Haworth cited family concerns and personal reflections that, “Hey, you are 57, what do you want to do with the next stage of your life?”

A few days later, Haworth confirmed to Tribune-Star reporter Sue Loughlin that he’ll become the new president and CEO of the United Way of Allen County in Fort Wayne, starting Jan. 3. That new role offers the chance “to not just impact education but other things that impair people’s ability to have educational access.”

His announcement also came less than a week after the election of four new School Board members. Those races drew a field of 14 candidates, many of whom opposed a referendum last May to renovate and rebuild the county’s three high schools and West Vigo Middle School — a $261-million project funded over 22 years through a property-tax increase. Voters turned down that plan.

Still, the needs behind it remain. Those needs, coupled with others, became the focus of dozens and dozens of community forums tirelessly hosted by Haworth and the VCSC staff since he took over as superintendent amid a difficult time in 2018 and then led the district through the unprecedented adversities of the COVID-19 pandemic.

Such community forums are wise and valuable, and provide opportunities for average folks to ask questions and learn about issues firsthand — a more meaningful exchange of information than social media banter.

The VCSC — and other local public entities — should continue to offer similar community forums for significant issues.

Haworth’s permanent successor and the new School Board will have to devise a new plan for the high schools and other Vigo County facilities, and that plan should be shaped by dozens of community forums.

Those sessions can help outline ideas to deal with chronic drainage problems and leaks from the flat roofs at North and South, the cost-effectiveness of heavy repairs to plumbing, sewer, heating and cooling and electrical systems at all three high schools, and finding replacement parts for those systems — some of which are no longer made.

West Vigo opened 62 years ago. North and South were built in lowest-cost fashion in the late 1960s and early 1970s, and opened in 1971. The school boards of that era might be surprised those schools still function, with a few structural additions, largely as they did more than a half-century ago.

The community’s investment in its schools could certainly be a topic discussed at future community forums.

Vigo County’s overall property tax rate ranks eighth-highest among Indiana’s 92 counties in 2022, according to Purdue University agricultural economist and property-tax expert Larry DeBoer. His calculations are based on data from the Indiana Department of Local Government Finance.

But the portion that property-taxpayers pay toward the Vigo County School Corporation’s unit rate ranks 169th-highest out of 290 public school districts in Indiana, well below the median and relatively low in general. Given that, Vigo County ranked 72nd-best out of the 92 Indiana counties for school-funding adequacy, according to the annual County Health Rankings by the University of Wisconsin Population Health Institute.

“Rates are high because the county rate ranks eighth-highest among the 92, and Terre Haute ranks 35th out of 564 cities and towns. The library rate is above median, and some of the special district rates are in the 90th percentile among special districts,” DeBoer said via email last April.

The community’s priorities for its property taxes should be discussed at VCSC community forums in 2023 and beyond, as well as whether the county will continue with its current three high schools or consolidate into two or one in the future.

The strength and modern capabilities of its schools will affect Terre Haute’s chances of reversing its population decline — which is projected to continue through 2050, unlike most other Indiana metros — and also affect the education of the latest generation of kids.

Vigo County and Terre Haute residents have a lot to talk about, and some big decisions ahead.