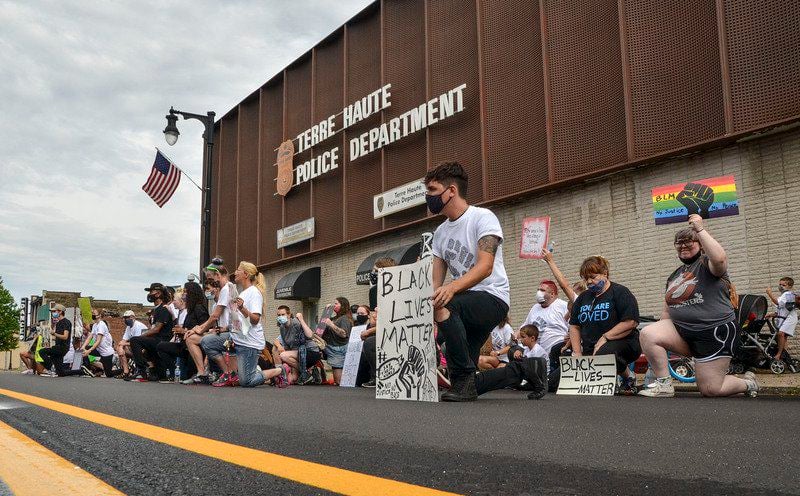 Silent: Protesters take a knee along Wabash Avenue in front of the Terre Haute Police Department’s headquarters during Saturday’s March for Change. 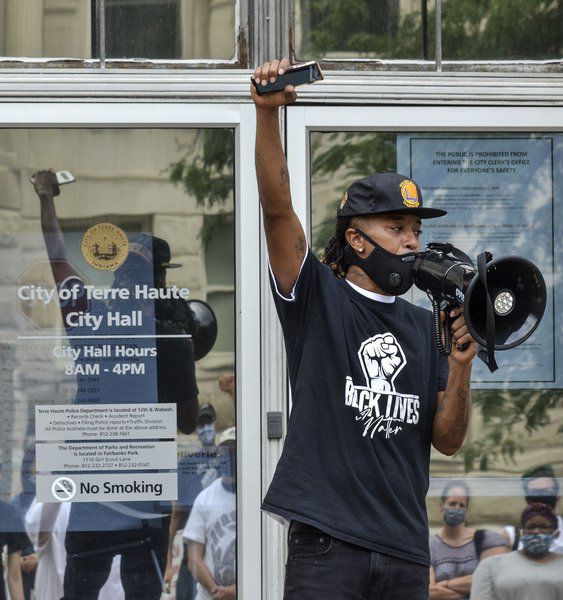 Matter!: Erick Beverly leads a chant at the end of his remarks on the steps of Terre Haute City Hall prior to the March for Change on Saturday. 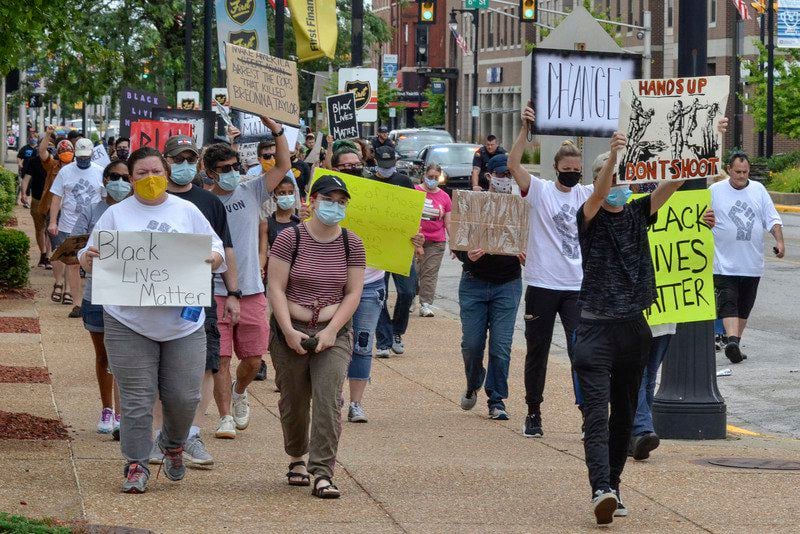 Letting their voice be heard: Protesters make their way down Wabash Avenue during Saturday’s March for Change. 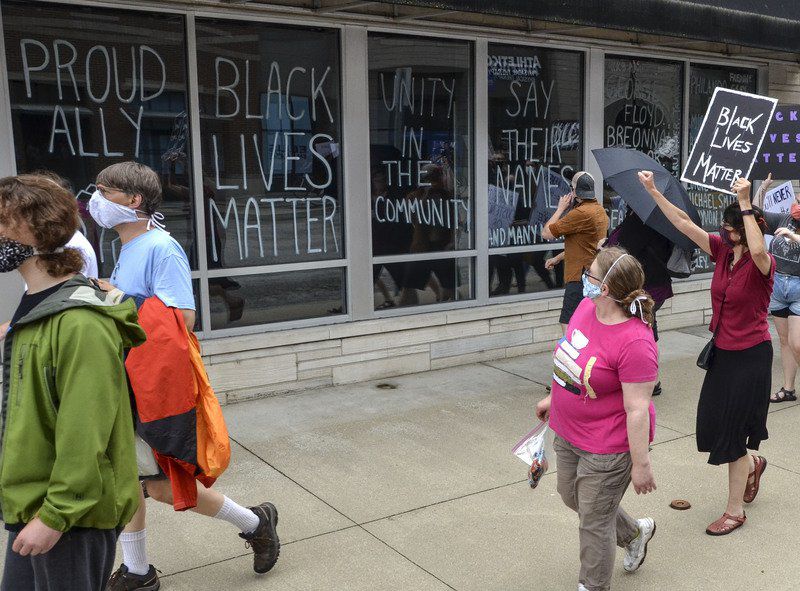 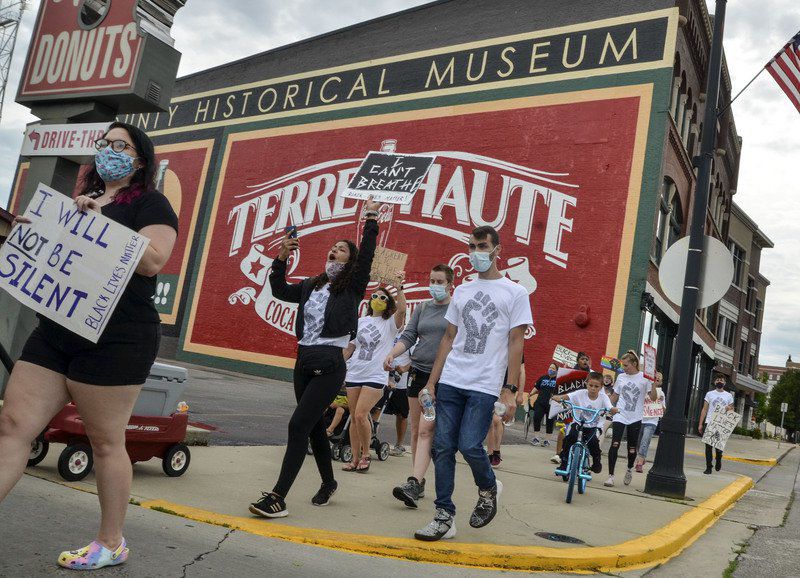 “I Can’t Breathe”: Protesters participating in Saturday’s March for Change make their way past the Vigo County Historical Museum on Saturday evening. 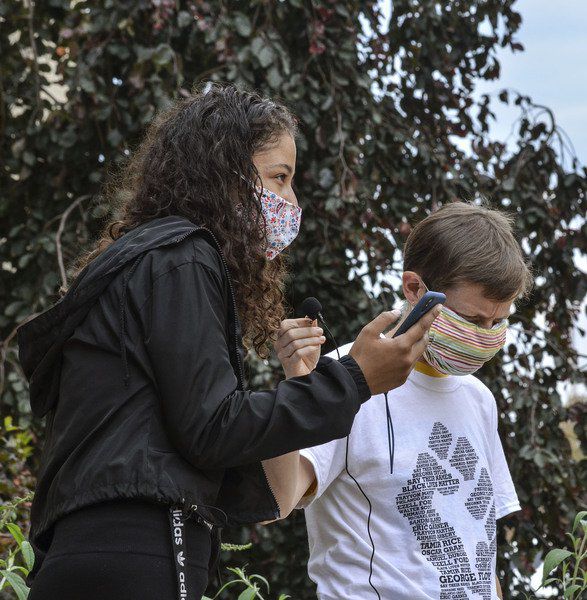 A call to action: Dominique Morefield (left) and Emma Crossen (right) praise the Vigo County School Corporation’s decision to fire Lt. Mike Anderson from his role as a school protection officer after his inflammatory Facebook posts prior to Saturday’s March for Change. 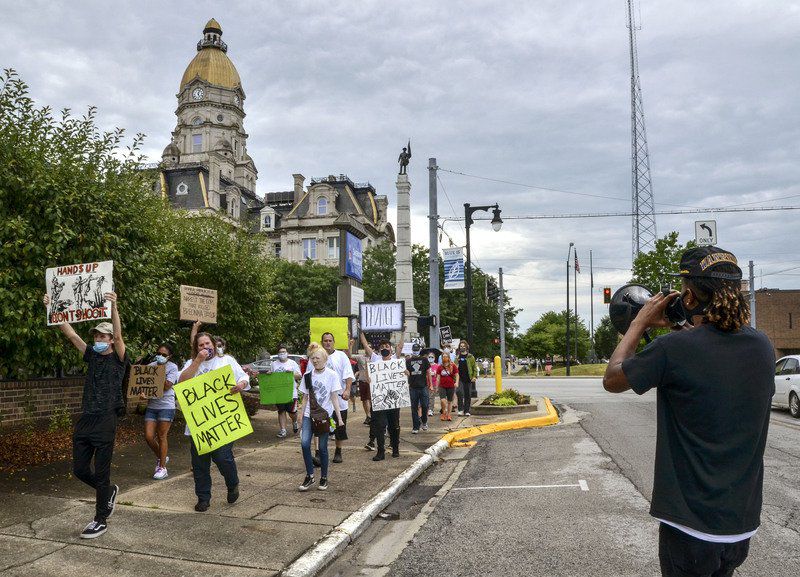 A call for justice: Erick Beverly (right) leads a chant as protesters make their way down Wabash Avenue during Saturday’s March for Change.

Silent: Protesters take a knee along Wabash Avenue in front of the Terre Haute Police Department’s headquarters during Saturday’s March for Change.

Letting their voice be heard: Protesters make their way down Wabash Avenue during Saturday’s March for Change.

“I Can’t Breathe”: Protesters participating in Saturday’s March for Change make their way past the Vigo County Historical Museum on Saturday evening.

A call for justice: Erick Beverly (right) leads a chant as protesters make their way down Wabash Avenue during Saturday’s March for Change.

Some 60 people rallied and marched through downtown Terre Haute on Saturday, refusing to let slip the momentum created over the past month concerning racial justice and police reform.

Rallygoers gathered after 4 p.m. between the Vigo County Courthouse and Terre Haute City Hall to hear from organizers about local efforts to impart lasting change.

The Reform Movement of Terre Haute organizers Dominique Morefield and Emma Crossen said racism is alive and well in Vigo County, and pointed to the firing of a Vigo County School Corporation resource officer this week as proof.

Among other things, the corporation's termination letter to Anderson cited the current turmoil in the county, state and nation and Anderson's frequently avowed support for the Confederate battle flag, including one Facebook post in which he posted a photo of Civil War re-enactors containing overlay text of "It's not just about history ... the South was right!"

Anderson's own header on that post said, "total agree."

"We ought to thank the Vigo County School Corp. for [firing Anderson]," Crossen said to a chorus of applause. "They made the right decision."

Morefield had no such praise for Vigo Sheriff John Plasse. Morefield said it seems the sheriff has a much higher tolerance for racism and mocked the lack of formal discipline for Anderson.

Plasse told the Tribune-Star on Friday that while posts like Anderson's erode the public's trust in law enforcement, he is being careful not to infringe on First Amendment rights and make knee-jerk reactions.

"Sheriff Plasse, we call on you today to fire [Lt.] Mike Anderson," Crossen said to another round of applause.

" ... But please, Vigo County School Corporation, don't hire another resource officer in his place," Morefield continued. "The school resources our children need are counselors and therapists and nurses, not more armed men walking around who are trained to kill.

Erick Beverly, organizer of Change of Terre Haute, highlighted the plight of African Americans and the poor and how their dealings with police too often end in death.

"Our nation is in a dark spot, and you might be part of the problem if you say it's not," Beverly said. "Innocent men, women and children, after hundreds of years, are still losing their lives due to police brutality, simply because their skin is dark."

Before leading the brief march down Wabash Avenue, Beverly called on people of all races and all backgrounds to put aside perceived differences and fight together to end hate.

"These organizations, either Change or Reform, can't do what they're supposed to do, until you all do what you're supposed to do," Beverly said. "It takes all of us as one working together, no matter the color of your skin or race.

"We're all in this together, at the end of the day, fighting hate. It's going to take unity and love to cure it."