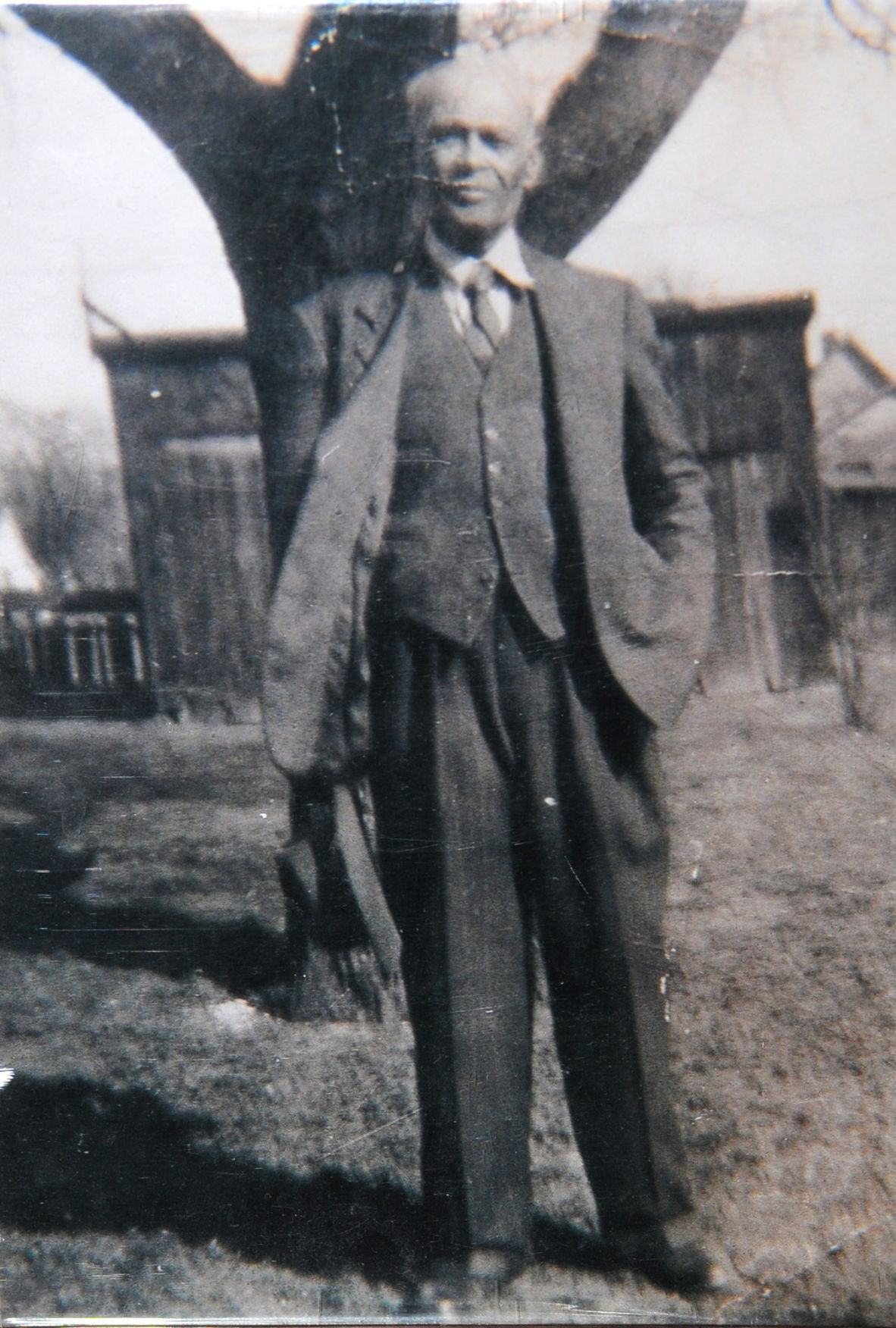 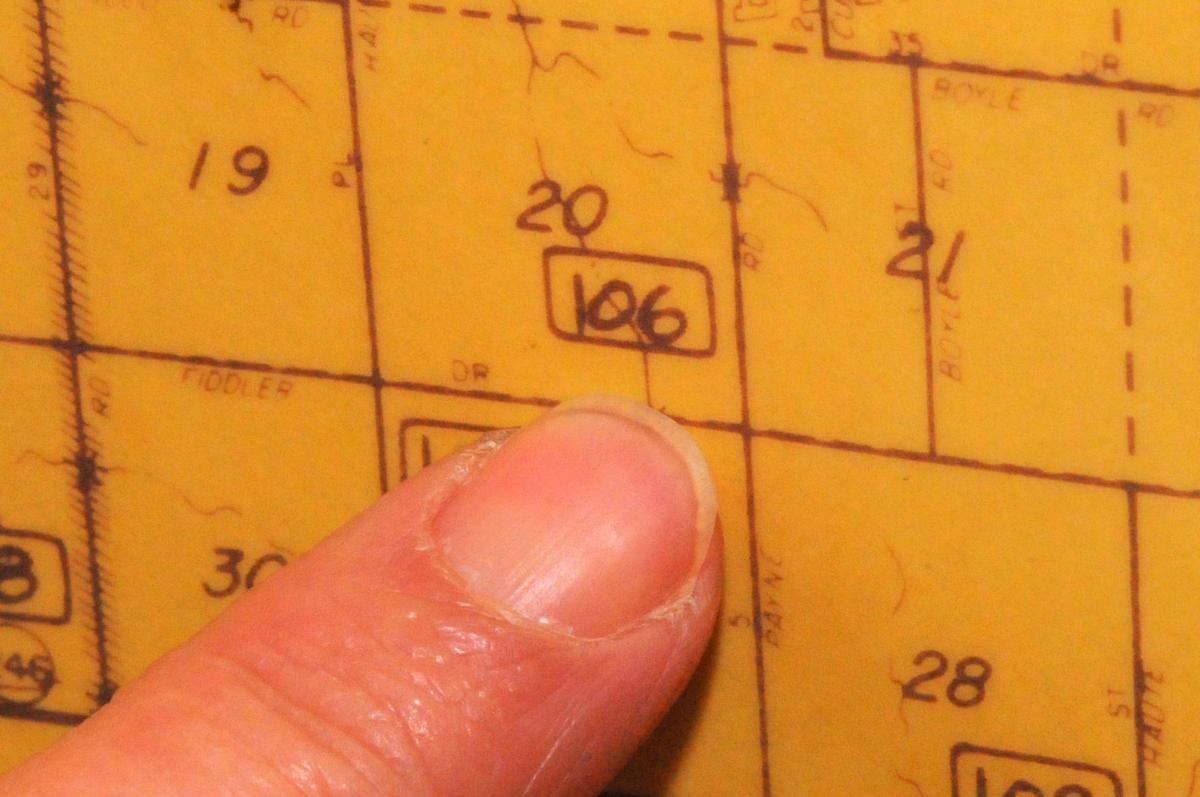 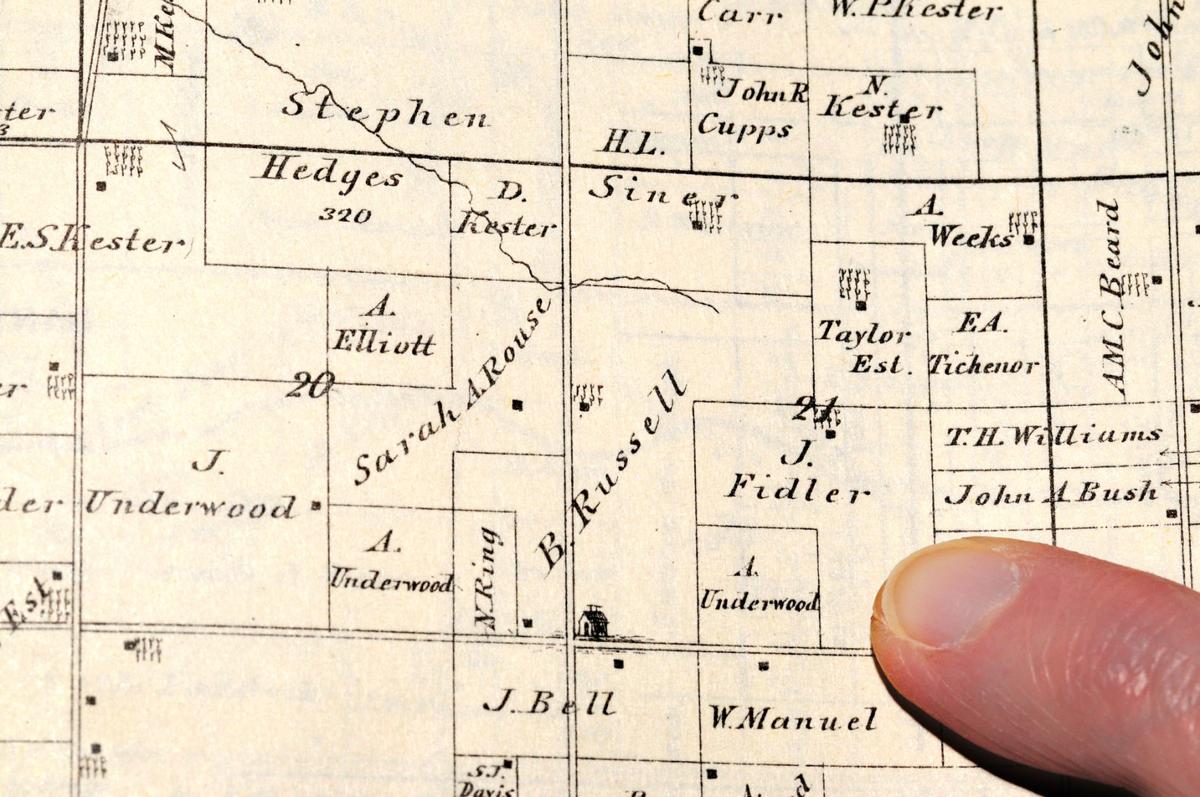 Tribune-Star/Jim Avelis Around here: This map from the mid 1800s shows several familiar names along what is now French Drive. The Underwood Cemetery is located in Section 20, to the left on the map. 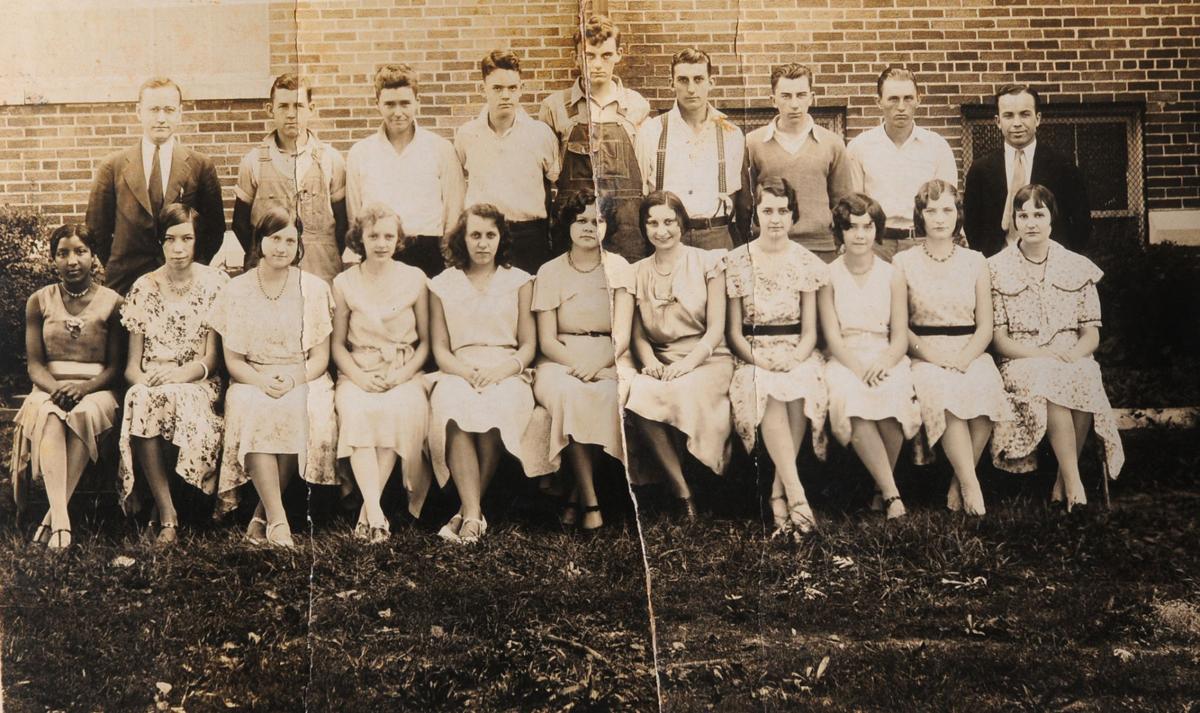 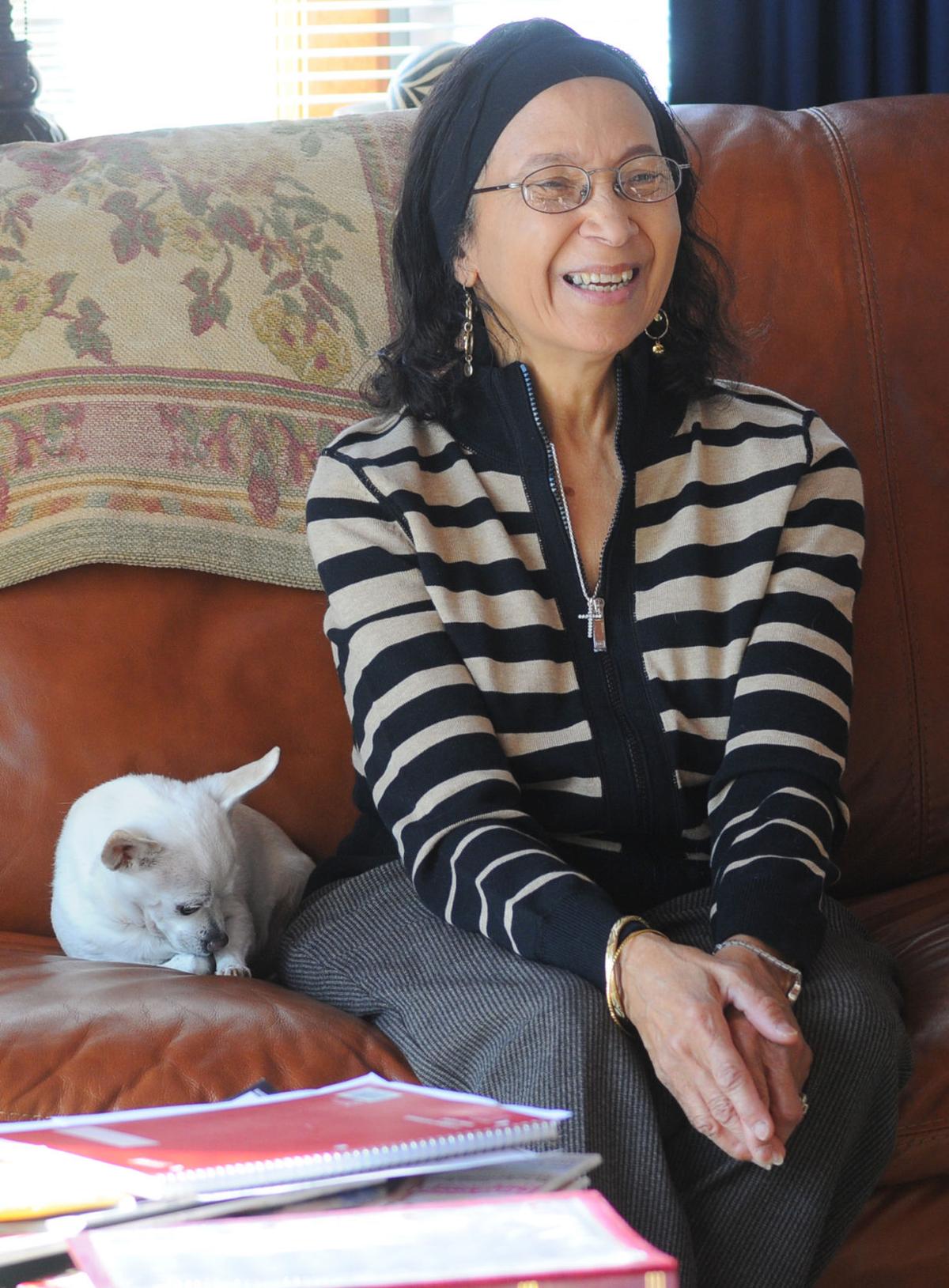 Tribune-Star/Jim Avelis Researching: Wynonna Batton is continuing her research into her family history, a good deal of which centers around the Underwood settlement in Linton township. 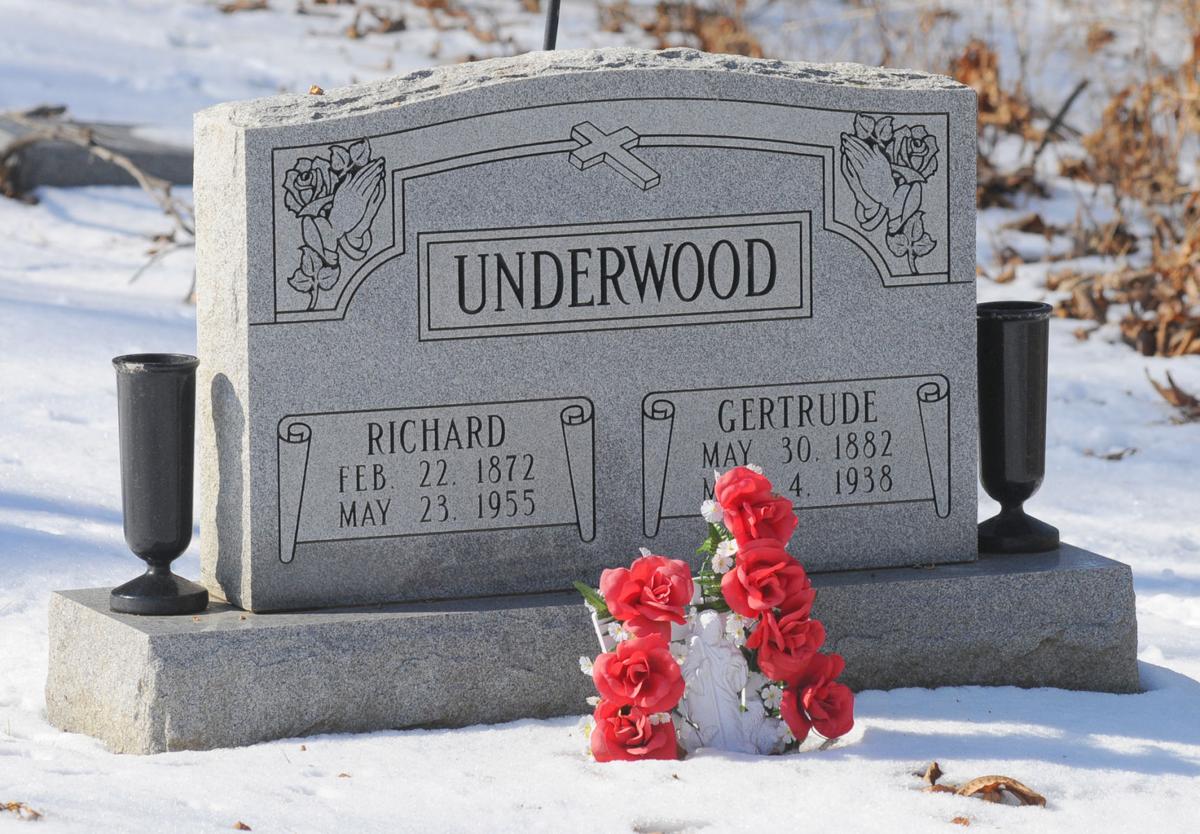 Tribune-Star/Jim Avelis Namesake: The Underwood Cemetery in Linton township holds the markers of several members of that family as well as markers with Rouse, Russell and Bell engraved on them. 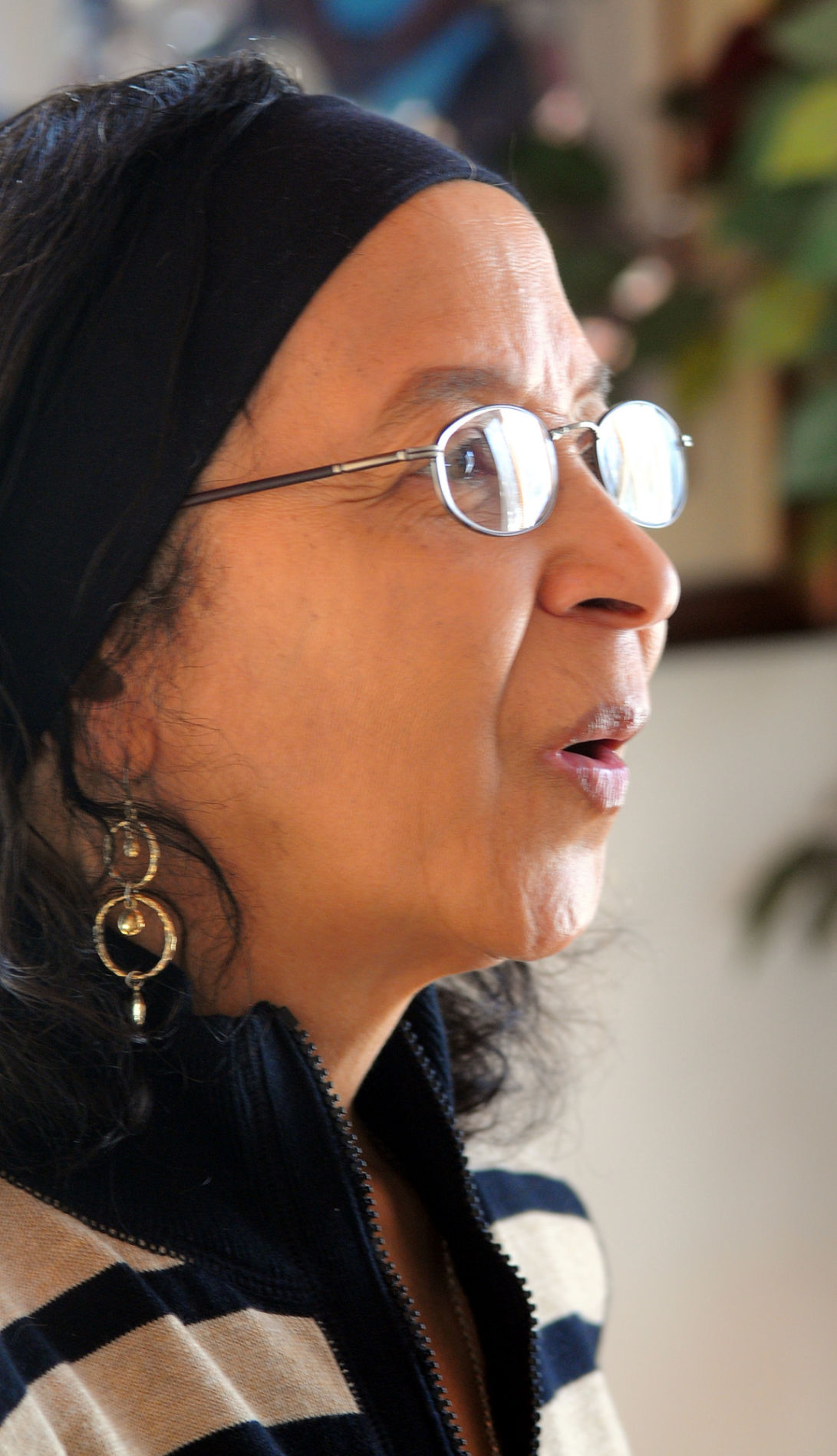 Tribune-Star/Jim Avelis Around here: This map from the mid 1800s shows several familiar names along what is now French Drive. The Underwood Cemetery is located in Section 20, to the left on the map.

Tribune-Star/Jim Avelis Researching: Wynonna Batton is continuing her research into her family history, a good deal of which centers around the Underwood settlement in Linton township.

Tribune-Star/Jim Avelis Namesake: The Underwood Cemetery in Linton township holds the markers of several members of that family as well as markers with Rouse, Russell and Bell engraved on them.

John Underwood, a “free Negro” living on a farm he owned in pre-Civil War Vigo County, took part in the dangerous work of helping fugitive slaves flee the United States to Canada as part of the “Underground Railroad.”

On one occasion, slave catchers discovered what Underwood was doing and “were threatening to do [him] bodily harm,” according to John W. Lyda’s book, “The Negro in the History of Indiana.” But Underwood, a member of the local Masonic lodge “saved himself by giving the Masonic Recognition sign. As those who were threatening him were themselves members of that lodge, they desisted from injuring him,” Lyda wrote.

This story is one of few that remain from what was once a thriving black settlement in Linton Township in southern Vigo County. Settled by John Underwood in about 1841, it was one of dozens of free, black settlements in Indiana that existed many years before the Emancipation Proclamation was signed by President Abraham Lincoln in 1863. It became known as the Underwood Settlement.

According to Lyda, black families living in the Underwood Settlement in the mid-1800s included the Russells, the Manuels, the Underwoods and others.

Another family living in the area in the 1800s was the Bell family. One of the family’s descendants, Greg Bell, lived with his many brothers and sisters in the settlement until 1942, when he was 12. Bell would go on to win a gold medal in the 1956 Olympics. Bell’s father, Curtis E. Bell, is among the 50 or 60 people buried in the Underwood Cemetery, a small, secluded graveyard not far from Vigo County’s Prairie Creek Park.

“I did not hear anything negative from my family about living in Pimento,” said Wynona Batton, a retired Vigo County school principal and the great-great-granddaughter of John Underwood, the settlement’s founder. The family of her late mother, Ruth Underwood Owens, lived in Pimento for several generations. Indeed, Batton’s father, Bradley Owens Sr., still sometimes tells stories of hunting in Pimento while courting his bride-to-be, Batton said. “They enjoyed being in Pimento,” she said.

Greg Bell, 80, now a dentist in Logansport and a motivational speaker, is one of the few people today who can remember actually living in the Underwood Settlement. His family may have been the last black family to live in the Underwood community. By all accounts, only Mack Underwood, who lived in Pimento until his death in 1958, remained in the area longer.

In 1874, according to an Indiana atlas published at that time, the Bell family farm, which was between 40 and 65 acres, was near what is now French Drive and Sullivan Place. Nearby were farms owned by the Russells, Manuels and Underwoods. Also near the Bell property was the Underwood Cemetery.

“It was on Underwood property,” Bell said of the cemetery. He also remembers well brothers Mack and Woodie Underwood, who were born in the last two decades of the 1800s and lived into the 1950s.

“They had great apple trees” on the Underwood property, Bell recalled. He also remembers Woodie Underwood chewed tobacco and would spit tobacco juice behind a wood stove in his home. There was no can or spittoon back there, either, Bell recalled with a laugh.

Bell also remembers attending the integrated Pimento elementary school when he was a youth. Outside of him and his siblings, the only other black student at the school at that time was Meredith Underwood. “He was one of the fastest runners I ever knew,” Bell said, adding it was his goal to someday run as fast as Meredith, who would later become a boxer. Bell, who won the Olympic gold medal for the long jump in 1956, said he eventually was able to outrun his schoolmate. Meredith Underwood, who was born in 1921 and served in World War II, is also buried in the Underwood Cemetery.

Anyone driving to Linton Township to see traces of the old settlement will be disappointed. There are no known buildings from those days remaining at the site. However, the Old Linton Missionary Baptist Church, which once served as the settlement’s house of worship, still stands miles to the north in Terre Haute’s Highland neighborhood, where many residents of the Underwood Settlement moved about 1900.

In 1905, as stated in the official church history: “The old church in Linton was taken apart in sections and hauled to this site and set up.” The church, which still stands today at 2851 N. 13 1/2 St., is now called the Highland Missionary Baptist Church.

The family of Wynona Batton’s mother was among the Underwood Settlement families to move to Highland. Despite the long distance, Batton recalls fondly her mother and her aunt, Pearl Underwood Allen, taking their children south to Pimento to tend to the small Underwood graveyard.

“It was primarily maintained by families,” Batton said. “I watched what my mother, my aunt and my father did there, and it became very important to me.” Many years later, she and her late husband, Carl Jr., and others worked hard to restore the old cemetery, which had become overgrown. They raised money from people connected to the settlement — some living many states away. The effort provided enough money to purchase benches, plants and other improvements, Batton said.

The Underwood Settlement was one of more than 60 black settlements in Indiana at the start of the Civil War, according to a 2002 article in The Indianapolis Star. These communities were formed by former slaves who “sought to declare their independence by forming their own communities … living out their dreams of buying land and finding refuge from economic, social and political bias.”

In many cases, Quaker families helped former slaves establish settlements in Indiana. However, according to the book, “The Negro in Indiana before 1900” by Emma Lou Thornbrough (1957), Quakers did “not appear to have played as important a part in encouraging Negro immigration [into Vigo County] as did Friends in other parts of the state.”

Settling land that was then mostly virgin forest was no easy task. The property where black settlers formed their communities was “entirely unimproved,” Thornbrough wrote. “The Negro settlers cleared it, drained it, built houses and barns, and became generally successful.”

This was true of the Underwood Settlement, as well.

“What John Underwood did, he did with his own hard work,” Batton said.

According to a history of Vigo and Parke counties, written by H.W. Beckwith (1880), John Underwood was born in North Carolina in 1803. He was a farmer his whole life, beginning work as a “plow boy” at age 12. Underwood moved to Linton Township in 1841. After the Civil War, he returned to North Carolina and brought his mother, Mary Russell, back to Indiana with him. Mary Russell, born about 1788, is likely the oldest person buried in the Underwood Cemetery. She died in 1872.

According to Beckwith’s history, in 1880 John Underwood was 77 and owned 100 acres in Linton Township. In addition, he also had given “a good deal of real estate away to his children.”

“That makes me very proud,” Batton said of her ancestor’s hard work and accomplishment. “It didn’t come easy. I respect what he did.”

As with other black settlements, the Underwood Settlement slowly emptied of its inhabitants over the decades after the Civil War. Crop failures, the lure of a better life in the city and a lack of interest in farming among younger generations contributed to the out-migration, Thornbrough wrote. “By 1900, most of the agricultural settlements had almost disappeared.”

But not all black families left Pimento by 1900 or even by World War II. Unfortunately, the tale of the Underwood Settlement’s final years includes an unsettling story.

The Bell family’s departure from the Underwood Settlement in 1942 was not voluntary. The U.S. government wanted the Bell’s farm as part of a plan to build an ammunition depot. The family was given 30 days to leave the land it had farmed for generations. The government paid the Bells $1,500, Greg Bell said, adding he recalls armed men on horseback coming to the family farm each day to ensure they were making preparations to leave.

“It was really a traumatic time for us,” Bell said. “My father was 65 with a fifth-grade education. So where do you go with that?”

“I think it was a very well respected and an integral part of the community,” said Bionca Gambill, a 20-year trustee of Linton Township. Gambill, as trustee, was charged with caring for the Underwood Cemetery. She had a white fence placed around the small graveyard. “There’s so much history there,” Gambill said.

It is Wynona Batton’s hope that future generations will continue to care for the Underwood Cemetery and keep the memory of the former settlement alive. “I’d like to inspire the younger people,” she said.

James Joseph Priester: Interment of cremains 10:00 a.m. Saturday, October 16, 2021, at Calvary Cemetery. All are welcome. A gathering will follow at the family home to honor Jim, a man who touched the lives of many.

BLOOMINGTON, Ill. [mdash] Virginia Rehmel Liston, age 98 of Bloomington, IL, formerly of Terre Haute, IN passed away at 8:35 PM on Sunday, March 28, 2021 at Heritage Health, Bloomington IL. A private family memorial service was held April 1, 2021. A private inurnment will be held at Westland…