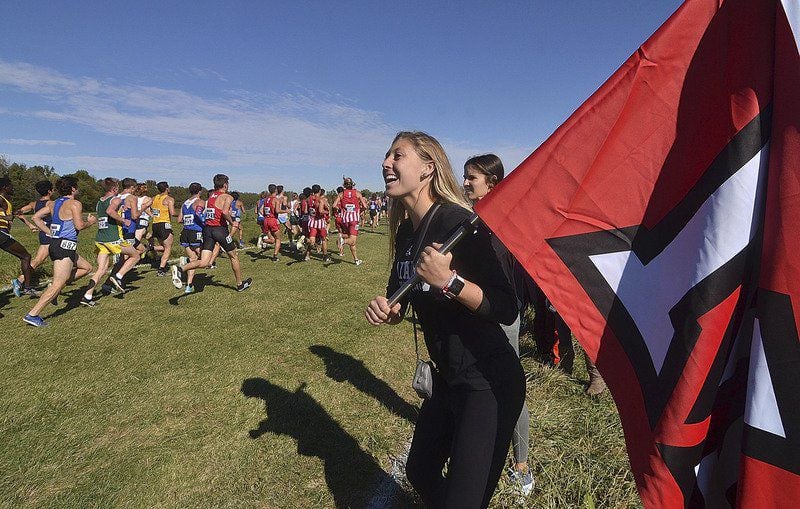 Tribune-Star/Joseph C. GarzaRedhawk fan in Terre Haute: Miami of Ohio student Ally Gallagher cheers on her Redhawk runners during the men’s Blue Race of the Pre-National Invitational on Saturday at the Lavern Gibson Course. 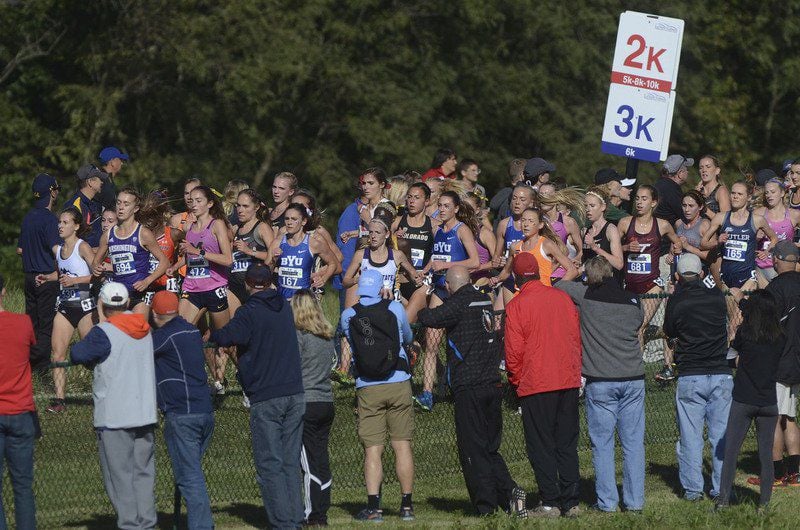 Tribune-Star/Joseph C. GarzaSpectator-friendly: Spectators from throughout the country line the fence along the Lavern Gibson Championship Course on Saturday during the women’s Blue Race of the Pre-Nationals Invitational.

Tribune-Star/Joseph C. GarzaRedhawk fan in Terre Haute: Miami of Ohio student Ally Gallagher cheers on her Redhawk runners during the men’s Blue Race of the Pre-National Invitational on Saturday at the Lavern Gibson Course.

Tribune-Star/Joseph C. GarzaSpectator-friendly: Spectators from throughout the country line the fence along the Lavern Gibson Championship Course on Saturday during the women’s Blue Race of the Pre-Nationals Invitational.

Terre Haute was again on the national stage Saturday with some of the most talented cross country runners in collegiate athletics plying their trade at Lavern Gibson Championship Cross Country Course.

Serving as the second act in what’s considered the biggest weekend of the NCAA Division I Cross Country regular season, Cross Country Town USA played host to the Under Armour Pre-National Invitational.

And while no where was the level of competition higher, other than at Friday’s Nuttycombe Wisconsin Invitational in Madison, Wisconsin, what sets racing in Terre Haute apart from anywhere else, spectators say, is the ease with which fans can watch the runners through the majority of the course.

The scenic fall foliage serving as backdrop to the well-manicured course doesn’t hurt either, they said.

Making the drive from Crown Point, Indiana, Larry and Marilyn Saylor are no strangers to Lavern Gibson, having watched their grandson race there four years in high school and now two at IUPUI.

More avid fans of their grandson than the sport itself, the couple said it’s still striking to see how pleasant and easy it is to take in a race at Terre Haute versus the many other places they’ve been.

“We’ve always been partial to this course,” Marilyn Saylor said.

“And I think it’s as fine as it gets,” Larry Saylor added. “Last week we were at Notre Dame where they ran and it was nice, but nothing like this place. There is just nothing like it.”

The course was intentionally designed by John McNichols to provide such sight lines and make the sport more spectator friendly, according to the course’s website.

Tim McGinnis, of Fort Wayne, Indiana, said that while it takes some maneuvering in the infield to see some parts of the race, it’s obvious much attention was paid to the experience of the fan.

“It’s a great venue for spectators,” said McGinnis, who attended Saturday’s invitational to watch his granddaughter race for Eastern Michigan University. “You have to have around a little bit at times, but overall it’s much better than some of the other places I’ve been.

“A lot of places they go they either run a couple laps and you lose them half the race or for most of it in some places. This course here is much better to actually see them run.”

Lavern Gibson, the crown jewel of the Wabash Valley family Sports Center, will host the NCAA Division 1 Cross County National Championships on Nov. 23, the 13th such time in the course’s 22-year history.