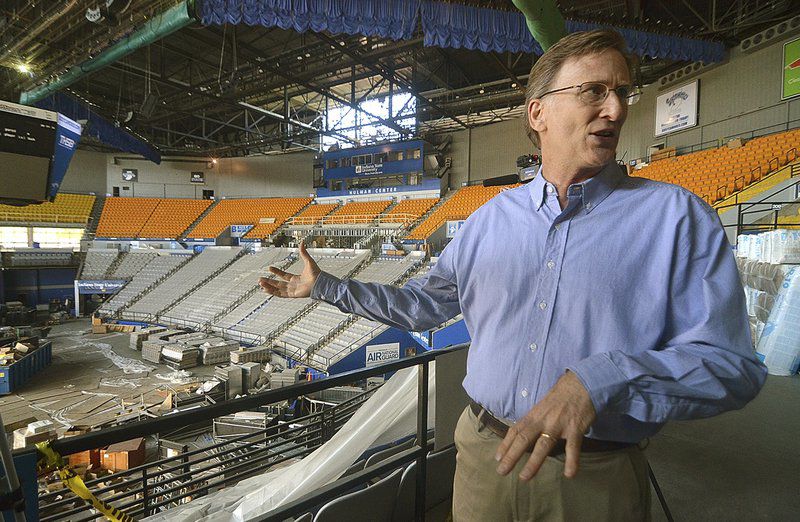 Tribune-Star/Joseph C. Garza A modern look coming soon: Bryan Duncan, director of capital planning and improvements at Indiana State University, describes the upgrades and enhancements being made for Hulman Center during a tour of the facility on Wednesday. 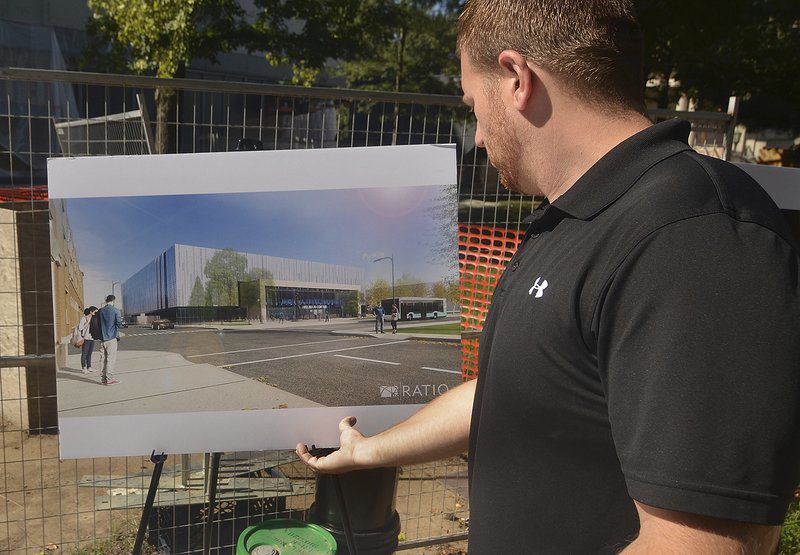 Tribune-Star/Joseph C. Garza A scene from the future: Seth Porter, Hulman Center project manager with Indiana State University, sets up artist renderings for the media after a tour of the facility on Wednesday. 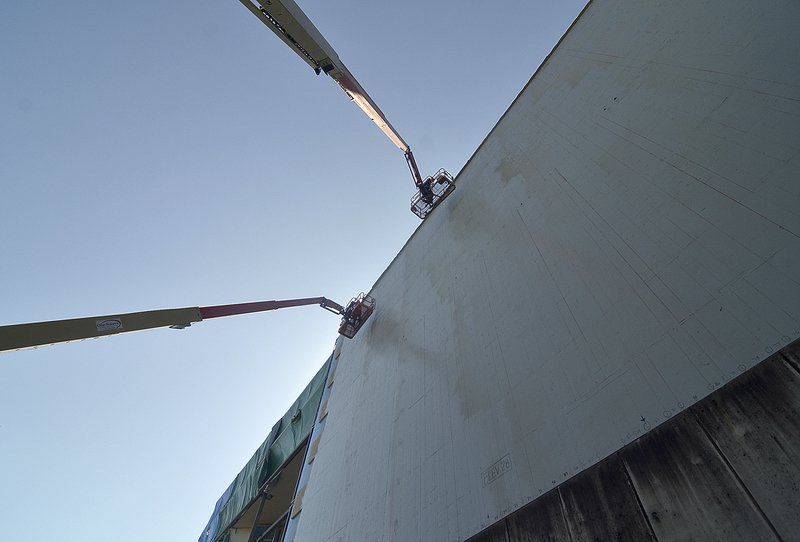 Tribune-Star/Joseph C. GarzaDawn of a new day at Hulman Center: Construction workers lay out siding for installation on the north side of Hulman Center on Wednesday. 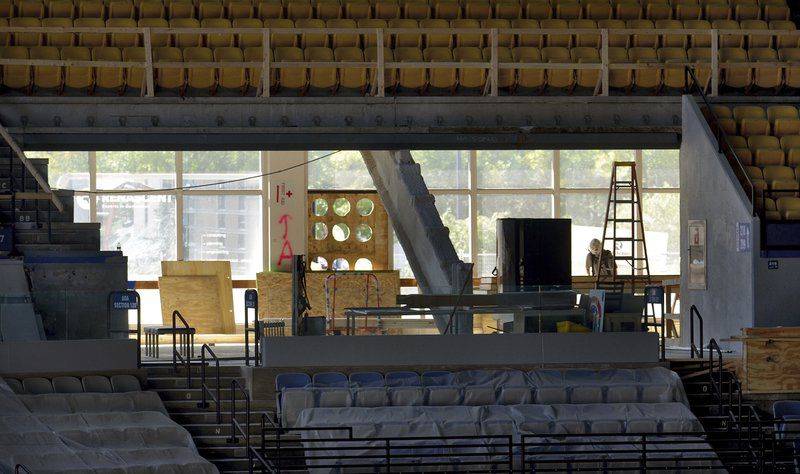 Tribune-Star/Joseph C. GarzaMore beams through the beams: Renovations to Hulman Center include open areas that used to have seats where outside light can now come into the building, seen here on Wednesday.

Tribune-Star/Joseph C. GarzaOffice in the air: Jay Hudson of Strode Construction looks over plans for Hulman Center as he works above the ground on Wednesday on the east side of the facility.

Tribune-Star/Joseph C. Garza A modern look coming soon: Bryan Duncan, director of capital planning and improvements at Indiana State University, describes the upgrades and enhancements being made for Hulman Center during a tour of the facility on Wednesday.

Tribune-Star/Joseph C. Garza A scene from the future: Seth Porter, Hulman Center project manager with Indiana State University, sets up artist renderings for the media after a tour of the facility on Wednesday.

A sneak peek inside the $50 million renovation of Hulman Center on Wednesday revealed an expanded spectator view, improved aesthetics and new areas for concessions and restrooms at the Indiana State University facility in downtown Terre Haute.

Exterior improvements to Hulman Center have been obvious for months as original exterior metal panels and walls are being replaced around the 174,000 square foot structure.

As Bryan Duncan, ISU’s director of capital planning and improvements, led a media tour of the building Wednesday, the interior overhaul also was in full swing.

“Hulman Center has been a prominent meeting place for the Terre Haute community for the last 45-years-plus,” Duncan said. “This project will enhance the building and make it more efficient and more useful for folks for the next 50 years. That’s our overall goal for the project.”

Some smaller renovation projects have occurred through the years, Duncan said, but the current renovation is the first overall project.

In addition to exterior and interior finishes, interior renovation focuses on the building’s outdated mechanical and electrical systems, updates to safety systems for fire suppression and catwalk areas and the addition of a new larger freight elevator.

“As you can see, there is a lot of activity, a lot of dust, a lot of commotion. We’ll have it cleaned up for the basketball season, but we’re going to ask for patience from our fans,” Duncan said of the continuing work.

The first home basketball game will be Nov. 30.

Spectators have the same seated sight lines for events, plus some new openings that allow people on the outer concourse walkways to see into the event space.

The orange and yellow seating in the upper deck will be replaced next year with blue seats to match those in the lower deck, which are only a few years old.

The original upper deck seating will remain in place through the coming basketball season.

More natural light comes into the “bowl” from the south, where seating has been removed to open that area to the outer concourse and the future southern entrance. Seating capacity will be a little less than 10,000 due to the removal of seating for the freight elevator and the open concourse.

The original ticket office structure on the south side has been removed and will be replaced with a new main entrance that allows natural light into the concourse and gives a view into the interior bowl.

The construction of the new south entrance will be ongoing through the winter months, Duncan said, and entry points for events will be available at the north, west and east sides.

“We’re a little bit less than halfway through the project both in scope and timing,” Duncan said.

On the west side, a new lounge area has been created as a gathering space for spectators who will have a view into the bowl. That space is versatile, he said, and can be used on its own for smaller events.

New concession and restroom areas are being constructed in the northwest, northeast and southwest corners of the concourse area. The women’s restrooms have more than doubled in size.

Some exterior walls have been pushed out to provide more space for customers waiting at the concession stands, and that will keep the customer lines from backing up into the concourse traffic pattern.

Other lower level areas of Hulman Center, such as the meeting rooms and hospitality area, will also receive new finishes.

Construction bids were awarded in fall 2018. Terre Haute firm Hannig Construction submitted the lowest base bid of $42.8 million. Funding for the $50 million project consists of $37.5 million appropriated by the state and $12.5 million from university gifts, cash reserves and loans.

The project is expected to be completed in late 2020.

TERRE HAUTE - Nathan William Hancock tragically passed away on May 20, 2020 in a car accident. He was born June 29, 1973 in Terre Haute, Indiana. He never lacked appreciation of Earth's beauty and spent a great deal of his time outdoors collecting fossils, artifacts, and rocks (lots of them)…