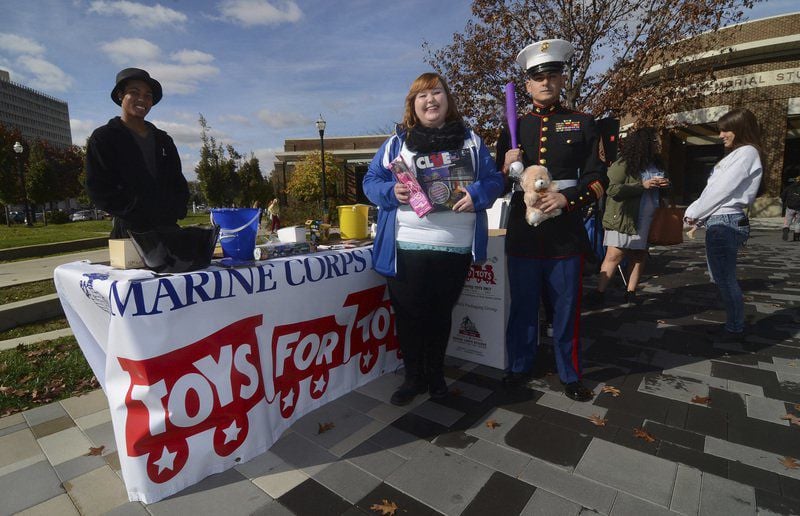 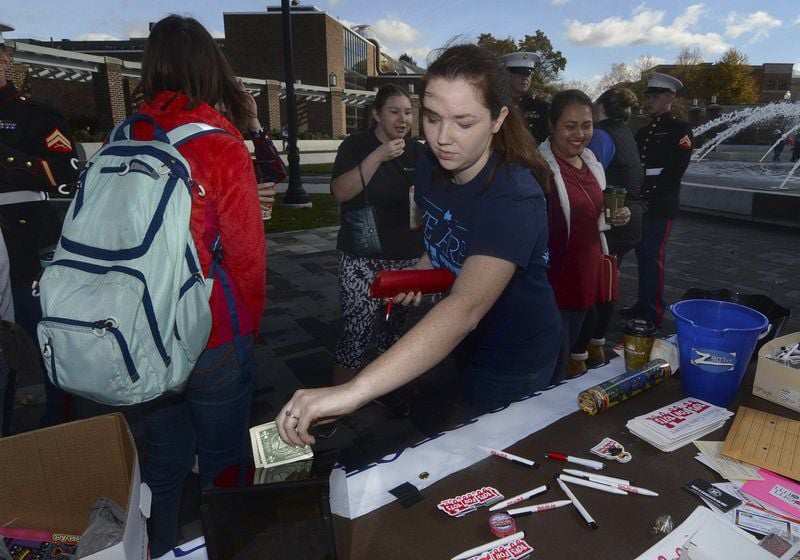 Tribune-Star/Joseph C. GarzaFor the kids: Stephanie Pitman, a second-year Indiana State University PhD student from Frankfort, donates some money to the annual Toys for Tots campaign on Wednesday at ISU.

Tribune-Star/Joseph C. GarzaFor the kids: Stephanie Pitman, a second-year Indiana State University PhD student from Frankfort, donates some money to the annual Toys for Tots campaign on Wednesday at ISU.

As music played in the background at Dede Plaza on a sunny, but cool fall day, Indiana State University doctoral student Stephanie Pitman stopped at a table near the fountain to donate money for a good cause.

The event was “Rock the Holidays,” an inaugural event staged by the student-run radio station WZIS-FM 90.7. The radio station is collecting monetary donations and toys for the Marine Corps Reserve Toys for Tots program, which benefits needy children in Vigo County.

Wednesday’s event included a chance to win prizes provided from local businesses, as well as refreshments and music provided by WZIS during a live remote broadcast. Those who donated were eligible to enter for a Dec. 1 basket giveaway that will include free food and other items.

Toys can be dropped off at the WZIS offices on ISU’s campus, located on the second floor of Dreiser Hall. The toys should be unwrapped and appropriate for children ages birth to 12. According to Toys for Tots regulations, no toy weapons will be distributed.

“We’ll take donations through Dec. 1,” said Baley Halberstadt, student station manager at WZIS-FM 90.7. “We have wanted to do a fall philanthropy for quite some time now. We have been looking for a charity that needs some love, and we found out that Toys for Tots really needs a little bit of love.”

Another student who contributed to the cause was Haley Viewegh, a freshman from Mooresville. “I think it’s really important. I tutor so I know a lot of kids who don’t have as much as other kids. It’s a wonderful chance to be some kid’s hero for the holiday,” she said.

The Marine Corps Reserve in Terre Haute welcomes the ISU effort, said Gunnery Sgt. Alan Maria, campaign coordinator. Initially, the reserve approached the radio station to help promote Toys for Tots,  but the station “took it to the next level and they wanted to do an event,” he said.

Last year, the Marine Corps Reserve and Toys for Tots gave away toys to about 1,400 Vigo County children; this year it hopes to serve about 1,600 kids.

The distribution date is Dec. 15. The effort by the radio station and ISU community “is awesome,” Maria said. Several organizations around campus also have donation boxes to collect toys.

On Nov. 28, there will be one final sign-up date for families to apply for Toys for Tots assistance. Sign-up is 10 a.m. to 2 p.m. at The Salvation Army, 234 S. Eighth St. Applicants must bring photo identification, Social Security cards for everyone in the household, birth certificates or Medicaid cards for children under 18, proof of address (billing statement) and income/benefits for the last 30 days. Any form of government aid should suffice for the income/benefits.