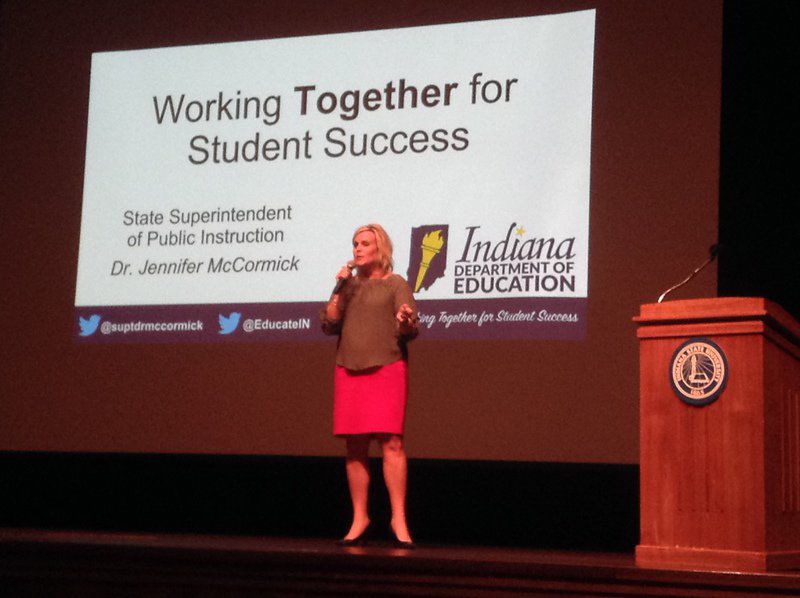 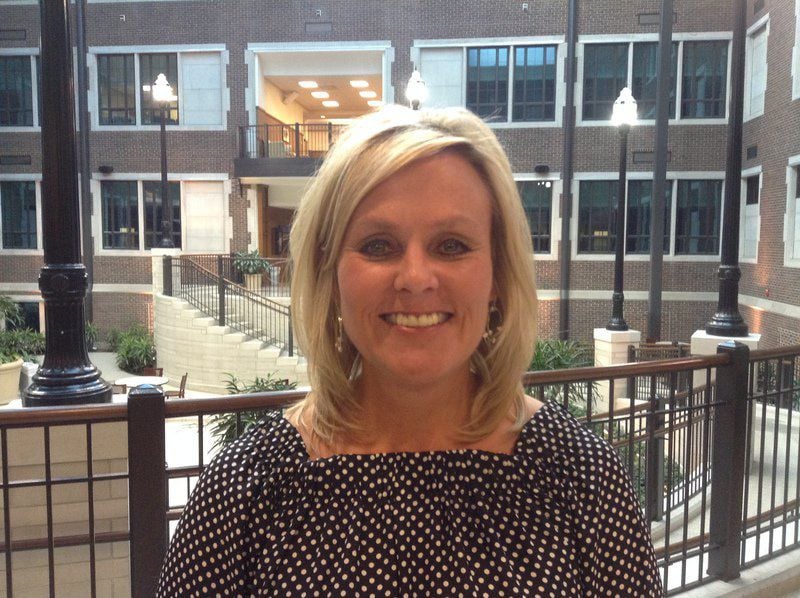 State Superintendent of Public Instruction Jennifer McCormick would like to see kindergarten become mandatory in Indiana, and that’s something she’ll advocate for during the 2018 General Assembly.

“We’re going to go after that legislation. We’re creating a lot of noise,” McCormick said in a presentation Wednesday to dozens of Vigo County and Wabash Valley school administrators and educators at Indiana State University. One of her concerns is children who may benefit from new pre-K funding, but then not follow up with kindergarten.

“If we’re going to have pre-K paid for for our most at-risk, and allow them to take a potential sabbatical and come back to us, that’s a problem,” she said, speaking in the University Hall auditorium.

The state has 7,000 children who don’t take advantage of kindergarten, and of those, 5,000 are considered at-risk, she said. When they start formal schooling, those children face many disadvantages.

In 2017, the legislature provided additional funding for pre-K statewide and “100 percent we support that,” McCormick said.

“But our charge is, don’t let them off the hook at kindergarten. We’ve got to keep them in. Many of you have dealt with families who are highly, highly at risk.”

For those families to get their children up and on a bus and to school may be a chore. Since they don’t have to, “Some don’t do it,” said McCormick, a Republican who defeated Glenda Ritz in last November’s general election.

The purpose of Wednesday’s presentation was to provide an update on educational issues the state faces and also to field questions. On several occasions, she told those attending that the state Department of Education welcomes their comments and feedback. “Please reach out to us,” she said at one point.

She urged them to talk to local legislators about issues of concern. She also told those attending, “You are making a difference.” McCormick obtained her doctorate in educational leadership from Indiana State and said she had a great experience. “It’s great to be back,” she said, in opening comments.

The state superintendent tackled several controversial issues head on, including school choice. “Do I think it’s going to go away? No.” She doesn’t believe the state’s public schools have done enough to “toot our own horn — 97 percent of students are still in public schools.”

But when it comes to school choice, “That ship has sailed,” she said. “I don’t think we’re going to turn back.”

But the state DOE wants to ensure that all schools benefiting from taxpayer dollars provide quality and are subject to the same accountability measures.

“Some states have really tightened up to make sure that quality choice is in place. Others like Indiana have left it pretty open,” she said. “We need that to be a quality choice.”

Private schools also can be more exclusionary in who they admit. She believes that if choice schools are taking public dollars, they should have to meet the same accountability expectations as traditional public schools.

“We are really pushing on that,” she told her audience. Are we going to get momentum on that? We’ll see. There’s not much of an appetite to have that conversation. But more and more are starting to pay attention,” in part because more people are becoming aware of the issue.

McCormick also addressed pending concerns about new federal legislation, the Every Student Succeeds Act, and the state’s graduation rate. Indiana has been told it can’t count the general diploma under federal accountability requirements, which in many cases, will lower the graduation rate. For some schools, “It’s a plummet,” she said.

The state also isn’t sure if the new calculation starts with this year’s freshmen or seniors. One possible answer might be to go to one diploma in Indiana, with different types or pathways, she said. “That would solve the problem the feds are having with us. It would also solve the pathway issue.”

Creating one diploma, with different pathways, would involve the state Department of Education, the Board of Education and Legislature, she said.

She also addressed how the state wants to address the ongoing teacher shortage. One tool would be through a nationwide, web-based recruitment portal. “Many states around us have had great success,” she said.

At this point, Indiana schools “have so many openings ... we’ve got to try something,” she said. “We have many districts that have long-term subs and they have them all year.”

The state DOE also is going to review all licensure issues “to see where are the artificial barriers we’ve put on ourselves,” she said.

Teacher retention also must be addressed, and that includes issues related to teacher pay, which “doesn’t always go over well” when talking to legislators, McCormick said. In the spring, the state DOE plans to ask teachers to participate in a survey “so when I go to the General Assembly, I can give them data from the field.”

She added, “I need something from the field that says ... benefits matter, pay matters.”