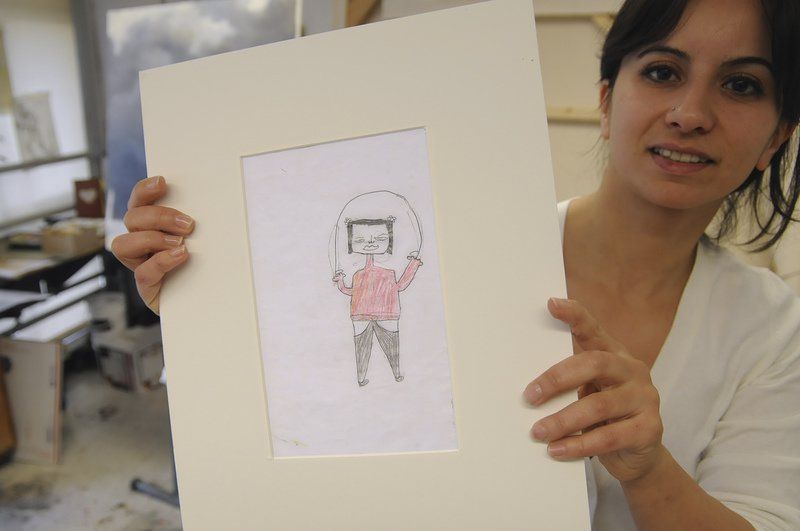 Soulaf Abas shows some of the artwork from Syrian children submitted for her book “Me and You” Sunday afternoon in her campus art studio. 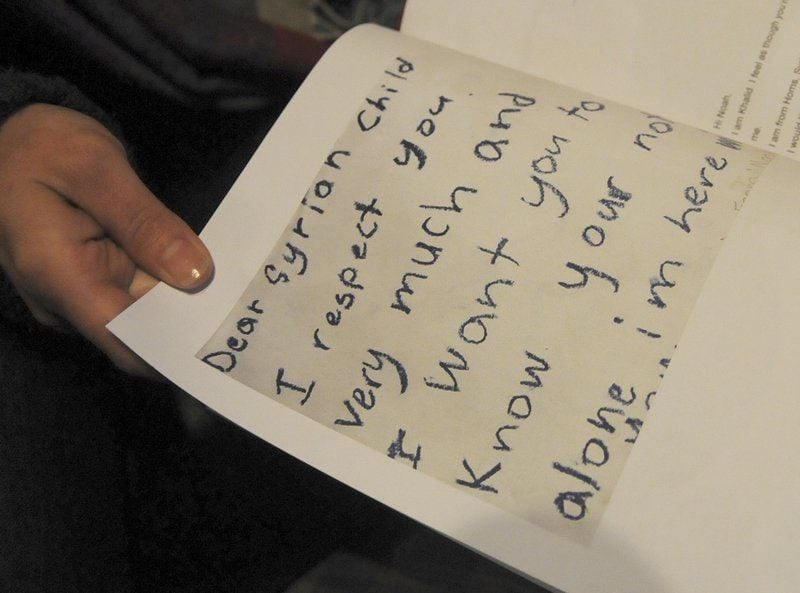 Soulaf Abas, a local artist and educator, shows some of the touching letters from her book "Me and You." 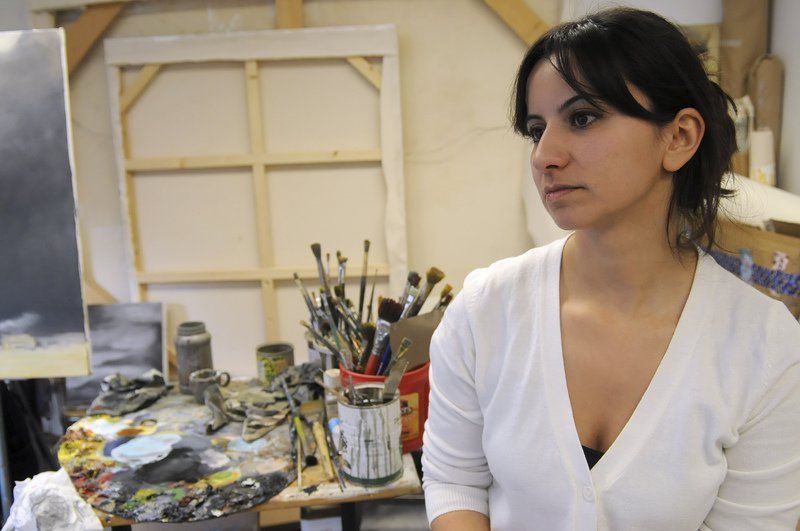 Soulaf Abas produced the children's book "Me and You." A project connecting children from the Ryves Hall with children in war-torn Syria. 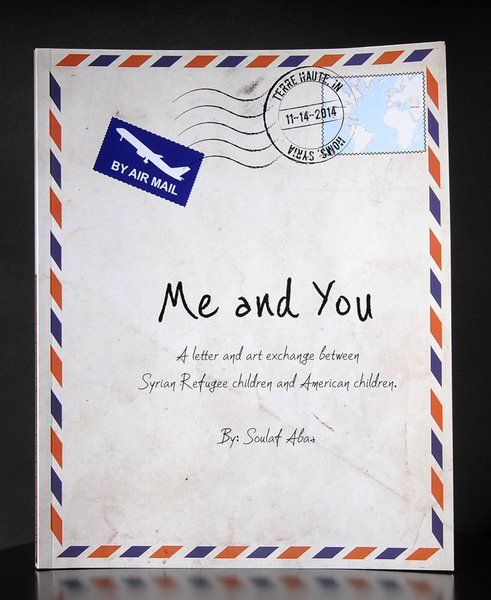 Soulaf Abas' new book is "Me and You." 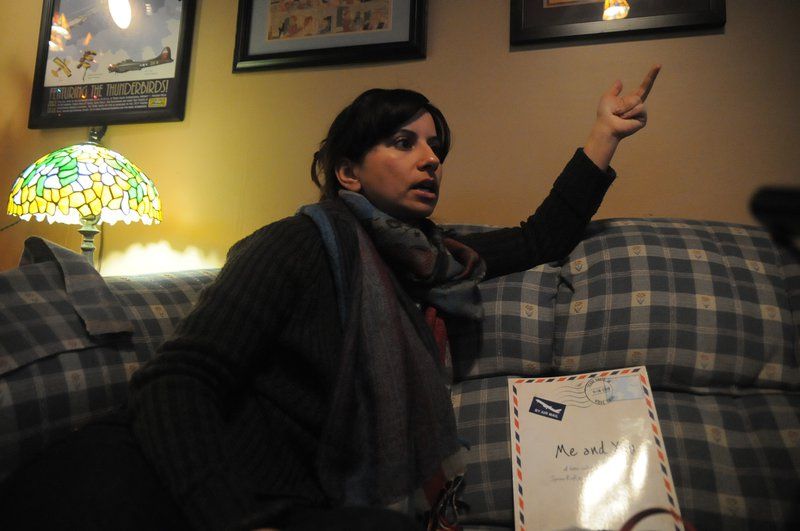 Local artist and educator Soulaf Abas talks about her book during an interview with the Tribune-Star Friday evening at Corner Grind.

Soulaf Abas shows some of the artwork from Syrian children submitted for her book “Me and You” Sunday afternoon in her campus art studio.

Soulaf Abas, a local artist and educator, shows some of the touching letters from her book "Me and You."

Soulaf Abas produced the children's book "Me and You." A project connecting children from the Ryves Hall with children in war-torn Syria.

Soulaf Abas' new book is "Me and You."

Local artist and educator Soulaf Abas talks about her book during an interview with the Tribune-Star Friday evening at Corner Grind.

What do Syrian and American children have to say to each other?

A new book, compiled by an area artist and art educator Soulaf Abas, offers a glimpse into the thoughts and opinions of children living in two parts of the world.

“Me and You: A Letter and Art Exchange between Syrian Refugee Children and Children from Terre Haute, Indiana” documents the long-distance correspondence between the children.

In the letters, the children talk about their daily lives, interests and dreams.

“I think this is pure love,” Abas said of the exchange.

The book features letters and artwork from 27 Terre Haute children who attend Ryves Youth Center, at the corner of 14th and Locust streets, and responses from 30 Syrian refugee children living in Amman, Jordan, a country neighboring Syria to the south. Pictures of the kids are also included in the compilation.

“All the children refugees in Jordan are kids who had to flee Syria during the time of the revolution [in March 2011] because they lost their homes, they lost their families, and they had to run for their lives,” Abas explained to the Tribune-Star in an interview.

In February 2014, Abas volunteered to teach at the youth center, which is known to serve many at-risk kids in the area. She told them about Syrian kids and showed them pictures of Syria before and after the war, according to the book’s introduction.

When the children in Terre Haute learned of the dire conditions facing children in Syria, the kids felt the desire to express themselves and to help.

“That’s how the letter and art exchange started,” Abas wrote in the book.

The letters from Terre Haute children — addressed to “friend” or “kids” not only talked about their lives but also expressed sympathy for their Syrian counterparts’ plight.

Mohammed, 8, of Homs, Syria, wrote a response telling him that he loves painting, soccer and the color blue.

“I also love you very much, and I am very grateful for your letter,” he concluded.

Many of the letters expressed desires to meet each other.

“One day I want to meet you, and I hope we can be great friends,” wrote Madyson from Terre Haute.

Another boy named Mohammed, who is 12-years-old from Gouta-Damascus, told another letter writer that he “would like to come visit you in the U.S.”

“I wonder what your life would be like if you ever get the chance to live here for a month,” pondered 16-year-old Holly. “You are the most amazing person in the whole world. Be happy with the life you have and never let anything hurt you.”

Although, they had never met, the kids expressed kindness and love in their letters.

“Your the bestfriend that I never met,” Holly wrote.

Like several of the letters, the 10-year-old from Gouta-Damascus, Syria, also expressed her grief for what she has lost.

“I miss our house in Syria, and all the people who didn’t do anything wrong,” Douaa wrote, in Arabic, which was translated into English by Abas. “I really miss my uncles. I want to go home.”

While many of the kids exchanged artwork depicting animals, plants, home, and nature, some Syrian kids also drew their memories of when they lost their homes.

“I made you a drawing of how when we were home we were attacked in an air strike,” Douaa wrote.

A native of Damascus, Syria’s capital, Abas hand-delivered — and read — the letters and artwork to the kids. She delivered the letters from the Terre Haute kids to the Syrian kids in Jordan when she visited the country over the summer. Then, while working with kids in Jordan — who were participating in art therapy — she presented the letter, artwork, picture of the children who wrote it, and a translation of the letter.

The kids were “surprised” and happy that the kids from another part of the world were compassionate and wanted to be their friends, Abas said.

In working with the kids during the letter exchange, Abas said she encouraged them “to be who they are.”

She took the responses — pictures and all — back to the Terre Haute children in September. Upon receipt, some of them immediately sat down and wrote responses, Abas said. She hopes to deliver those letters at a later date.

Refusing to be called the author of the book, Abas said, “I am the messenger, more than anything.”

The letter exchange and book are part of a project that Abas started a year ago, known as “Seen for Syria,” an art therapy/education program for the Syrian refugee children in Jordan. Abas, an adjunct faculty member at Indiana State University, was grateful for the collaboration with Salaam Cultural Museum and Salaam-Malki Center, and the support by Arts Illiana, ISU Center for Community Engagement, the Indiana Arts Commission, and other agencies.

But Abas’ passion for helping the children of her native land does not end there. She plans to donate 100 percent of the proceeds of the book to the Syrian children who participated in the correspondence, she said. A book signing is scheduled for 6  to 9 p.m. Thursday at the Swope Art Museum, 25 S. Seventh St. in Terre Haute.

Copies of the book will be available at the event, but can also be purchased from her website www.soulafabas.com.

“The idea behind this book is simple: Enable children in two different places in the world ... to communicate with one another and see what happens,” Abas wrote in the book’s introduction. “What happened is a book that embodies pure joy and hope. Children on the opposite sides of the world made a difference when diplomats fail to do so every day. They created hope where politics create chaos. They made friends when war only makes enemies.”