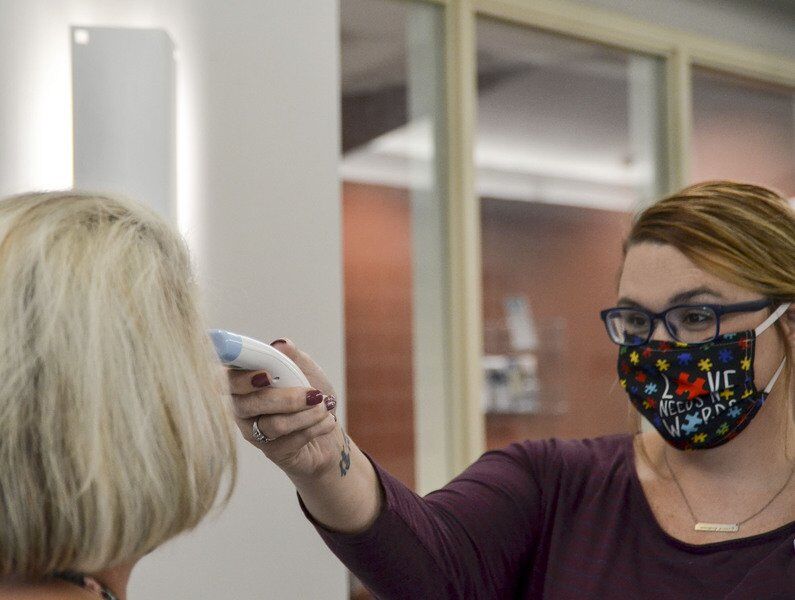 Tribune-Star/Austen LeakeScreening: To enter any Union Health building, patients and visitors will be required to have their temperature taken and answer other assessments. 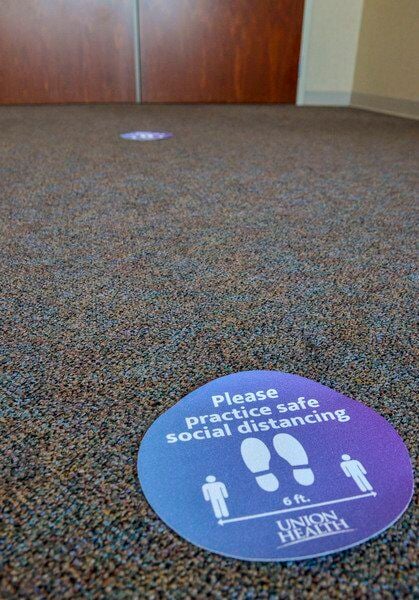 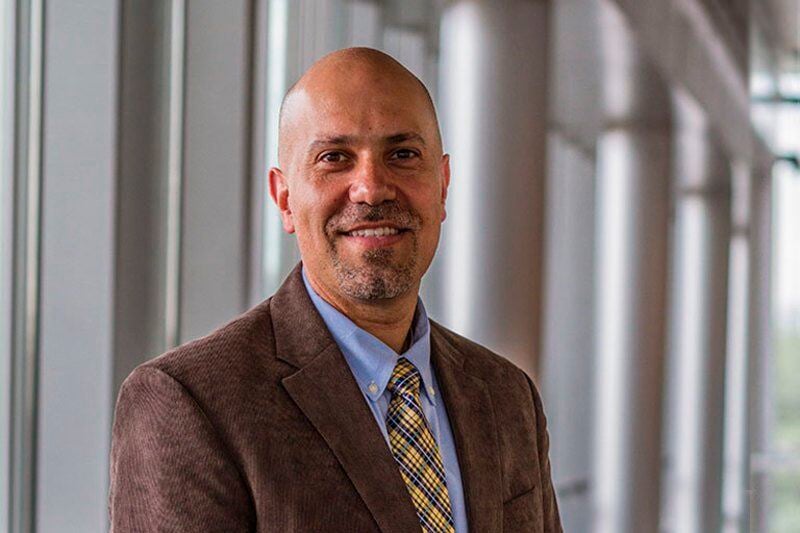 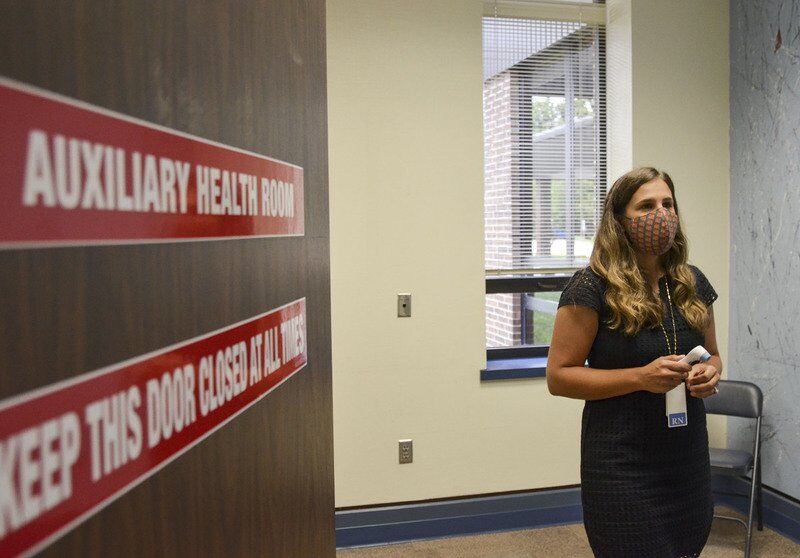 Tribune-Star/Austen LeakeSchool safety: Eleni Miller, Vigo County School’s chairperson for nursing, explains that all VCSC schools will be using additional rooms, like the one seen here, apart from the regular nursing rooms to conduct any COVID-19 related assessments. 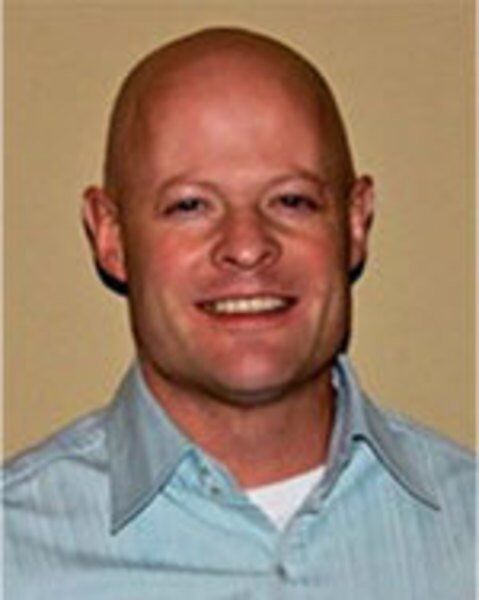 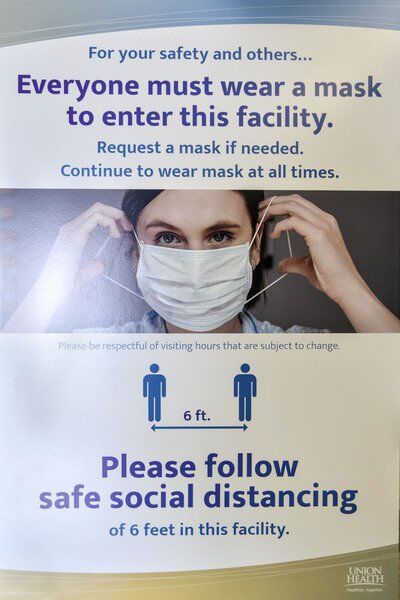 Tribune-Star/Austen LeakeScreening: To enter any Union Health building, patients and visitors will be required to have their temperature taken and answer other assessments.

Tribune-Star/Austen LeakeSchool safety: Eleni Miller, Vigo County School’s chairperson for nursing, explains that all VCSC schools will be using additional rooms, like the one seen here, apart from the regular nursing rooms to conduct any COVID-19 related assessments.

The surge of novel coronavirus cases in the past two weeks emphasizes the continued need for social distancing, handwashing and masks, says the county’s top health official.

“Our numbers continue to rise with positive cases, and the good majority of people are symptomatic people,” said Dr. Darren Brucken, the county health commissioner. “It’s here. It’s in the community.”

The majority of the new cases are in people who are not masking or socially distancing, he said.

“That shouldn’t come as a surprise to people,” Brucken said, using the example of relaxed vigilance as parents permit pool parties with young people having sleepovers and then taking coronavirus exposure back home to spread among their families.

“It doesn’t matter if you’re young and healthy and going to get through it,” Brucken said. “It’s about the other people you will expose who can’t get through it.”

Positive cases coming into the county’s hospitals are creeping up, he said, and that is reflective of the trend nationwide.

Seven counties feed into the healthcare hub of Vigo County.

As more cases of COVID-19-related complications come into emergency rooms, the system could get overwhelmed, Brucken said, because other medical emergencies – such as heart attacks, strokes, crashes – will continue to occur.

The governor’s mandate to mask up has come at the right time, if not a little bit late, he said.

“We are seeing that most cases are related to one another,” Brucken said. “We are not scratching our heads wondering where it’s coming from, and that’s the result of contact tracing where we are making the connections to trace exposures.”

Tracking down exposures is time-consuming, he said, but it is the best way to keep track of the virus spread.

With the start of school approaching, many parents and guardians are apprehensive about sending their children back to school.

However, Brucken said, the medical community consensus is comfortable with schools opening based on the worldwide experiences in Europe and Asia where precautions have been utilized.

“Across the board, it’s not been a big problem for schools who use the precautions,” he said.

With the mask mandate in place, Brucken said another concern that continues is people who do not wear the masks appropriately, such as below the nose.

“The next national plea is going to be ‘Don’t Expose the Nose,’” Brucken said.

The mask is important as a barrier that has lowered risks of illness.

“You’re not wearing a mask for you. You’re wearing it for everyone else,” he said.

Now that masking is mandatory  across the board in Indiana, businesses’ response to requiring masks must be non-negotiable even for stubborn patrons who object. As an example, Brucken points out that businesses have long had a ban on smoking by customers, as mandated by the state.

“If you’re operating a store and someone walks in smoking a cigar, you tell them they can’t do that. This is the same. So you can demand compliance,” he said.

The communities of Indianapolis and Bloomington have already had locally mandated mask-wearing, and the buy-in has been good by the public. Statewide buy-in by the public is now important.

“It’s not going to get considerably better until we have compliance and a vaccine,” Brucken said.

A statewide random sample study on the spread of COVID-19 showed more people have been infected than the state testing numbers show.

That survey conducted in recent weeks by the IU Richard M. Fairbanks School of Public Health showed participants who reported living with someone who tested positive for COVID-19 had a much higher likelihood of testing positive. That wasn’t surprising.

But those who used masks and social distancing while living with positive cases were less likely to be infected than those who did not take precautions.

“The percentage of participants who had a positive test result was 15 times higher among participants who lived with someone who had received a diagnosis of COVID-19,” said Dr. Nir Menachemi, lead scientist in the study. “Coupled with the low statewide prevalence, we believe that social distancing efforts helped to minimize the spread of COVID-19 and is an important measure in preventing transmission.”

Menachemi said he does not believe Terre Haute is going to be any different than anywhere else in the nation as far as risk.

“The only thing we know that works is doing the right thing,” Menachemi said.

He also noted that for the reopening of schools, the people most vulnerable to the virus will be the teachers, school staff, bus drivers, cafeteria works and the family members of students who spread the virus if they do not wear masks, social distance and wash their hands.

Crowds in cafeterias and gymnasiums are not a good idea, he noted, but school can be accomplished with adjustments.

“There are sensible approaches,” Menachemi said, “but it requires everyone’s compliance.”

The study also showed that minority communities around the state are being hit harder by the virus.

Part of that, he said, was connected to the likelihood that minorities were more likely to be in essential jobs where the occupation did not have layers of protection.

As for the higher prevalence in Latino communities, the study found a connection among people living in a multi-generational household.

Many more employers are now providing masks and protective gear for their employees.

At the Vigo County Health Department, spokesperson Roni Elder said fewer requests are coming in for masks. That could be because people have already made or acquired masks, she said.

Disposable masks should be worn only two times at most, while cloth masks that are washable will have a longer lifespan. Any mask that catches a sneeze or cough should be either tossed out or washed, she noted.

Meanwhile, Elder said testing continues at multiple sites around the county, including at Union Hospital, Regional Hospital and CVS stores. Test results are taking about three to five days from some sites, and up to two weeks from CVS sites, she said.

A list of testing sites is available on the county health department web page at https://www.vigocounty.in.gov/department/index.php?structureid=27