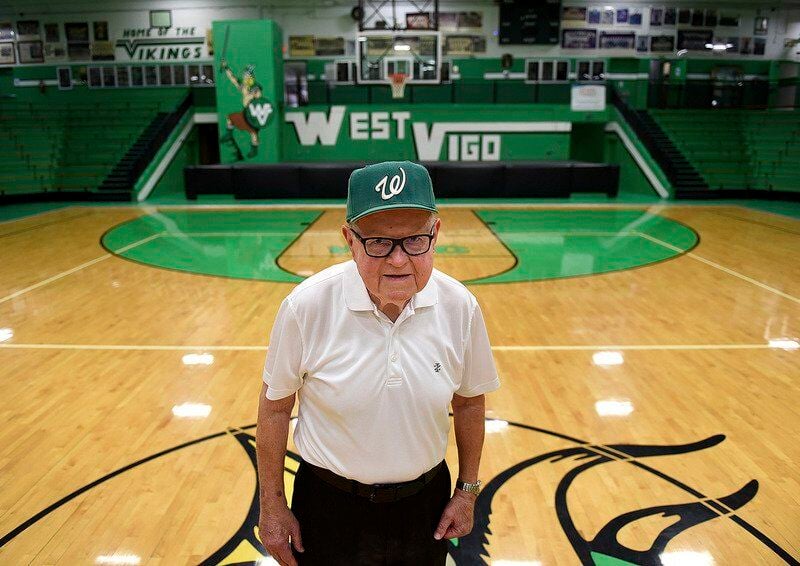 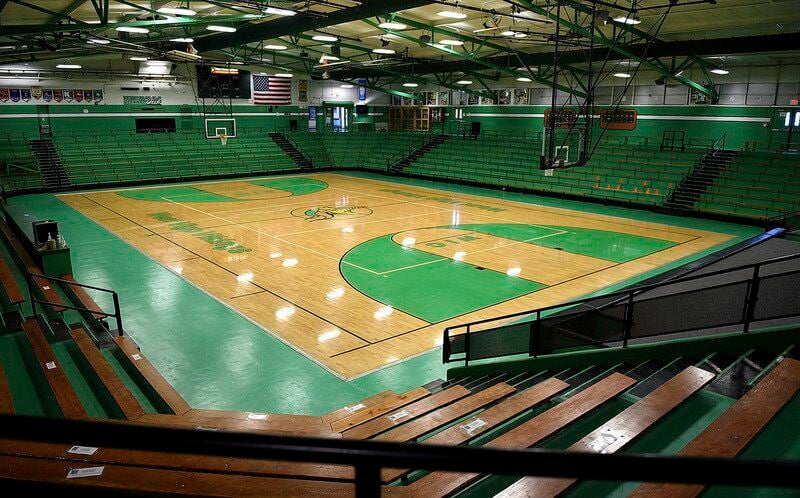 Tribune-Star/Joseph C. Garza Not a bad seat in the house: The Jim Mann Green Dome opened in the fall of 1960 along with the rest of the then-new high school, which merged Valley and Concannon high schools. It can be seen here on Tuesday afternoon. 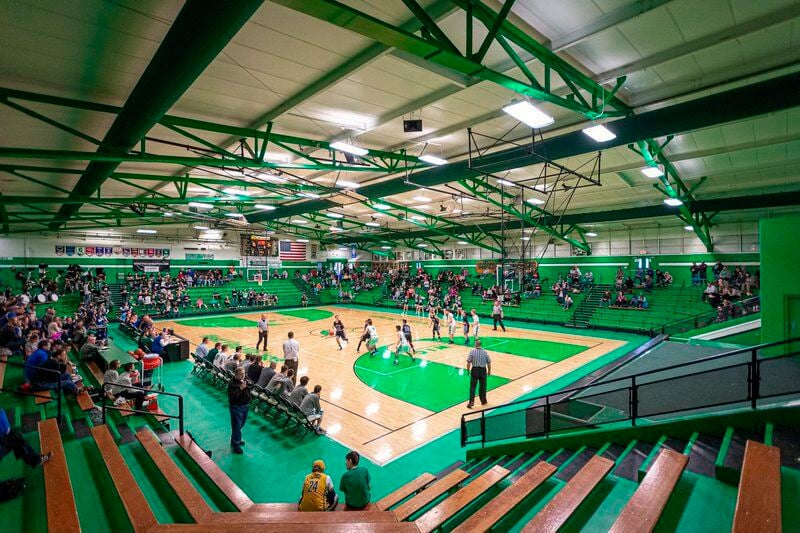 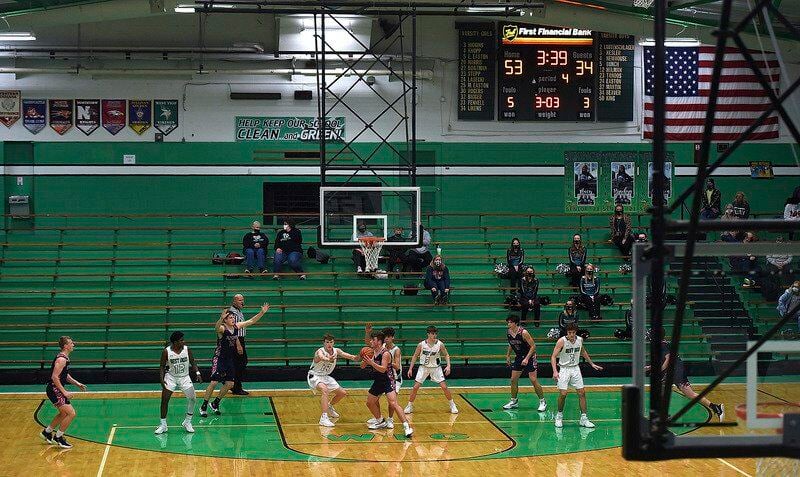 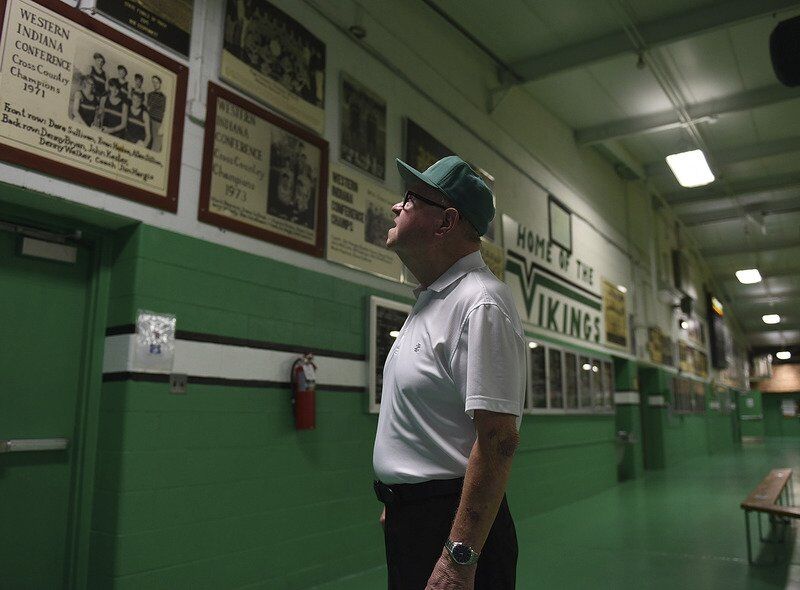 Tribune-Star/Joseph C. GarzaThirty years: Jim Mann was athletic director of West Vigo High School for 30 years. Here, he looks for familiar faces in team photos from the 1970s in the Jim Mann Green Dome on Tuesday.

Tribune-Star/Joseph C. Garza Not a bad seat in the house: The Jim Mann Green Dome opened in the fall of 1960 along with the rest of the then-new high school, which merged Valley and Concannon high schools. It can be seen here on Tuesday afternoon.

Tribune-Star/Joseph C. GarzaThirty years: Jim Mann was athletic director of West Vigo High School for 30 years. Here, he looks for familiar faces in team photos from the 1970s in the Jim Mann Green Dome on Tuesday.

The West Vigo High School gym has a special place in the heart of former athletic director Jim Mann.

“That was basically my life for 30 years. My kids went to West Vigo and they played sports. We’d be there together so much of the time. It was a special part of our lives,” said Mann, now 80.

So, it meant a lot to him to learn the Green Dome ranked third in a statewide contest titled “Indiana’s Best High School Gym” conducted by the Indiana Destination Development Corp.

The Green Dome was one of 68 gyms selected by a panel of experts coordinated by the Indiana Basketball Hall of Fame. The three-week contest had 67,579 votes, and participants could vote once per day.

Visit Indiana, which is part of the Development Corp., announced the winners Monday for the special edition Best of Indiana people’s choice campaign.

The top three vote-getters were:

Mann said he voted “most days” of the three-week contest.

A news release announcing the winners stated,  “For nearly 60 years, the Jim Mann Green Dome has been the only home to the West Vigo High School Vikings since its inception [opening in fall 1960]. The 2,600-seat venue is of the ‘sunken gym’ style.” It noted that Larry Bird did his student teaching at the high school following the 1978-79 season with Indiana State University.

What makes The Green Dome special? “The gym capacity is small, and every seat in the house is excellent,” Mann said. “Everyone feels like they are right down on top of the action and close to the floor.”

The Connersville High School Spartan Bowl can seat 5,134, while the New Castle Fieldhouse has a seating capacity of 8,424, numbers that likely gave those schools a boost in the contest, Mann said. Also, the Indiana Basketball Hall of fame is located in New Castle.

Just as the name suggests, the color green dominates the West Vigo gym, from floors to walls. The school colors are green, black and white.

The gym opened in the fall of 1960 along with the rest of the then-new high school, which merged Valley and Concannon high schools. Students from Fayette High School joined them in fall of 1961.

He credits John Orr, who eventually became West Vigo’s assistant principal, with adding some green to the inside of the building during the 1980s.

In a June 2020 interview, former athletic director Mike Miller recalled that the “Green Dome” nickname started gaining momentum around the turn of the century [around 2000]. Then-principal Dave Chapman pushed for the gym to take on more of a green look in the early 2000s.

The recent recognition through the state contest “is always a cool thing,” said current West Vigo Principal Ryan Easton. “The Green Dome is kind of our identity, not just for the school but for our community. It’s a legend, that’s for sure.”

He described it as a “great spectator gym. People who didn’t even go to school here remember playing in that gym.”

But it’s not just about sports.

The Green Dome “has seen its share of exciting moments. Anywhere from basketball games, wrestling matches, graduations, daddy/daughter dances, Hall of Fame banquets, funerals. It’s been the home to many, many things,” Easton said.

Mann recalls the years before the gym had air conditioning. At graduation, “Several of us [staff] would get stationed around the gym and watch for people who might get overheated.”

The school district “has done a great job of maintaining the building and providing the means to keep it nice,” he said.

The third-place finish in the state contest reflects the importance of the Green Dome and the school to the West Terre Haute community, he said.

“With so many communities losing their identities when public schools close, let’s hope this serves as a beacon to leaders about the importance of community schools,” said James Mann II, a teacher at South Vigo High School.

A strong social media campaign catapulted West Vigo from sixth place on March 11 to third place in the final standings, he said.

“The town of West Terre Haute and Sugar Creek Township have always valued community,” James Mann II said. “Whether it is cleaning up the town, hosting a fundraiser for a needy family, or supporting the school, the citizens of western Vigo County work together to accomplish many tasks.”

According to a “best gyms” contest news release, the top 10 best high school gyms in Indiana were voted as follows: