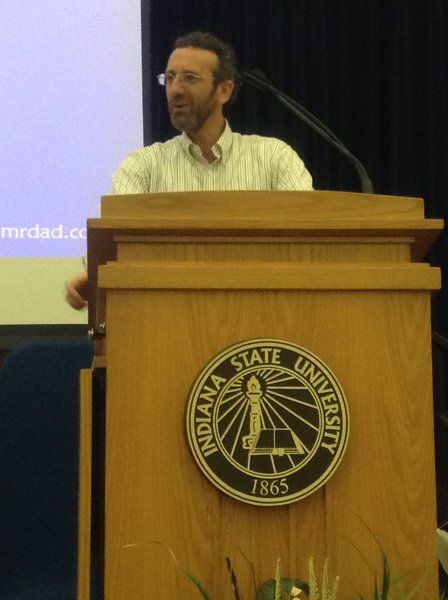 Tribune-Star/Dianne Frances D. PowellMr. Dad: Author Armin A. Brott talks to students about parenthood and the importance of being a role model during a Wednesday presentation at ISU's Hulman Memorial Student Union. 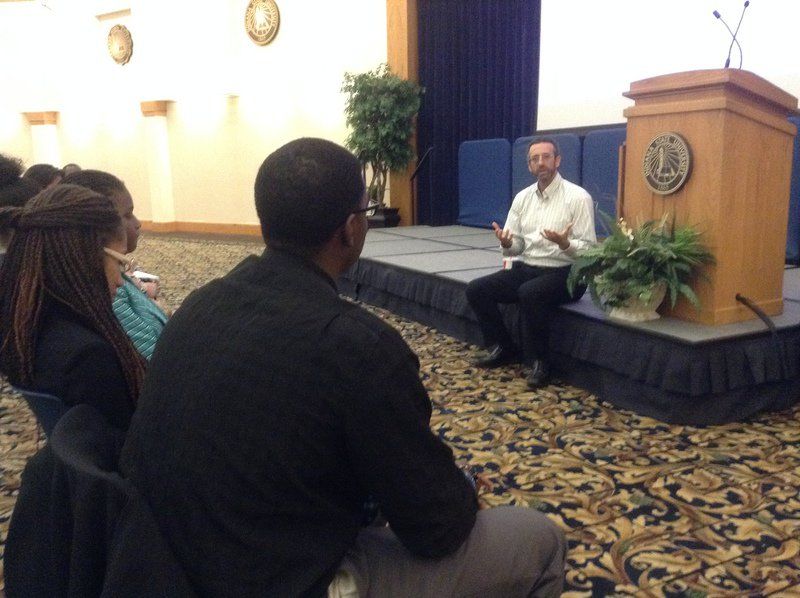 Tribune-Star/Dianne Frances D. PowellMr. Dad: Author Armin A. Brott talks to students about parenthood and the importance of being a role model during a Wednesday presentation at ISU's Hulman Memorial Student Union.

Book author and fatherhood expert Armin A. Brott a.k.a. “Mr. Dad” urges future parents to be good role models for their kids.

Speaking to more than two dozen students on Wednesday at a meeting room in the Indiana State University Hulman Memorial Student Union, Brott gave the presentation “Thinking About Parenthood,” which discussed not only about being a good role model but also what to expect from parenthood.

“Being a role model is one of the most important things you can do,” he told the students. “I think it’s something to think about now.”

“As you’re going through life and thinking about parenthood, think about the kinds of things that people will see you do... and the kinds of examples you’re setting,” Brott, who traveled from California for the event, added.

Aside from this, Brott talked about how parenting has changed over time, the cost and benefits of parenthood, and its impact on a person’s life.

Although, Brott spoke primarily from a podium, he asked the audience members various questions. When he asked how many of them have kids, only a couple of hands went up. When he asked who had an idea of what impact parenting would have on their finances, career and relationships, very few hands shot up.

Brott, who has discussed this topic on a number of TV and radio shows, outlined to the students some of the costs of parenthood: both in the finances and lifestyle.

He said research show it costs about $250,000 to raise a child. Plus, the parents give up a lot of individual time that would have been spent on hobbies, relationships and career.  There is also going to be less intimacy between partners, he told the students.

“You’re giving up some of that time because it’s all gonna go to the kids,” he added.

But there are also many benefits to being a parent, Brott, a father of three, said.

“The sense of pride and satisfaction you get is wonderful,” he said. In addition to satisfaction, there are also various learning opportunities as well as being able to carry on the family line.

But parents — particularly fathers — face many obstacles. One of them is the stereotypes attached to fathers, when, for example, they have to take their daughter to a men’s bathroom at a store. Or the obstacles associated with balancing work and home. To overcome these, Brott said that communication is key.

During the hour-long event, which started at 7 p.m., the students participated by asking questions. One student, Garien Woods, who is also president of the African-American Student Educators, introduced the speaker and asked a couple of questions. He asked what was the hardest moment Brott has experienced as a parent and what is his advice to fathers to get his wife or partner to trust him with parenting responsibilities.

In answer to the latter question, “she needs to ... go back to the feeling of trust,” Brott said.

Brott was in Terre Haute this week to speak at three different venues. Before going to ISU, he spoke Wednesday afternoon about issues facing single parents in the military at a presentation held at the Indiana Air National Guard’s dining facility at the Terre Haute International Airport-Hulman Field.

Today, he is scheduled to give a presentation about single parents from 6 p.m. to 6:45 p.m. at Sarah Scott Middle School cafeteria, 1000 Grant Street in Terre Haute.