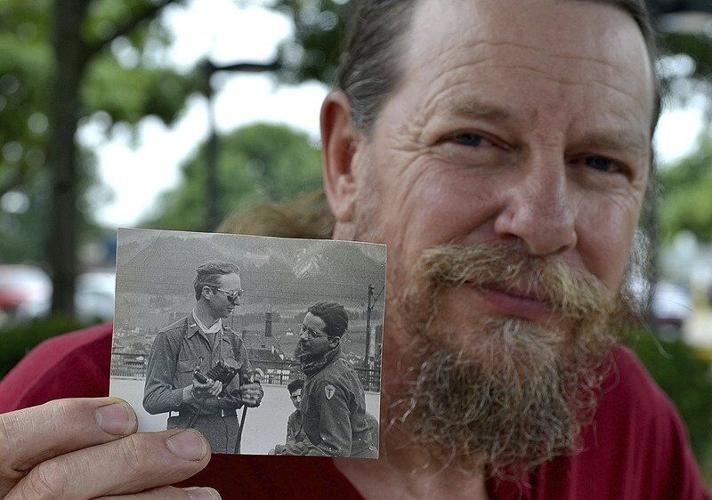 Tribune-Star/Joseph C. GarzaBlack & white memories: George Pfister’s father, Charles, served during World War II and when George became owner of his parents’ home on Poplar Street, he found a box of letters and this photo of his father holding a camera during the war. Here, he displays the photo during an interview on Thursday with the Tribune-Star. 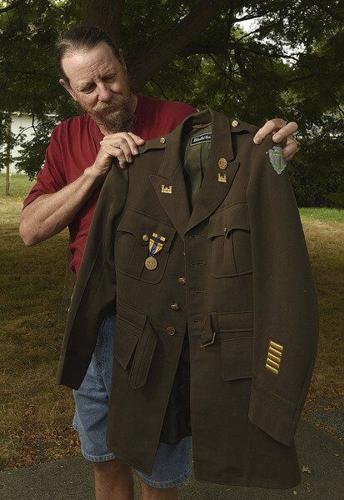 Tribune-Star/Joseph C. Garza Proudly served: George Pfister holds up his father Charles' officer's jacket from World War II at his home on Friday. Pfister's father and five uncles served in World War II and Pfister has amassed a large collection of his father's belongings from that period. 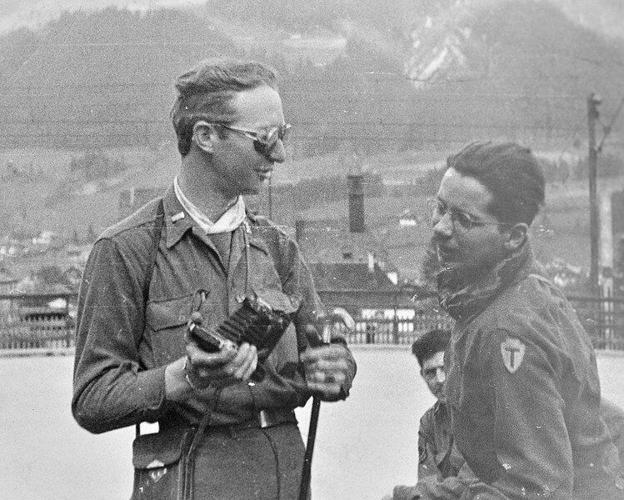 Photo courtesy of George Pfister Image from a different time: This photo shows Terre Haute native Charles Pfister in his Army uniform with fellow soldiers during World War II. Charles' son, George Pfister, discovered the photo in a collection of his father's letters. 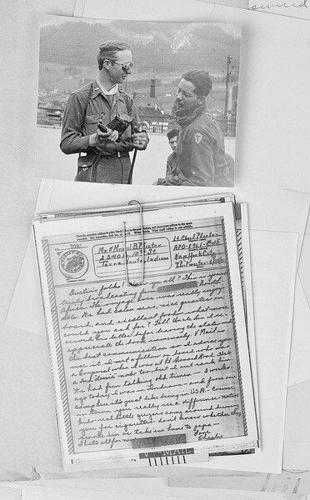 Tribune-Star/Joseph C. GarzaPost cards from the front: Among the items George Pfister has collected from his father's time in World War II are a photo of him with a camera and dozens of letters, some of which he has digitized. 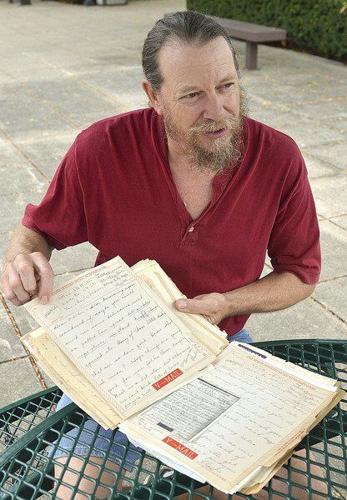 Tribune-Star/Joseph C. GarzaHe stayed in touch: George Pfister describes the content of one of his father Charles’ letters to home during World War II on Thursday during an interview at The Meadows. 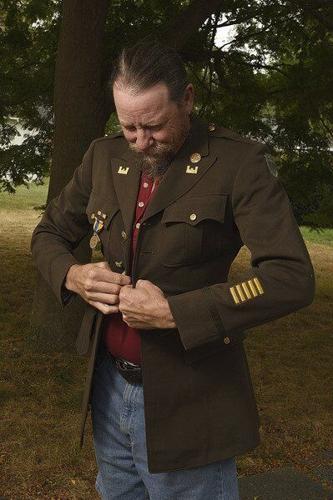 Tribune-Star/Joseph C. GarzaEveryone was thinner back then: George Pfister tries to fit into his father's  Army officer's jacket at his home on Friday. Pfister has amassed dozens of his father's letters to home, medals and uniforms from the World War II era. 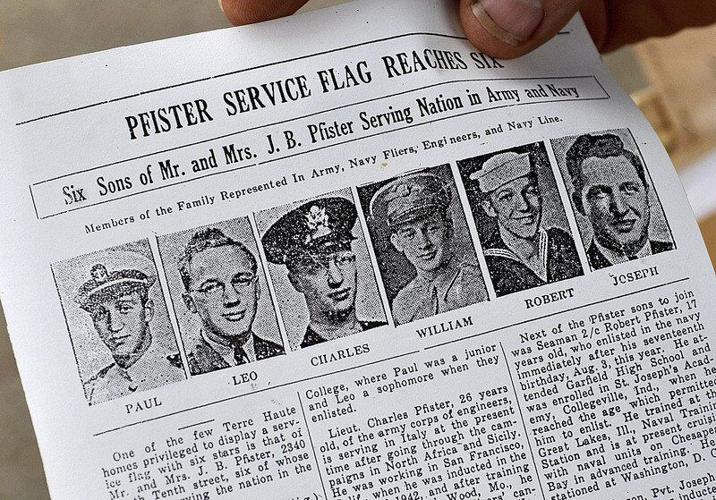 Tribune-Star/Joseph C. GarzaEvery son served: George Pfister found this newspaper article about his father’s and his uncles’ service in the military during World War II. 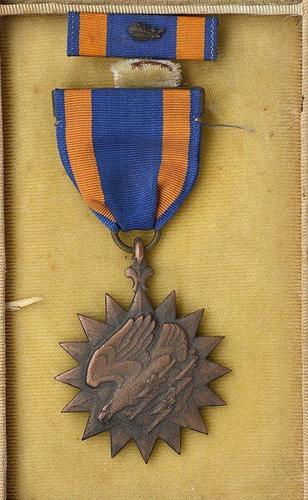 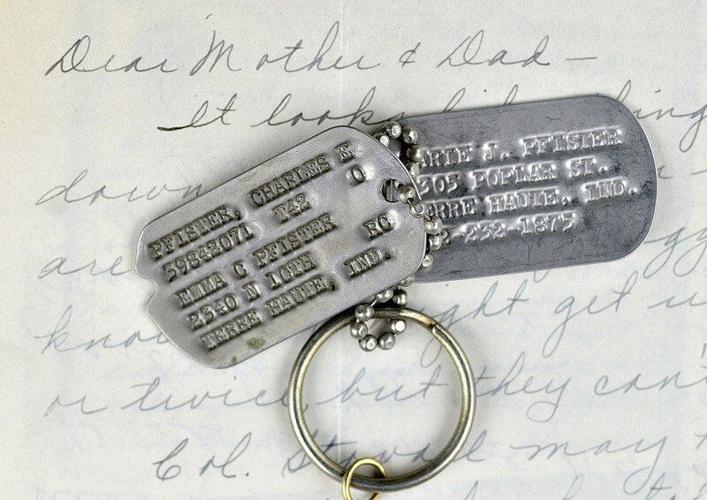 Tribune-Star/Joseph C. GarzaLetters home: George Pfister’s father and mother served in World War II, and several of their belongings from that period are in George’s possession. Here, Charles Pfister and Marie Pfister’s dogtags can be seen over a letter written by Charles to his parents during the war.

Tribune-Star/Joseph C. GarzaBlack & white memories: George Pfister’s father, Charles, served during World War II and when George became owner of his parents’ home on Poplar Street, he found a box of letters and this photo of his father holding a camera during the war. Here, he displays the photo during an interview on Thursday with the Tribune-Star.

Tribune-Star/Joseph C. GarzaPost cards from the front: Among the items George Pfister has collected from his father's time in World War II are a photo of him with a camera and dozens of letters, some of which he has digitized.

Tribune-Star/Joseph C. GarzaEveryone was thinner back then: George Pfister tries to fit into his father's  Army officer's jacket at his home on Friday. Pfister has amassed dozens of his father's letters to home, medals and uniforms from the World War II era.

In a folder labeled “dads letters” pulled from a box of the same name, George Pfister has a nearly complete record of his father’s life as a young man and soldier.

From leaving his Terre Haute home in search of something more in California, to Africa, Italy and a pair of Bronze Star awards for fighting Hitler’s armies in France, George can live vicariously through the hundreds of letters and notes his father wrote.

George said his father, Charles Pfister, didn’t talk much about his service in World War II, a common refrain for many baby boomers.

And what time they had together before then was a typical scene of a young man’s cocksure attitude assuring him his “old man” didn’t have much in the way of teaching him.

“Dad was just dad and all my uncles were just uncles; they were normal guys to me,” George said as he fingered through his box of memorabilia.

“I had no knowledge of their military service, all I understood was that my uncle had a bum leg and that he’d hurt it in the war. They were all just regular guys.”

They were anything but.

But unlike the he young man who thought there wasn’t much he didn’t know, George is fortunate that his father still lives  through his letters and can still pass on lessons hard earned.

And now he knows to listen.

The letters, correspondence between Charles and his parents J.B. and Emma Pfister, begin with Charles leaving his home in Terre Haute for San Francisco.

He didn’t immediately run to a military recruiters office, but on May 22, 1942, he wrote home:

“Dear Mother, the time has come — the hour is at hand — alas and alak, I must join Uncle Sammy’s army.”

In the two pages penned that day, Charles seemingly understood the angst his decision might cause his mother.

“You don’t know what a grand feeling it gives a fellow to have a chance to defend the very things that his folks have always fought and lived for,” Charles wrote.

“Paul, Leo and myself make you a 3 star Mother — it’s you we are fighting for — and let me tell you, we’ll really do our best 10 fold. Before it’s over you should have 6 or possibly 7 stars — the proudest Mother in the land.”

Charles reported to Fort Leonard Wood, Missouri, for basic training and then to Fort Belvoir, Virginia, for engineer training in 1942. Upon graduation from his schooling at Fort Belvoir, Charles was commissioned a second lieutenant.

In June 1943, Charles was assigned to 111th Engineer Combat Battalion, 36th Infantry Division, and shipped out to North Africa to join the Army’s campaign and to prepare for the invasion of Sicily and Italy.

“The life so far is real nice when you consider we’re at war,” Charles wrote to his parents July 4, 1943. “We live in tents but have ample room. Movies are shown nightly and although they’re old shows it’s nice to see them again.”

Charles’ unit then unit left North Africa for the invasion of Italy. He would later write home to his father:

“... Yours truly was bathed in the baptism of combat. Being green of the game I didn’t fully realize what it was all about. My mission was to take 3 men and establish a water point for the fighting troops, so having carefully studied the maps on board ship I had no trouble orienting myself when we landed.

“.. I dug nine foxholes that day — 8 with my helmet and the ninth with a pick and shovel. By that time I had completed my mission and found the company.”

Across Charles’ hundreds of letters home, he never offers gore. He tells his parents of his mission and its outcome, but spares them the bloody in-between.

But not all letters home shared Charles’ first-hand experiences on the front line. In letters to his mother, he often talked of going to mass and of the power of prayer.

“It’s really a nice city — and St. Peters is the most beautiful church I’ve ever seen. Went to mass there one morning. A lot of the men had audience with the Pope, but I didn’t get in that day.

“I did see him when we 1st hit Rome — he gave a talk outside one evening. Of course I was quite a long ways off and I don’t believe he recognized me.”

Charles and his unit would go on from the Italian campaign to assist in the allies’ retaking of France in 1944.

For his action is support of combat operations in Sept. 1944, Charles was awarded a Bronze Star. He would later win another for “heroic achievements in combat.”

Charles advanced on and destroyed an enemy roadblock that was preventing a tank unit from supporting nearby infantry.

His award citation reads in part:

“As he and his men moved across flat open terrain, they were exposed to enemy observation and were subjected to sniper fire. Lt. Pfister continued dauntlessly forward to the block and began directing his men in placing the charges.

“The enemy opened fire with a machine gun and seven rifles, but he ignored the direct fire and” oversaw the destruction of the block.

Anything but a regular guy, George has come to learn.

“The word sheepish comes to mind about how I felt reading the wartime letters and reflecting on the times I talked back to him as a teen,” George said.

“Regretful is a little stronger term, ashamed as well. But those aren’t the defining thoughts, just a small part of the retrospect. “

Charles’ letters home run throughout the duration of the war and include his unit’s last campaign on the German-Austrian border in 1945. His letters also continued stateside as he makes known his intention to stay in California post-war and pursue an education at the University of California at Berkely.

He would later move back to his native Terre Haute and father eight children and raise another from his wife’s first marriage.

George said his father was a strict man and one that always asked for the best from his children.

It wasn’t until later in life that George understood his father wasn’t trying to be overbearing or demanding, he was just trying to prepare his children for the world.

“In my 30s, I did a lot of self-help work and fully accepted my parents,” George said. “After reading these letters in my late 40s is when I fully respected them and [was] saddened that I never told them ‘Wow!’”

George knows how fortunate he and his siblings are that his grandparents saved each of Charles’ letters. From them they have an opportunity to see and understand their father in a way that many never get the chance.

“Sharing them now is an effort toward saying that,” George said. “I am thankful that they exist for enabling me to know my dad in a far deeper sense then even getting to know him in adulthood had he not died early.

“I hear his voice as he wrote each word. It’s as if I am there beside him or maybe even portraying him myself as my mind creates an image of the scene he writes about.”