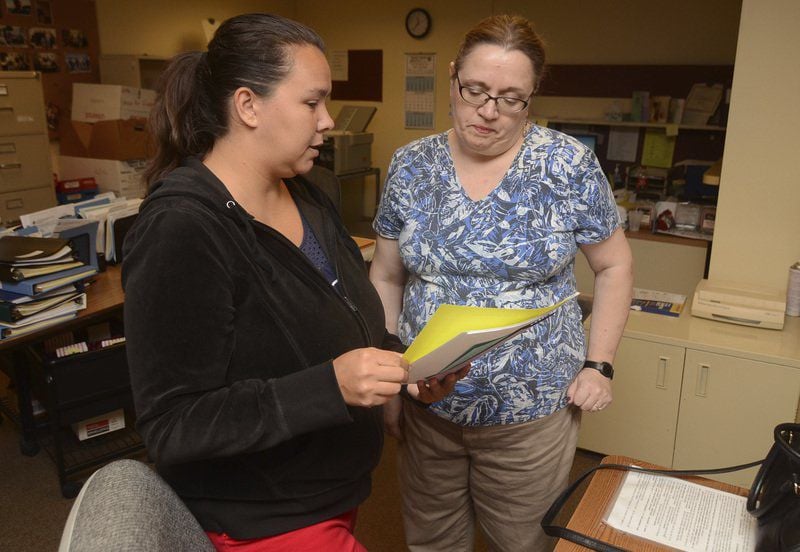 In the race: LaDonna Ingram, deputy clerk of the Absentee/Elections office, shows Vigo County School Board candidate Leah Myers a packet of material after Myers filed to run on Wednesday in the Vigo County Courthouse.Tribune-Star/Joseph C. Garza 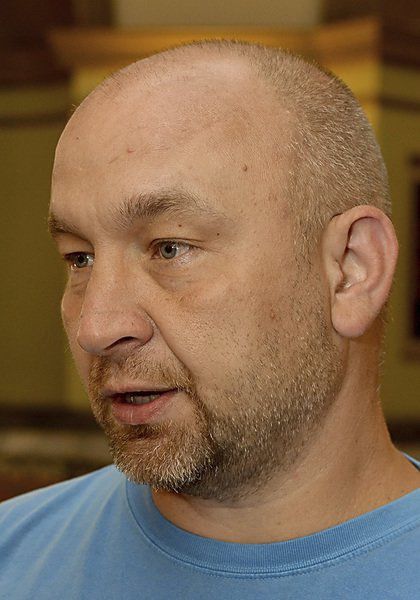 In the race: LaDonna Ingram, deputy clerk of the Absentee/Elections office, shows Vigo County School Board candidate Leah Myers a packet of material after Myers filed to run on Wednesday in the Vigo County Courthouse.Tribune-Star/Joseph C. Garza

Four people, including two incumbents, have filed for Vigo County School Board seats up for election in November.

The filing period started Wednesday and extends through noon Aug. 26.

Three of seven seats are up for election, two in District 1 as well as the District 3 seat; school board races are nonpartisan and school board members are elected at-large by voters throughout the county.

An issue that will undoubtedly emerge in the School Board races is the ongoing FBI investigation that began June 8, when agents executed search warrants at the VCSC administration building, general services facilities and information technology office. Items taken included financial records, computers, thumb drives and recordings.

Subsequently, the State Board of Accounts confirmed that it had received complaints about contracting procedures related to the school district. Little additional information has been made public about the probe.

The School Board has stated any comments related to the investigation will be through its attorneys.

Cunningham, 43, who is retired from the military, has previously run for various elective offices, including Terre Haute mayor, state representative and U.S. Congress. He is currently a Republican precinct committeeman, he said.

"I run for everything," he said, when asked why he is running. With the FBI probe, "I think it's a good time for people to run ...  I think there needs to be some changes."

School board members should act as a superintendent's "overseers," but in Vigo County, he suggested, "They sit back, and whatever he wants to do, they listen to. It's not supposed to work that way. And now we're in a mess where we don't know what the FBI probe is about ... We shouldn't bring that kind of stain to our county, let alone our School Board."

Lockhart, 68, is seeking his seventh non-consecutive term on the board, where he currently serves as president. He has served the past 12 years as a board member representing District 3. From 1983 to 1994, he represented District 1.

During his 24 years of service, he has been president for 15 years. A retired teacher and administrator in the Paris Union School District #95, he is currently a real estate broker.

In a statement, he said he is "extremely proud of the VCSC and the advancements that we have made during the past few years, both academically and financially. We have shown significant gains in test scores, graduation rates, and there have been many outstanding achievements by our students."

The district has done well in  maintaining and upgrading facilities while keeping a level tax rate with a healthy cash balance, he stated.

Looking to the future, he said funding will continue to be a challenge, and he is concerned about the teacher shortage.

Given the FBI probe under way, he was asked whether the board needs to make any changes going forward as far as how it deals with contracts and financial matters. "I think our procedures are under constant review and we adjust things all the time," he said. "I would expect that to continue in the future."

Lower, 70, is a retired Vigo County School Corp. teacher and dean and spent many years at Terre Haute North Vigo High School. She is seeking her third term, but she began serving on the board in 2005; the board nominated her to take the place of her late husband, Jack, who won election in 2004 but died the following year.

She is running because "I really do believe it's important to have a teacher on the board. I was a teacher 36 years" and she believes that education background provides an important perspective.

Her goals are to maintain the district's strong fiscal picture and she hopes to see changes as far as state testing "so teachers have more of chance to teach subject matter rather than having to completely focus time on preparing for testing."

As far as the FBI investigation, she said, "I think we need to see what it's all about before we start throwing stones and relying on gossip or hearsay or imagination of what could or might be."

She added, "I think it is important for the board to be diligent and follow through with maybe more of a watchdog stance than we have had."

Myers, 48, said she is running "so that people can have a voice on the school board. Many people feel they don't have a voice right now. I'm a parent [of a former VCSC student], I'm a taxpayer. I want to make sure I can represent everyone."

She is employed as an administrative assistant at Indiana State University's applied health sciences department and previously was executive director of the Ryves Neighborhood Association.  Several years ago, Myers was active in efforts to stop closure of Chauncey Rose Middle School.

Among her goals, she'd like to find a way for Vigo County to "get around the teaching to the test mentality and work on making sure our children are graduating with skills they will need to go out into the world and be successful," both in college and the workforce.

As far as the FBI investigation, she said if she's elected and there has been wrongdoing, "We'll find out who is responsible and we'll make sure it's taken care of."

But at the current time, she doesn't know that any specific actions can yet be taken. "We don't have all the facts in yet. I'd like to wait and see what the full investigation has to offer. I don't want to have an innocent person being accused," Myers said.