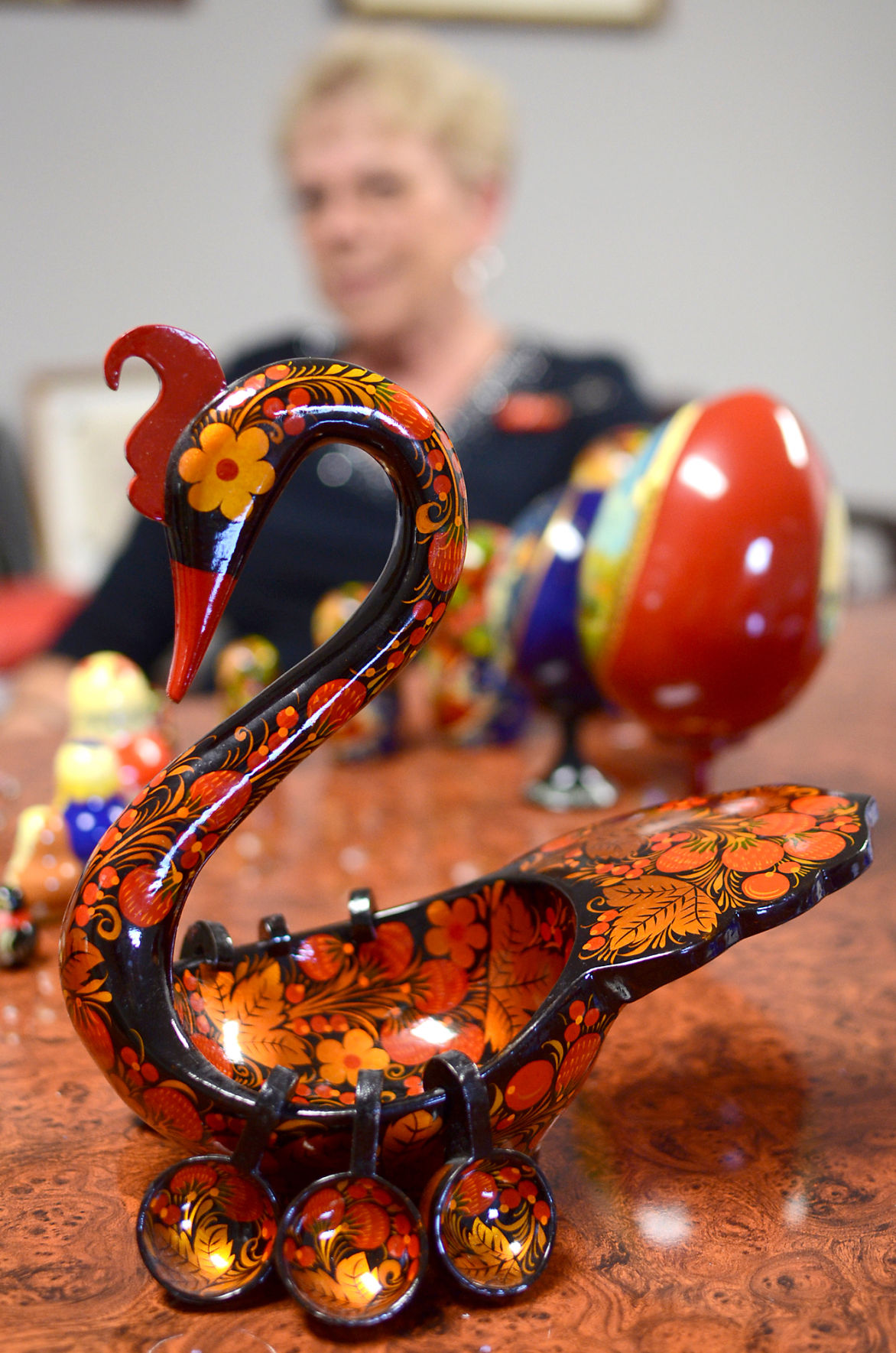 Tribune-Star/Joseph C. Garza A special gift: This ornate swan-shaped sculpture was presented to former Terre Haute Mayor Judy Anderson by the governor of the Tambov province in 2000. 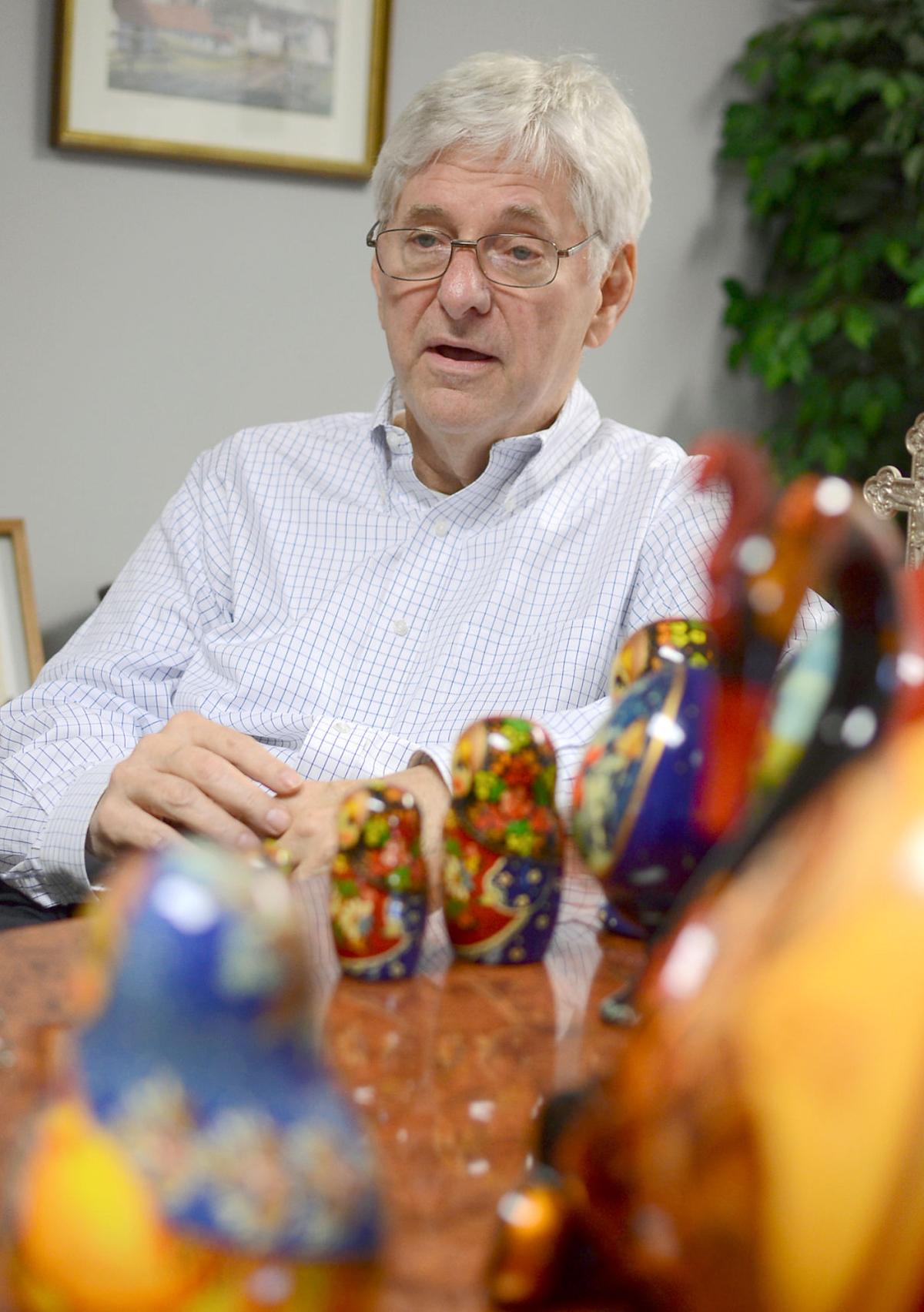 Tribune-Star/Joseph C. Garza A real eye opener: Joe Anderson recounts his trip to Tambov in 2000 with sister-in-law and then-Mayor Judy Anderson in his office on Friday. 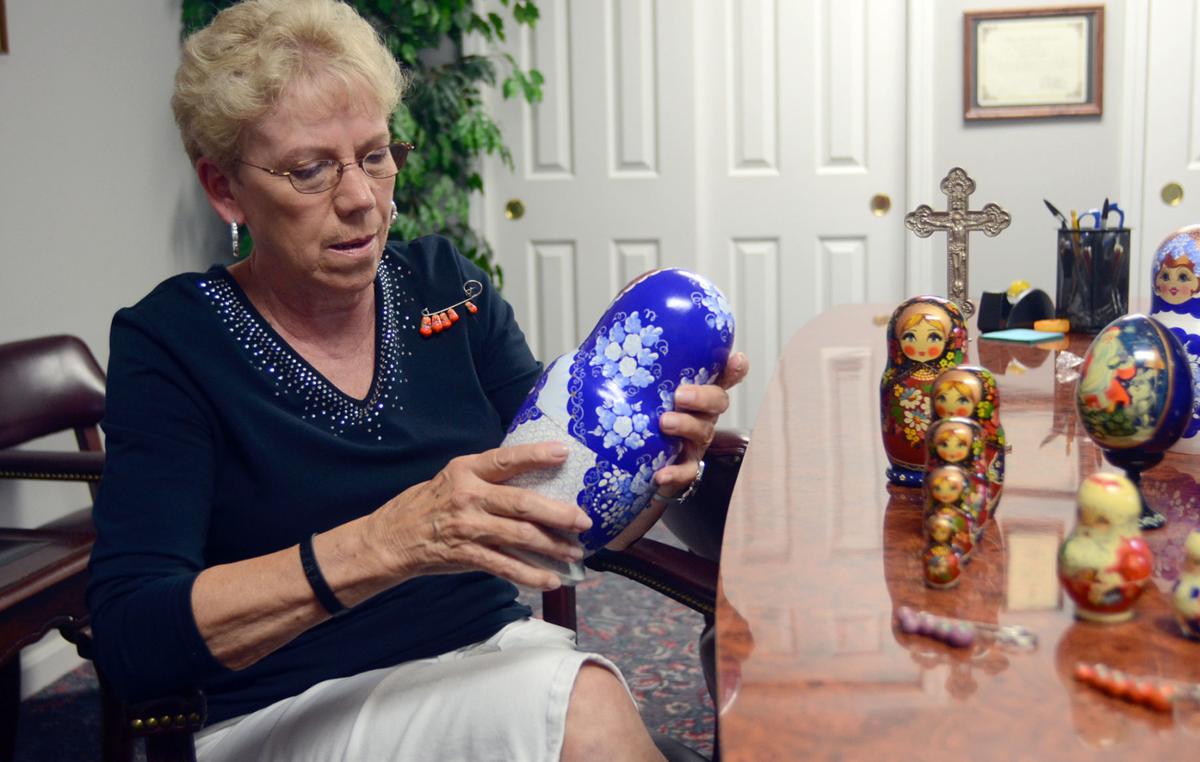 Tribune-Star/Joseph C. Garza A trip full of discovery: Former mayor Judy Anderson opens one of the Matryoshka dolls she bought in Tambov in 2000 on Friday at her brother-in-law Joe Anderson's office. 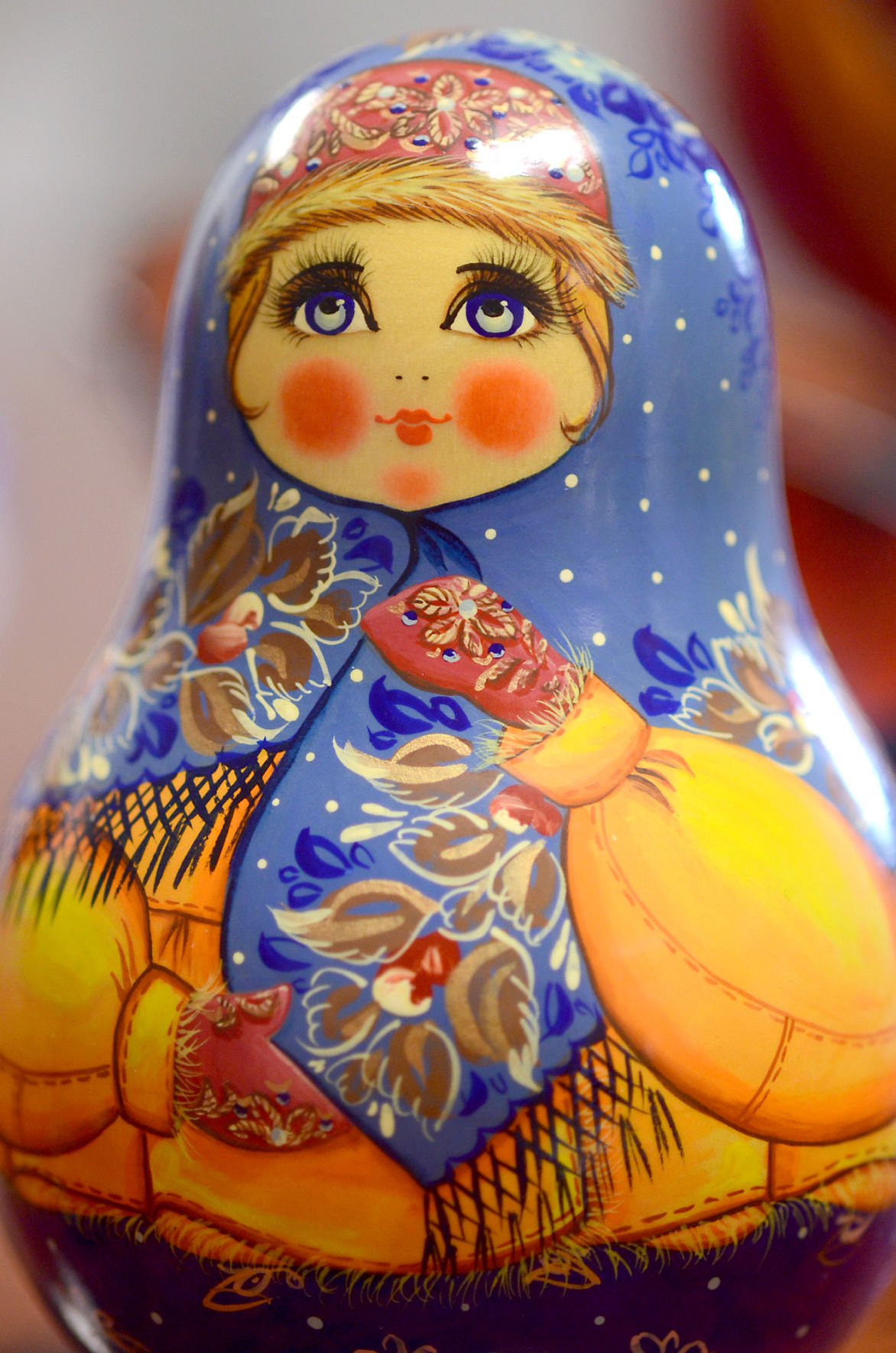 Tribune-Star/Joseph C. Garza Handmade from Tambov: A bell-shaped doll was one of the handmade items former mayor Judy Anderson bought on her trip to Tambov in 2000.

Tribune-Star/Joseph C. Garza A special gift: This ornate swan-shaped sculpture was presented to former Terre Haute Mayor Judy Anderson by the governor of the Tambov province in 2000.

Tribune-Star/Joseph C. Garza A real eye opener: Joe Anderson recounts his trip to Tambov in 2000 with sister-in-law and then-Mayor Judy Anderson in his office on Friday.

Tribune-Star/Joseph C. Garza A trip full of discovery: Former mayor Judy Anderson opens one of the Matryoshka dolls she bought in Tambov in 2000 on Friday at her brother-in-law Joe Anderson's office.

Tribune-Star/Joseph C. Garza Handmade from Tambov: A bell-shaped doll was one of the handmade items former mayor Judy Anderson bought on her trip to Tambov in 2000.

Judy Anderson, who took a goodwill trip to the Russian city of Tambov in early 2001, told the Tribune-Star that she cherishes the positive relationship developed with the people of that university city. The sisterhood developed out of a student exchange program between Indiana State University and Tambov University.

“I would never, ever think about taking that sisterhood away,” Anderson on Friday, when contacted about a MoveOn.org petition drive that urges American hometowns to sever “sister city” status with Russian cities over legally sanctioned discrimination against LGBT people.

In petitions and cities across America, thousands of MoveOn members are declaring, “We value and cherish our lesbian, gay, bisexual, and transgender residents and will not tolerate discrimination against our LGBT brothers and sisters by a ‘sister city,’” according to a MoveOn news release.

Anderson said she was unsure that any official action was ever taken to establish the “sister city” relationship, and current Terre Haute Mayor Duke Bennett confirmed Friday that no record has been found of any resolution or executive order on a sister city status with Tambov.

Terre Haute reportedly became a sister city of Tambov in 2002 after visits by Russian officials to Indiana, and after Mayor Anderson and others in local government participated in an ISU trip to the city of about 400,000 people located about 300 miles southeast of Moscow.

“It was just a beautiful bond of people,” Anderson said of the visitor exchanges, affirming that people are people no matter where they live. “They had the same concerns we had — low unemployment, alcoholism, unwed mothers.”

But they also had a drastic food shortage, she said, and many people lacked what most Americans consider basic daily necessities — such as toilet paper.

“It was one of the most humbling and wonderful experiences I’ve ever had in my entire life,” she said.

Recently, MoveOn members in 27 cities across the country launched campaigns to persuade their hometowns to sever sister city relationships with cities in Russia in response to the country’s new anti-gay laws and a rising tide of government-sanctioned violence and discrimination against LGBT people.

The petitions also claim to be a reaction to the announcement by Russia’s Minister of Sports, Vitaly Mutko, that athletes and visitors to this winter’s Sochi Olympics will be arrested if they say, or do, anything perceived as pro-gay under Russia’s ban on “gay propaganda.” That law may make it a crime for any parent to tell their child that being gay is okay or for health officials to distribute information regarding safe sex between same-sex partners.

Mayor Bennett said that he was made aware of the petition drive on Friday, and that the city legal department has been looking into the “sister city” status but has found no record of it. He said he plans to leave any action on the petition issue up to the city council

Local attorney Joe Anderson, brother-in-law of the former mayor, also went on the goodwill trip to Russia in 2001 and said that severing any sister city ties — official or not — would be an insult to the hospitable people of Tambov, who are not the people who instituted the ban.

“I think that if [Russian prime minister Vladimir] Putin says that he guarantees that no one will be touched, I think that would be appropriate to guarantee the safety of gay people,” Anderson said. “He rules with an iron fist.”

Joe Anderson also recalled many moments from the trip to Russia. But one memory that stands out is when a young Russian woman presented him with her grandfather’s medal for bravery and honor in what the Russians call “The Great Patriotic War.”

That war occurred as part of World War II between the Soviet Union and Nazi Germany. Anderson said that at one dinner, he thanked the Russian hosts for their country’s contributions to the Allied efforts against Nazi Germany. The Soviet Union lost an estimated 10 to 30 million people in the war -- the most of any nation involved in the conflict.

“I told them that if it hadn’t been for the Russians fighting Hitler on the Eastern Front, we might not have defeated Hitler,” Anderson said. “They appreciated that.”

Judy Anderson said that in the years since that trip to Russia, she has received Christmas cards and small gifts from Tambov. She has several Matryoshka — colorfully painted dolls that nest inside each other — and other Russian-made items purchased on that trip.

Since the people of Tambov still feel a connection to Terre Haute, she said, she would find it hard to endorse any end to the “sister city” status.