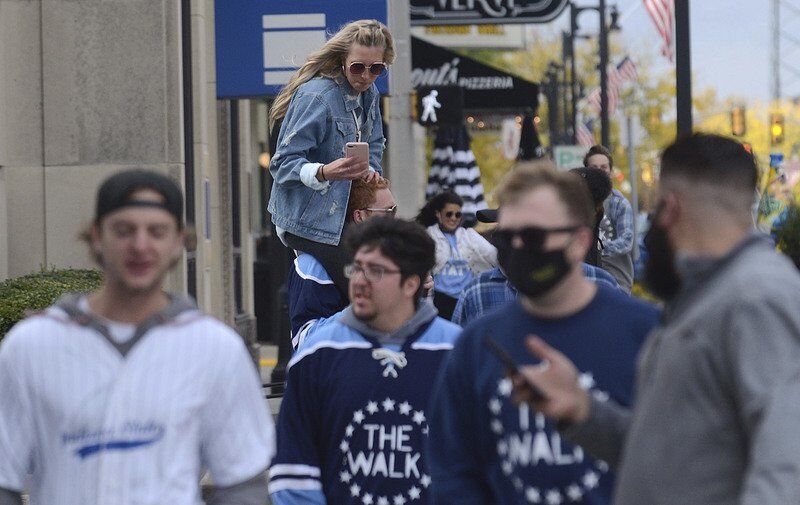 The unofficial Walk: Indiana State University alumna Raegan Walther of DeMotte, Indiana, checks her phone as she rides on the shoulders of senior Davis Cunningham of Indianapolis on Saturday on Wabash Avenue. 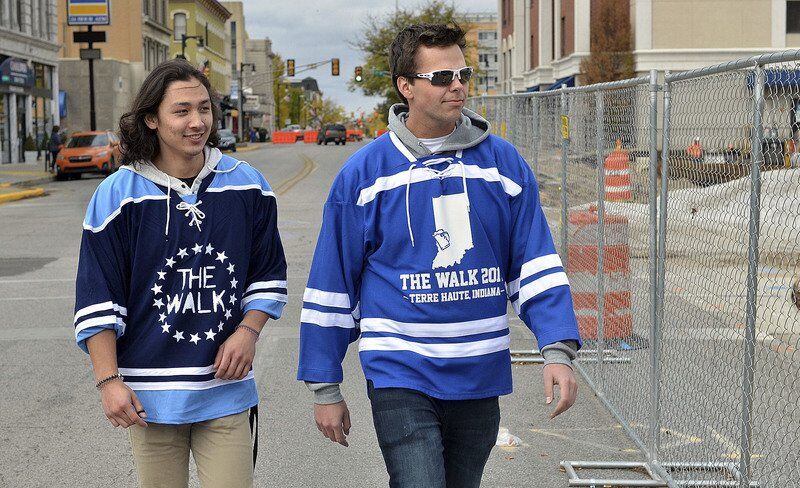 It's the one time of the year they come back: Indiana State University alumnus Zackary Albee, right, walks with a friend to the Copper Bar on Saturday along Wabash Avenue. 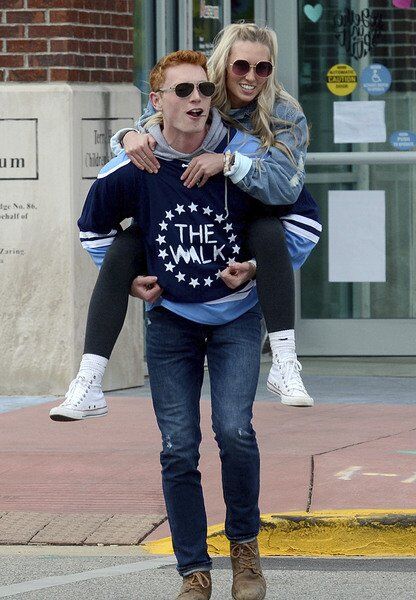 The unofficial Walk: Indiana State University alumna Raegan Walther of DeMotte, Indiana, rides on the shoulders of senior Davis Cunningham of Indianapolis as they catch up with a small group of friends on Saturday on Wabash Avenue.

The unofficial Walk: Indiana State University alumna Raegan Walther of DeMotte, Indiana, checks her phone as she rides on the shoulders of senior Davis Cunningham of Indianapolis on Saturday on Wabash Avenue.

It's the one time of the year they come back: Indiana State University alumnus Zackary Albee, right, walks with a friend to the Copper Bar on Saturday along Wabash Avenue.

The Walk this year wasn't the typical scene, a diaspora of hundreds of drunk college students filling area bars and spilling into the streets of downtown Terre Haute as they pub-crawl their way to the Indiana State University homecoming game.

In the year of COVID, it instead featured a few bars catering to sporadic groups of ISU students and alumni in search of libations and a sense of normalcy, bucking the advice of local, state and federal health officials all the while.

Masks were few among those who "walked" Saturday and instances of social distancing were fewer, an unsettling scene for those concerned about the current surge of cases in Vigo County and around the state.

What would normally precede the homecoming game at Memorial Stadium, The Walk went on Saturday despite there not being an ISU fall football season and all other official homecoming activities being canceled.

Davis Cunningham, a senior ISU student from Indianapolis, said despite all those homecoming activities having been canceled, he wanted to still do the walk and have something of a normal experience.

"When I started college I saw everyone do The Walk and saw it as part of the college experience here," Cunningham said. "I get times are tough, COVID has stuff shut down, but we're trying to still make the most of it."

Cunningham walked up and down Wabash Avenue with a group of friends, most of whom said they had recovered from COVID-19 earlier this semester.

Cunningham said his case was mild and resulted only in the loss of taste and smell.

Another student, who preferred not to be named so as to not be subject to potential repercussions, said those like herself and Cunningham have an immunity to the virus and are perfectly safe to be bar hopping.

"I know it seems like we're all being reckless," the student said. "But we've all had it, we quarantined together and they say it gives us three to six months of immunity."

Both the Centers for Disease Control and Prevention and the World Health Organization have said much is still to be learned about the antibodies produced when infected with COVID-19 and for how long they might offer protection from a subsequent infection.

One of the chief concerns voiced before Saturday cited the chance for community spread during the walk and Vigo County already being on the verge of becoming "red" in the state's COVID-19 ranking system.

2020 alumnus Zackary Albee said homecoming is one of the few times alumni come back to visit and that The Walk is tradition for both current and former students.

Albee said despite the virus making things different this year, he and others wanted to still find a way to have a good time.

"You have to make due with what you have," Albee said. "Not everyone is going to be open, but the one's that are we'll visit."

Albee said virus transmission is a concern, "but we do what we can."