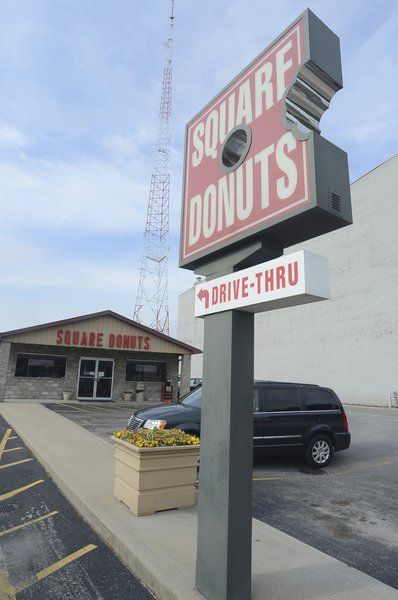 Tribune-Star/Jim AvelisCarrying on: Richard Comer Sr., founder of Square Donuts, passed away earlier this week. The latest edition of the business is on Wabash Avenue and run by his son Rick. 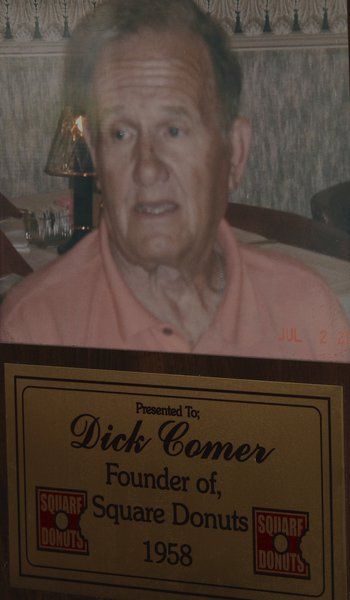 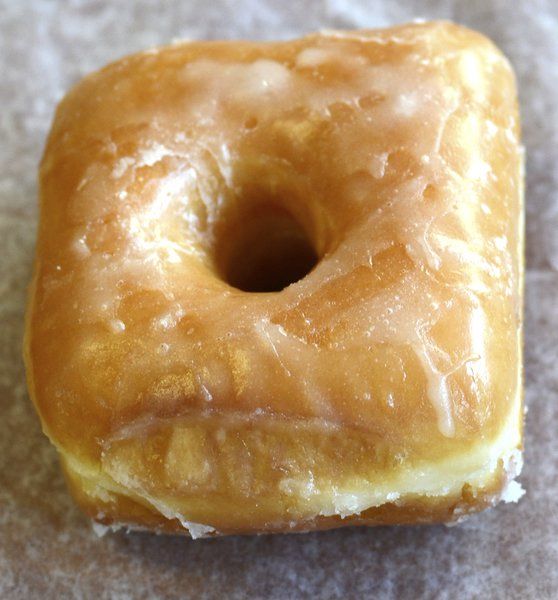 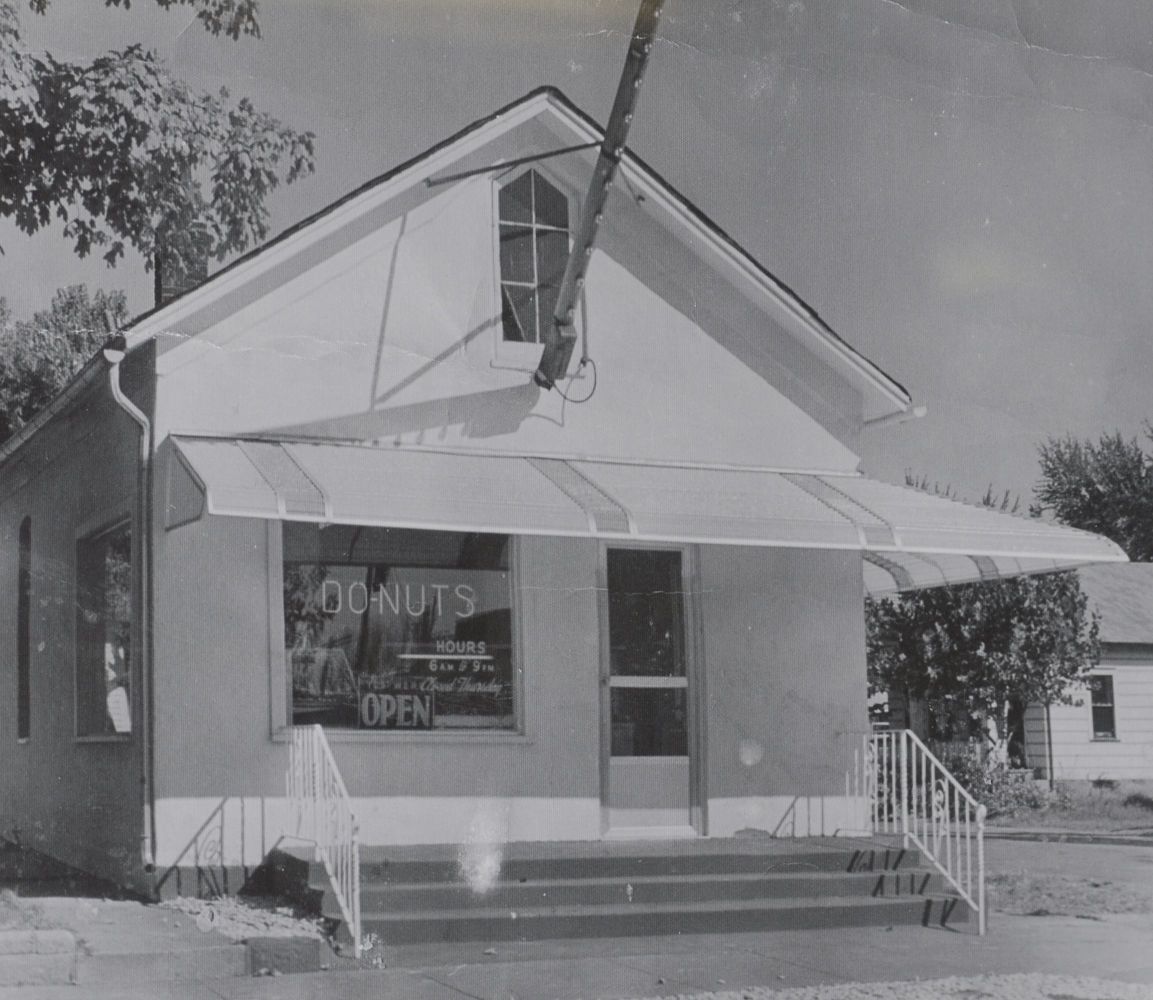 Old shop: This photo of the old Square Donuts shop on South Third Street hangs in the dining area of the latest shop on Wabash Avenue. Richard Comer Sr., the founder, passed away earlier this week.Tribune-Star/Jim Avelis

Tribune-Star/Jim AvelisCarrying on: Richard Comer Sr., founder of Square Donuts, passed away earlier this week. The latest edition of the business is on Wabash Avenue and run by his son Rick.

Old shop: This photo of the old Square Donuts shop on South Third Street hangs in the dining area of the latest shop on Wabash Avenue. Richard Comer Sr., the founder, passed away earlier this week.Tribune-Star/Jim Avelis

Many people in Terre Haute remember Richard Comer Sr. as the man who created a local icon — Square Donuts.

Comer built the business from a small venture originally known as Tasty Creme Donut Shop on South Third Street into a three-location venture that has now been franchised in Bloomington, Indianapolis and Richmond. Square Donuts has been listed as one of “Terre Haute’s Top 40” unique distinctions, and is regularly selected each year by Tribune-Star Readers’ Choice as the Best Donut Shop.

Richard Comer Sr. died Monday at his residence. He was 80. Services are being conducted this morning at St. Benedict Catholic Church, where Comer regularly served as an usher for several years.

His daughter, Darla Layton, told the Tribune-Star on Friday that her father was a hard-working man who loved his family, his church and football.

A graduate of Indiana State Teachers College, Comer came to Terre Haute from his hometown of Lafayette to play football for the Sycamores.

He was drafted by the Chicago Bears, but, after graduation instead went to California to fulfill his military commitment. Two years later, he returned to Terre Haute and settled down with wife, Patricia, in her hometown, and went to work in his mother-in-law’s donut business.

“My dad was the type who would much rather work for himself,” Layton said, explaining why he never went into teaching. “He could set his own rules, set his own hours. When I was a kid, he went in at 3 a.m. to get started, but then he started going in at midnight because the shop was so busy.”

Layton said the first family doughnut shop was located on South Third Street. It was known as Tasty Creme then, and it kept that name as it expanded to another location in the 2000 block of Wabash Avenue. In 1967, Comer added the innovation of making the donuts using a square cutter. A 1969 city directory has a listing for two Tasty Creme Donut Shops, with the slogan “Don’t Be a Square, Try Our Square Donuts.” Eventually, a third shop would be opened on Fort Harrison Road on the city’s north side. The original Third Street location closed a few years ago.

Layton said her father worked primarily at the South Third Street location — making the dough, baking the donuts and handling the ordering of supplies and the finances. He and Patricia had four daughters, Debbie, Deanne, Darla and Deninne, and son Rick Jr., who now owns and runs the family business. Layton said she and her sisters and brother all worked in the business during the summer and on weekends. She worked the front counterand filled and iced donuts.

“I didn’t have a lot of contact with Dad,” Layton said. “He was always in back taking care of what needed to be done. He did everything old school. Not by computer.”

When the Wabash Avenue shop moved to the 900 block, that is when the name changed to Square Donuts, Layton said.

Layton said that employees of Square Donuts tended to stay a long time with the business because of the family atmosphere. The walls of the Wabash Street shop display many photos that include customers and employees, and there are employee awards recognizing faithful years of service. That is a testimony to her father — his fairness and work ethic.

”Many of the employees stay forever,” she said. “They are very loyal.”

Making donuts takes a lot of time, she said, and the Sunday morning church orders grew exponentially over the years. The square glazed donuts are the most popular, she said.

When Comer wasn’t at the donut shop, or spending time with his family, he could be found bowling, or working as an assistant football coach at Rose-Hulman Institute of Technology.

“He was a good enough bowler that he could have gone pro,” Layton said, “but football was his passion.”

He was a part-time coach for several years at RHIT, working with the offensive line.

He and Patricia were also dedicated to service at St. Benedict’s Catholic Church in Terre Haute.

“He volunteered for years as a greeter at the 11 o’clock mass,” said pastoral associate Sue Butwin. “When you walked in and Dick Comer was there, you were happy. It was so good to see him. He was a great presence.”

Bob Burns is one of the regular customers at the Wabash Avenue shop, coming in since he retired from teaching at West Vigo Middle School in 1993. At one time, 15 of his buddies gathered there daily to eat donuts and visit. There are now only three of them left, but they are loyal to the shop.

“Everybody here is so nice, and they treat you pretty well,” said Burns, who noted that his favorite pastry is a chocolate-covered long john.

Karen Harris and her husband, Danny, are also regulars.

“You can’t get better donuts. It’s the best place to sit and visit. The Tribune-Star told us that,” she said, referring to the multiple Readers’ Choice awards on the wall.

That is the way Richard Comer Sr. would want it.