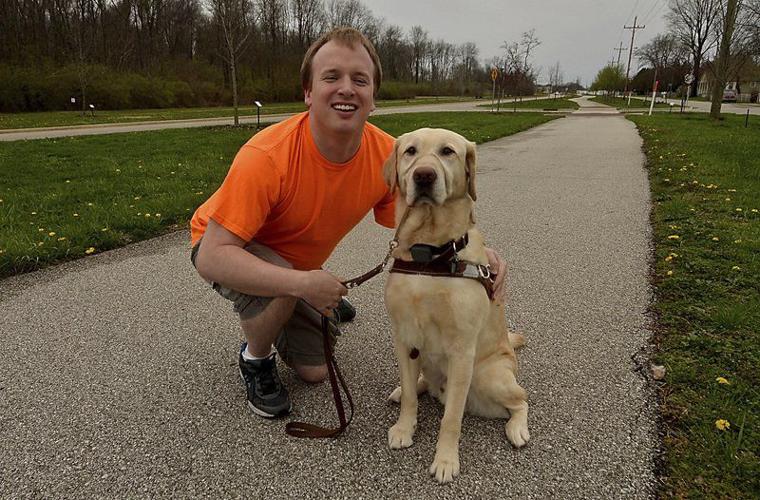 Tribune-Star/Joseph C. GarzaMiddleton’s rules: Jared Price, a WILL Center employee who is legally blind, wants the public to understand that using a service dog like Middleton requires certain rules such as not petting Middleton when he is wearing his harness. Here, the two pose for a photo during a walk along Brown Avenue on Saturday. 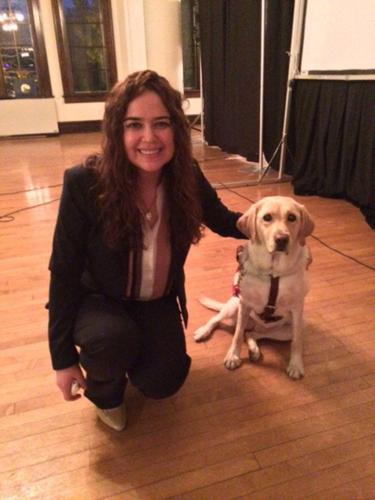 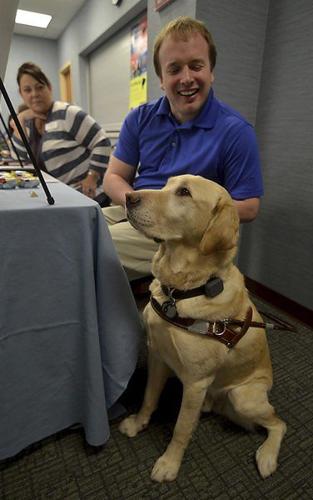 Tribune-Star/Joseph C. Garza Shining the light of awareness: WILL Center employee Jared Price and his service dog, Middleton, sit at the center's booth together on Friday in the basement of Union Hospital during the hospital's Diversity Fair. 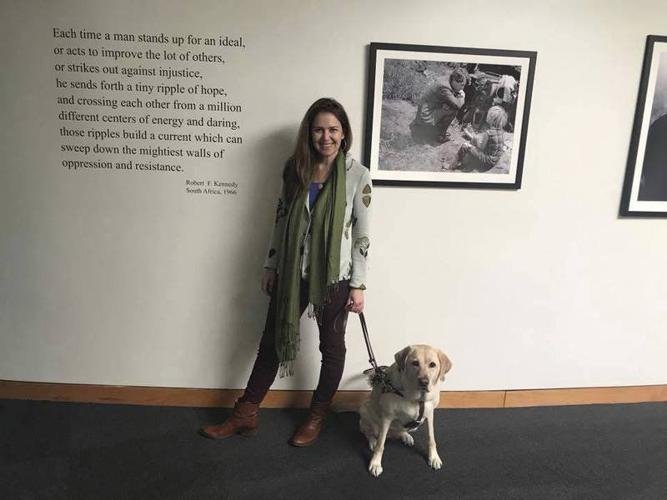 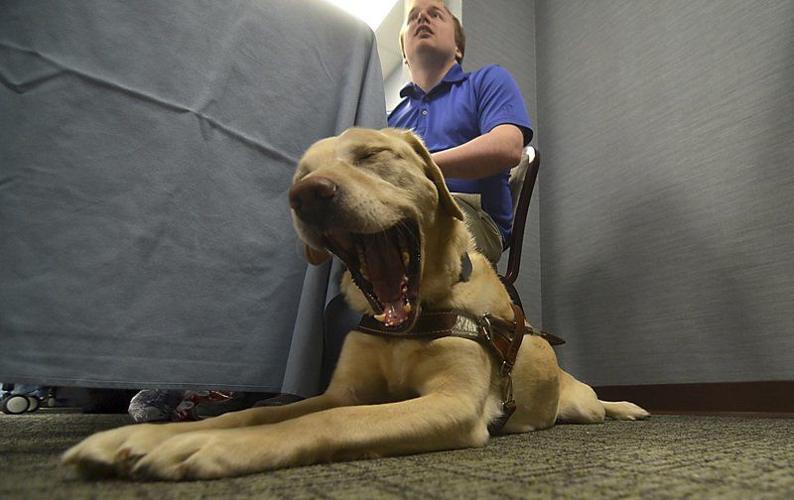 Tribune-Star/Joseph C. GarzaHe works his tail off: Middleton, the service dog of Jared Price, a WILL Center employee, yawns as he rests at Price’s feet on Friday at Union Hospital.

For Kristin Fleschner, her guide dog, Zoe, serves as her “eyes” in safely guiding her wherever she needs to go.

Fleschner, an attorney and Vigo County native, is blind, and Zoe is her “seeing-eye” dog. Zoe has spent thousands of hours in training at a cost of more than $60,000.

Together for 5 1/2 years, they have traveled across the country and internationally; Kristin and Zoe have been on more than 600 flights together.

Zoe is not a pet. “She is my eyes,” Fleschner said.

But traveling, and even day-to-day shopping trips, have become increasingly difficult because of increasing numbers of fake service dogs and fake emotional support animals, particularly in air travel, she said.

Service dogs and emotional support animals  are not the same under the Americans with Disabilities Act.

Under the ADA, a service animal is a dog (or, oddly enough, a miniature horse) that has been individually trained to perform tasks or do work for the benefit of a person with a disability.

Under ADA, state and local governments, businesses, and nonprofit organizations that serve the public generally must allow service animals to accompany people with disabilities in all areas of the facility where the public is normally allowed to go.

Dogs or other animals that provide companionship, comfort, or relieve anxiety or phobias — but are not trained for an individual’s specific disability — are not considered “service animals” under the ADA and don’t receive the same protections under ADA.

Pete Ciancone, executive director of the WILL Center in Terre Haute, said use of emotional support, or comfort, animals has become a “gray area” and some people have abused it, causing problems for those who use service animals to maintain community-based living.

There does seem to be some misunderstanding over the differences between a comfort animal and a service animal, he said.

Under ADA, service animals might be trained as guide animals for the visually impaired; they may assist with mobility challenges, significant hearing loss or to provide seizure alerts.

A psychiatric service dog is one trained to perform tasks that assist individuals with disabilities to detect the  onset of psychiatric episodes and lessen their effects.

“I don’t deny the importance of comfort animals,” Ciancone said, but they are not trained in the way that is required under ADA. Some people “want to extend comfort into the service realm, and it’s not the same thing.”

To complicate matters, the  Air Carrier Access Act (ACAA) — which covers air travel — is broader than ADA and it allows passengers to bring emotional support pets into the airplane cabin for free, as long as they have documentation from a licensed mental health professional.

Abuse of the law and an increase in adverse incidents has caused airlines to review their policies on emotional support animals. The problem drew widespread attention in January when a woman showed up at a United Airlines counter at the Newark, New Jersey Airport and wanted to take her peacock on a flight to Los Angeles.

Incidents involving air travel have brought the issues to the forefront, said Fleschner, 36, who lives and works in Washington, D.C.

Emotional support animals don’t have to have specific training, and “a lot of people have felt entitled to bring animals onto the plane that were just pets,” Fleschner said.

She’s experienced the problem first-hand and describes incidents on an airplane where she was nipped on the ankle by another dog and Zoe was barked at.

That abuse — taking fake service animals or emotional support animals on airplanes — led to the tightening of regulations by Delta that would have adversely impacted even those with ADA-defined service dogs, including Fleschner. When activists complained to the federal Department of Transportation, concerns of those with service dogs were mostly resolved, she said.

“However, the ACAA needs to be re-examined, because the definitions of service animal and support animal allows for abuse,” she said.

Problems are not limited to air travel.

Because of misuse of these animals, those who have legitimate service dogs are having problems with access in other ways; Fleschner and Zoe have frequently been denied service by Uber drivers, which is illegal. She’s also encountered problems with ride shares and taxis.

She also regularly finds that animals, particularly dogs, are allowed into businesses such as groceries and drug stores, that are poorly behaved and should not be there.

“They bark, growl and lunge at Zoe,” she said. But if she approaches management, the owners or managers may be reluctant to act; they may be confused about the law or fear lawsuits.

Animals, even service animals under ADA, can be legally asked to leave if they are not behaving. “Dogs aren’t allowed to bark and lunge in a store,” she said, noting that a trained service animal wouldn’t do that.

Misbehaving animals have a major impact on Fleschner’s day-to-day life, as she shops or tries to go from one place to another, including work. “It makes it incredibly difficult,” she said.

Fake service animals or emotional support animals, especially those poorly behaved, can cause danger to real service teams, she said.

“I have friends that have had to retire dogs because they have been attacked by other dogs in public places. For a guide dog owner, that is a life-altering incident,” she said.

“Eighty percent of service dog teams have had negative interference in their work and 44 percent have been attacked by another dog, according to a survey that the Seeing Eye conducted,” Fleschner said.

It is important for the public to realize that guide dogs are not like ordinary pets, she said. About $60,000 and thousands of hours are invested in the breeding, raising and training of guide dogs before they are matched with a blind person.

She understands that dogs may be at festivals or certain events and she looks for notices so she is prepared. “Even at these events, the public should know that when a dog is working it should never be approached by another dog or distracted by a human,” she said.

Jared Price, who works at the WILL Center and is legally blind, has had a service dog — Middleton — since December 2013.

Price also would like to increase awareness about service dogs. At the top of his list, he wants people to know that when a service dog is wearing its harness, it is working and cannot be petted. If people start touching and petting it, the dog can become distracted “and that could cause all kinds of issues,” including safety problems, he said.

Also, under ADA, only two questions can be asked of those with a service dog:  1) Is the dog a service animal required because of a disability? and 2) what work or task has the dog been trained to perform?

Price has witnessed some problems on air travel. He recalls an air flight with Middleton in which an emotional support dog barked the entire trip, but Middleton lay quietly, virtually unnoticed.  Middleton “behaved as a service dog should” and people were surprised to learn he was on the plane.

He believes greater awareness on the part of the public is key.

Leonard Sandler, a clinical law professor at the University of Iowa, said definitions differ not only with ADA and ACAA, but with the federal Fair Housing Act as well and state laws vary as well.

ADA is concerned with public access, while the Fair Housing Act provides for assistance animals in housing to accommodate someone with a disability. The laws provide reasonable accommodations for different purposes.

“What is suitable for a home ... is  completely different than someone who wants to go to a doctor’s office, library  or government office,” Sandler said.

Changes in federal law should be approached with caution, he suggests. “I’m reluctant to suggest amendments to ACAA, ADA or FHA without some really documented, terrific need,” he said. When people want to amend the law, they should be aware that others have concerns they may want addressed as well.

Over the last few years, I have received numerous constituent complaints regarding emotional support and service animal fraud. For example, airline passengers have tried to bring pets onto flights without paying fees, and tenants have taken advantage of apartment owners to get by no-pet policies.

Recently, in Indiana, an apartment owner told me a tenant brought two cats and 10 rats to their apartment complex, stating they were needed for emotional support.

To begin addressing this issue at the state level, I focused on emotional support animal fraud. During the 2018 session, I authored Senate Enrolled Act 240, which allows individuals offering to rent or make available a dwelling to those with emotional support animals to request written proof of their need for the animal from a health service provider if their disability is not apparent.

The bill also makes it a Class A infraction if an individual submits a request for an emotional support animal that falsely suggests they have a disability, entitling them to have the animal in a dwelling.

Sally Irvin, the founder and program director of the Indiana Canine Assistant Network, supported my legislation, saying it will help assure the welfare of the public, people with disabilities and even their animals are protected.

Gov. Eric Holcomb recently signed SEA 240 into law. While this bill is a step in the right direction, passing other legislation may be difficult because of federal regulation. However, I will continue to look into the issue to see what else can be done at the state level.”