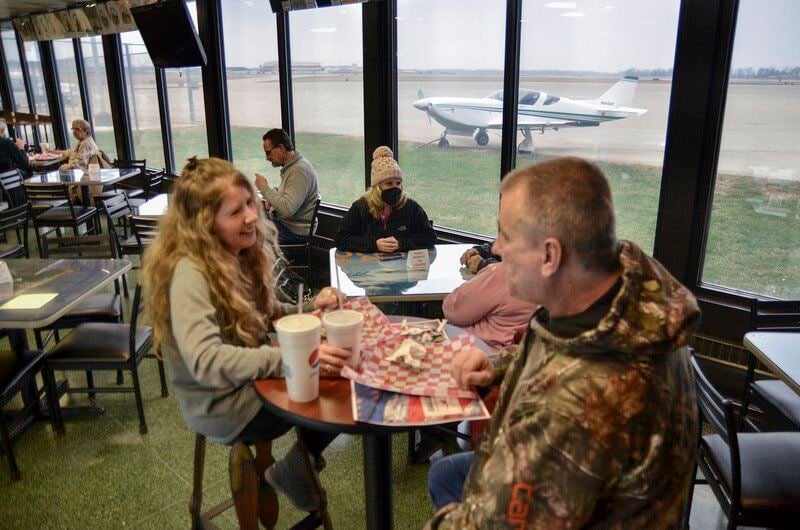 Tribune-Star/Austen Leake Unbeatable view: Customers at the Corsair Cafe get to enjoy the view of the Terre Haute Regional Airport runways while they enjoy the cafe’s food and drinks. 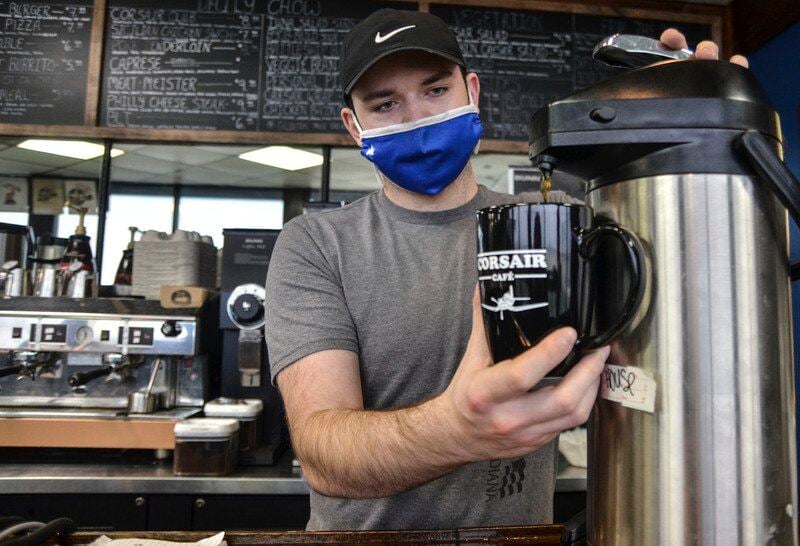 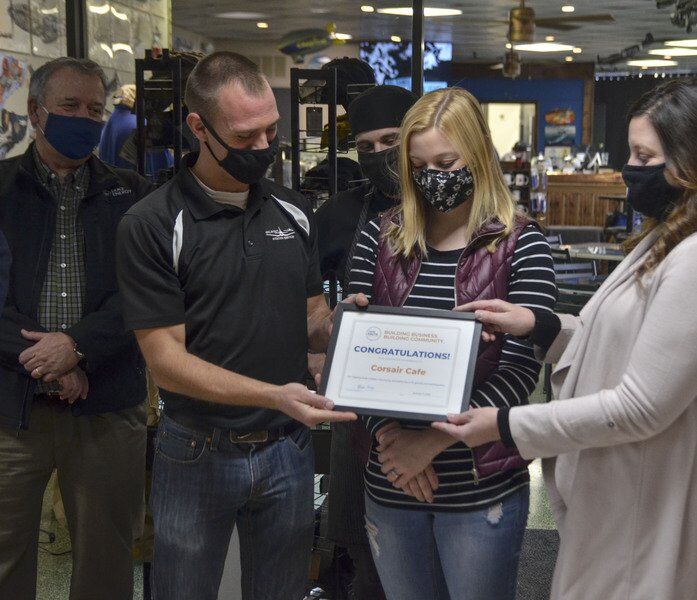 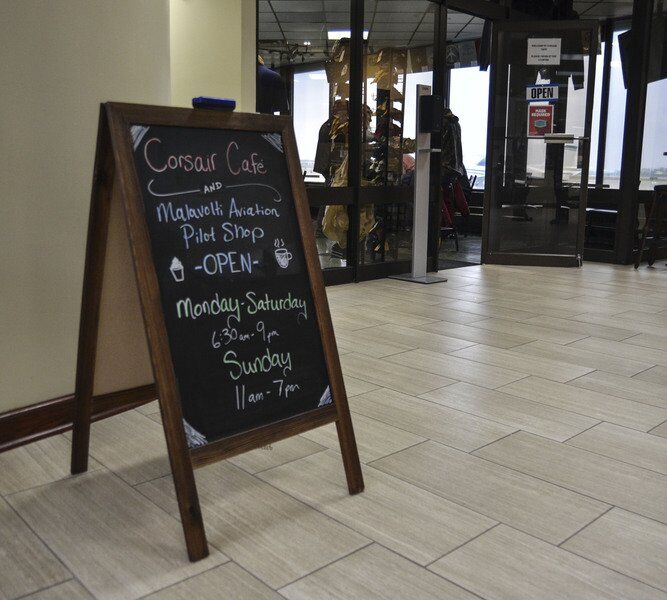 Tribune-Star/Austen Leake Open for business: Corsair Cafe at the Terre Haute Regional Airport has opened the doors and offers not only fresh food and coffee, but aviation supplies and memorabilia.

Bill and Kristie Megenhardt sat on chairs with propellers for legs as they gazed out onto the runways of Terre Haute Regional Airport on Monday.

It was their first visit to Corsair Cafe, which officially took off as a new airport restaurant, complete with a retail section for pilot supplies, plus coffee mugs, aircraft satchels and even model airplanes.

"This is our first time here for (Corsair Cafe), but I have two nephews who work here," Kristie said, referring to Chandler Ames, the chef for the cafe, and Zach Boggs, business manager for Malavolti Aviation Services, which owns the cafe.

Bill ordered a bacon cheeseburger and fries. "It tastes good and I like the atmosphere with all the planes because I was in the Air Force," he said, serving from 1979 to 1983. He is originally from Coal City in Owen County, before his family moved to Colorado. He has since returned to the Wabash Valley.

The airport granted a one-year lease for the new cafe in November. That lease can be extended up to four consecutive one-year terms.

"They did a soft opening on New Year's eve and it has been crowded," Airport Executive Director Jeff Hauser said of the new cafe.

"They moved some retail around and increased the restaurant area, so it has worked out well," Hauser said. "It is nice to see crowds in here again and is nice to have coffee here where I don't have to drive away to get it. I know it is new, but they have a different way of marketing with social media, and crowds have come," Hauser said.

Ethan Malavolti, who along with his wife Emily, own Malavolti Aviation Services, said the company sought to "try to get more visible and get into the terminal building. We decided to incorporate the coffee shop and cafe portion into it because I think it is a good mix. It is not something that you see all the time at airports. It is not just the community traffic, but the flying traffic that will come here," he said.

"I have a big network of people all over the United States. We already had people two or three states away say they will come fly over here to the get the $100 hamburger," Malavolti said. "The $100 hamburger is you pay more to bring your airplane over, and you spend more on gas, so they call it the $100 hamburger."

Additionally, if a larger space is need, the restaurant can use a nearby meeting room.

"Everyone is receiving this really well. There is also the personal pan pizza, which is seven inches, but loaded. All the sauces are made in house, from scratch," Ames said.

"We also hope to have a garden here in the summer for fresh items," Ames said. The restaurant also hopes to use an outdoor patio in the spring and summer months to host events.

Malavolti said he got the name for the cafe from his love for the Corsair, designed and operated as a carrier-based aircraft entering service in World War II and the Korean War.

"Growing up, it was my father's favorite airplane and I grew up watching "McHale's Navy" and "Baa Baa Black Sheep," so I got the bug for Corsairs at an early age," Malavolti said. Additionally, he pilots a B-25 Mitchell, a World War II bomber, and a T-6 Texan, a single-engine advanced trainer aircraft also flown during World War II, for a military museum based in Minnesota.

"I travel there to fly them and we do rides and fly all over the United States to do ride programs," he said.