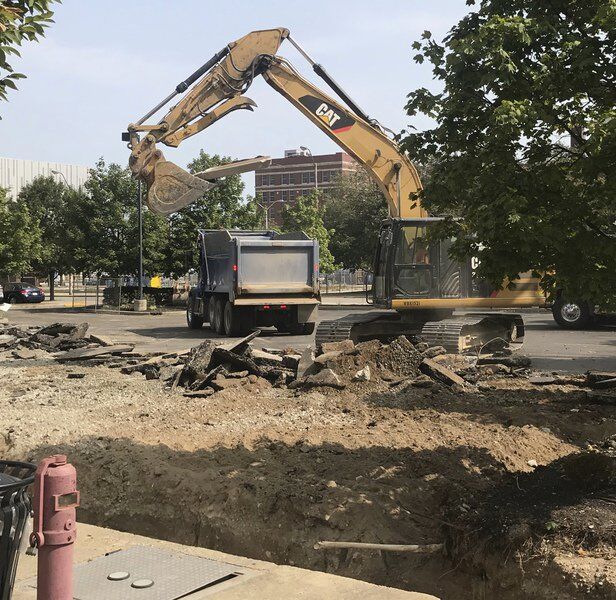 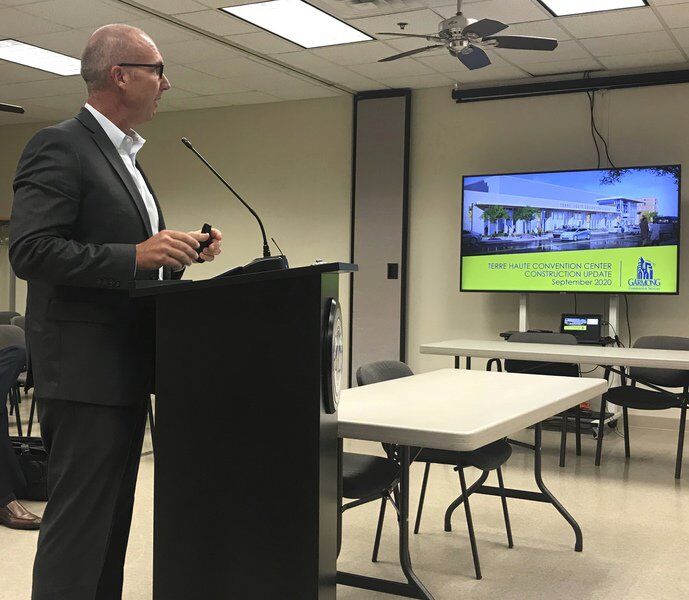 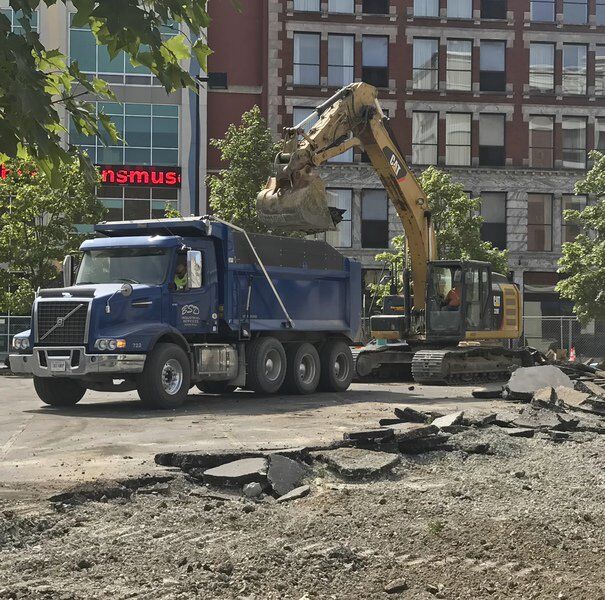 With all but one utility relocated, site demolition began today for the downtown Terre Haute Convention Center.

Heavy equipment moved onto property for demolition of the east lot of the Hilton Garden Inn to the Copper Bar.

"There is going to be an hour or two shut down of water service to the Hilton Garden Inn, which has been scheduled with their staff, to allow us to switch that water service over to the new pit," Brian Kooistra, chief operating officer for Garmong Construction, told members of the Vigo County Capital Improvement Board.

"You will see a couple of cranes in there with big auger drill bits that will drill down approximately 40 feet down into the ground," to place about 500 pilings, each about 16 inches in diameter filled with reinforced steel and concrete which will support the foundation of the convention center.

The switch over of electrical service from Duke Energy, planned for Sept. 22,  has been pushed back a week or more at the request of the Hilton Garden Inn, Kooistra said.

"That city block is currently fed by an underground electrical network," he told the board. "As part of this project, that entire block goes through a more updated electrical feed with pad-mounted transformers of which the infrastructure is in place. Duke Energy has been on site the last couple of weeks pulling wire and later this week will set transformers to allow a switchover to the Hilton Garden Inn," he said.

Eighth Street has been closed, but limited access is being maintained to a lot just south of the state office building at Eighth and Cherry Street to allow state workers access to parking, Kooistra said.

One remaining utility — Intelligent Fiber Network (IFN) — has not completed a relocation, Kooistra told the board. "They are partially complete with their work," he told the board, adding he hopes the utility can complete its work prior to the end of October.

"It is the lone utility relocation yet to be completed on the project. Right now it is not holding anything up, but as we get closer to late October or first of November, then the complications that will create to the schedule will become more apparent, but I am confident we can resolve it prior to that," Kooistra said.

Brian Bosma, attorney with Kroger Gardis & Regas, said access issues had delayed the property closings of two parcels needed for construction, but "lawyers and owners of the property have determined to move forward and work out a couple of these issues after the fact, as they will require some additional survey work," Bosma told the board.

"We will be closing on both properties this week," Bosma said. Access issues are re-establishing an easement between the convention center and The Copper Bar for a portion of the property for access and outside dining. "We have committed to making that happen," Bosma told the board.

Another access issue to be resolved is a current easement to exit to the west to Seventh Street goes through "an old alley and not through the existing alley way, which is critical ingress and egress for our purposes, where most of the convention center deliveries will be made," Bosma said, which is also expected to be resolved.

"After a year and a half of discussion and pushing, looks like this is the week" for all property closings, Bosma told the board.

Bosma told the board a final management agreement with Global Spectrum LP, doing business as Spectra Venue, to serve as the managing agency for the new convention center will be addressed after property closings this week.