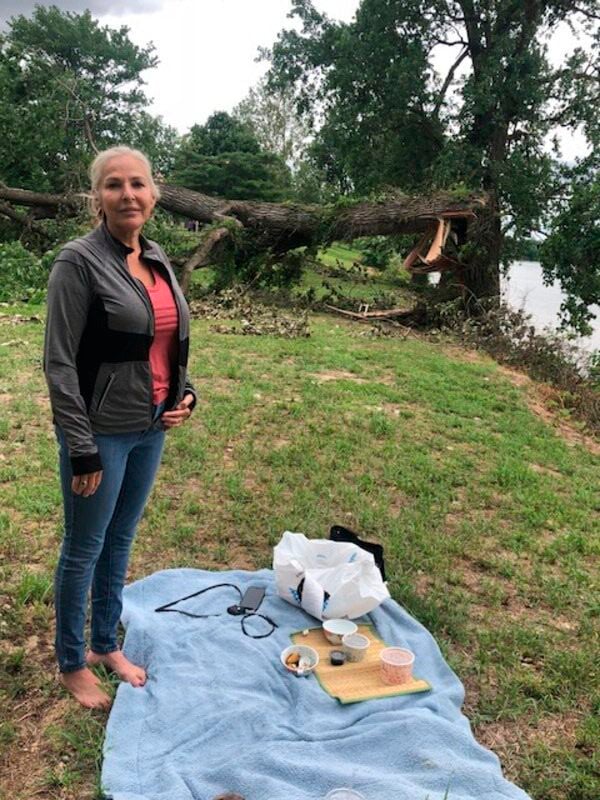 Tribune-Star/Sue LoughlinDonna Selman, an Indiana State University professor of criminology, often has lunch at Fairbanks Park, but on Monday, she wasn't prepared for the tree damage she saw — caused by Saturday's storm. She had her picnic lunch between two large cottonwoods destroyed by the storm. 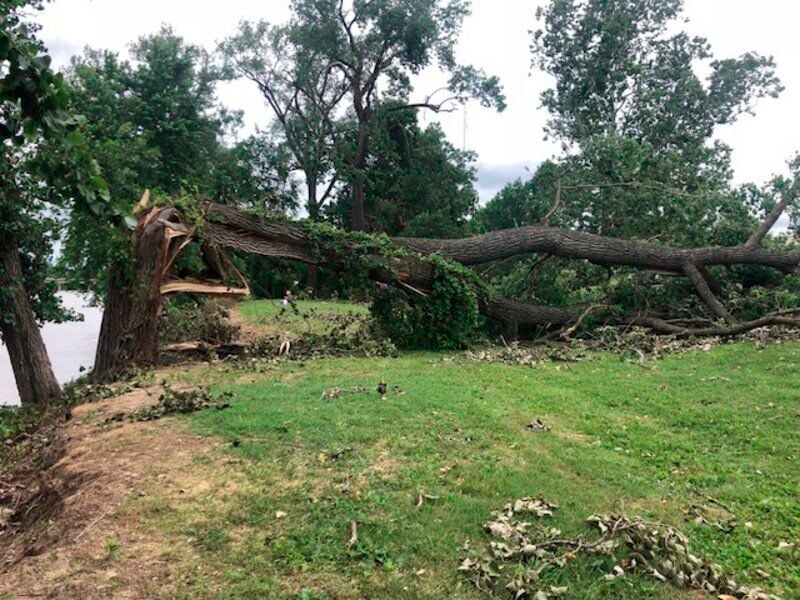 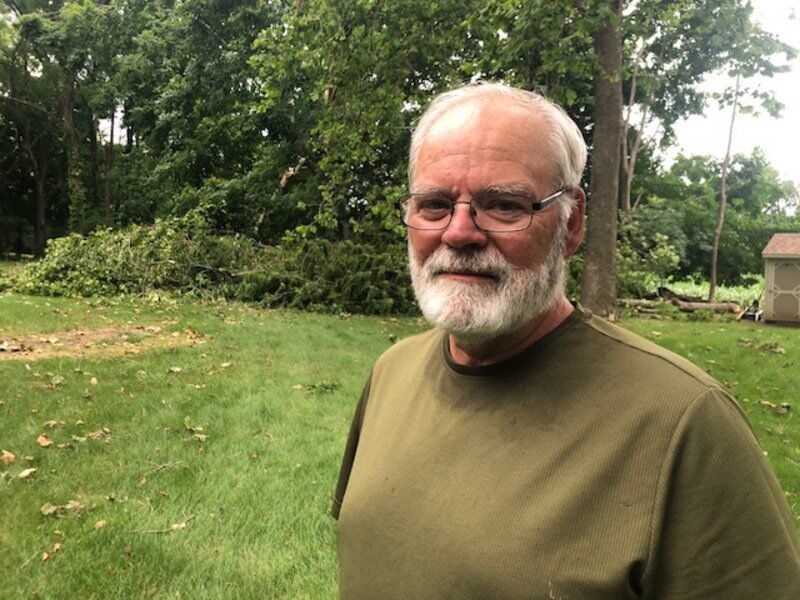 Dennis Moody, who lives in Stratford Hills subdivision off Margaret Avenue, said the subdivision "got hit pretty hard" by Saturday's storm, with several homes damaged by fallen trees or limbs. 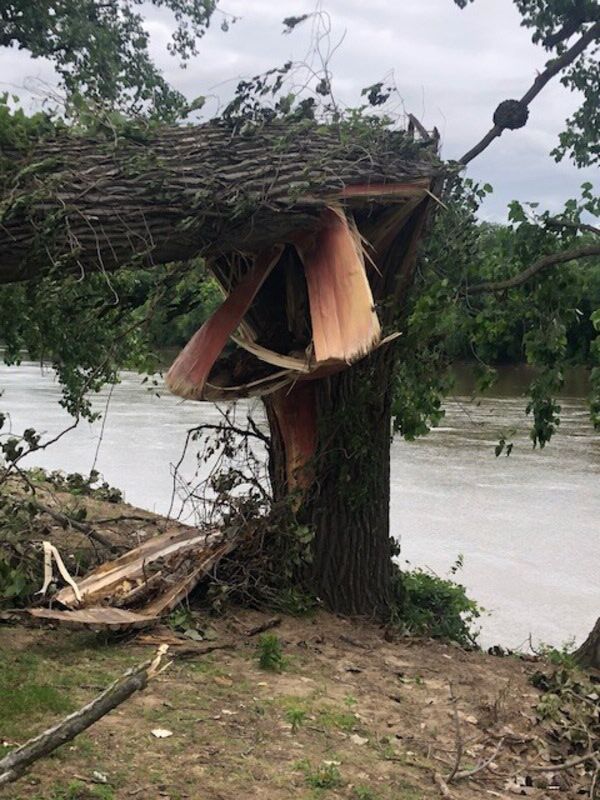 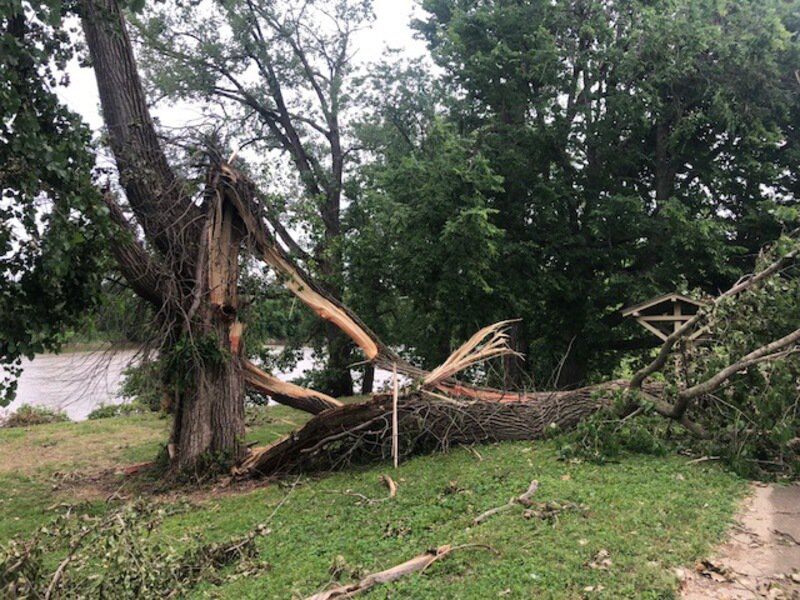 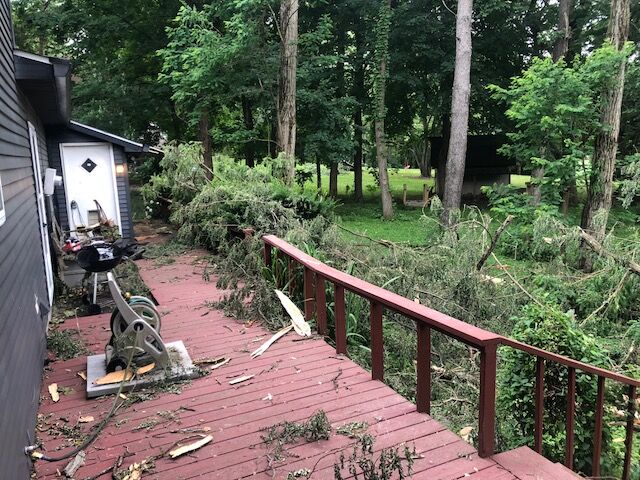 Tribune-Star/Sue LoughlinDonna Selman, an Indiana State University professor of criminology, often has lunch at Fairbanks Park, but on Monday, she wasn't prepared for the tree damage she saw — caused by Saturday's storm. She had her picnic lunch between two large cottonwoods destroyed by the storm.

Stefanie Pichonnat and her daughter had been asleep in their Stratford Hills home in Terre Haute about 5:30 a.m. Saturday when the house shook and there was a huge crash.

"We weren't sure if lightning hit our house, or trees," she said Monday.

Their home had damage from three different trees, and Pichonnat anticipates they'll be getting a new roof and other repairs as a result.

The home was one of several in Stratford Hills damaged by fallen trees and limbs during Saturday's early morning storm, and for many, cleanup continued Monday.

The subdivision "got hit pretty hard," said Dennis Moody, Pichonnat's neighbor, who enlisted the help of several grandchildren as they removed limbs and branches from his front yard Monday afternoon.

Nearby, a tree still could be seen on top of one of the residences.

Residents impacted by the severe storms June 18-21 are asked to contact Indiana 211 to report storm damage and help with a statewide damage assessment.

In addition to its own crews, the utility brought in an additional 100 people using outside contractors — primarily line workers — who came from throughout Indiana. "We called out an army. We take it seriously to try to get people's power back on as quickly as we can — the key is as safely as we can, too," Burger said.

There were many downed power lines, and people should always assume a downed line is energized, he said. In addition, "We saw a lot of trees down on buildings or structures."

While power was restored late Sunday night, additional outages may happen later as loose limbs and branches fall "and maybe tear a wire down," Burger said.

He praised county highway workers for their efforts to clear roads of trees and debris "so we could get our trucks through." He also explained that as the utility tackles widespread outages, "We bring on as many as we can at one time; then we get down to single customers."

"There was a lot of flash flooding," and highway workers closed roads or put out "high water" signs, Switzer said. "There were trees everywhere; county roads were covered with trees and debris. They took front end loaders to remove those."

Cleanup efforts continued into Monday, and "I think it will be wrapped up Tuesday," Switzer said.

Flooding occurred, often because culverts were full of debris, but most of that had cleared by Monday. Flooding "wasn't as bad as it could have been," Hojnicki said.

There were isolated requests for sandbags in the Prairieton area, and she was aware of a few water rescues. If there's water on a road, especially moving water, people need to heed the warning — turn around, don't drown, she said.

Fire departments, including volunteer departments in smaller communities, "were extremely busy throughout this ... they were running like crazy the entire weekend," she said.

When major storms happen that involve a lot of downed trees and power outages, "If people can stay home, it helps crews clear the roads a lot faster," which in turn helps get power restored more quickly, Hojnicki said.

Meanwhile, in Fairbanks Park on Monday afternoon, Donna Selman took her lunch break near the Wabash River, picnicking between two large, downed cottonwood trees. She eats at Fairbanks Park two or three times a week and wasn't prepared for what she saw.

"My initial thought was — this is devastating. These trees are so old and so beautiful," she said. She likes to go to Fairbanks because "it's just a beautiful, peaceful place close to work."

George Cesinger, Terre Haute Parks Department director of maintenance, estimated the storm destroyed more than a dozen trees in Fairbanks Park, including three uprooted trees along First Street and the two large cottonwoods along the river.

Early Saturday morning, six trees were blocking roads in the park, and parks department employees did clear the roads well in advance so that the Terre Haute Community Band concert could go on Saturday night.

Cesinger hopes to have a majority of Fairbanks Park cleanup completed by Thursday.