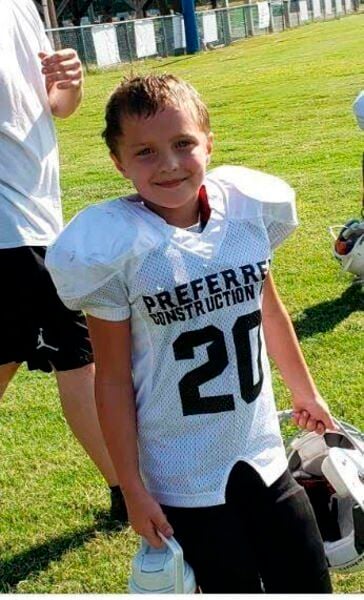 Submitted photoFootball player: The late Leeam Pritcher, 7, in his Terre Haute Youth Football League uniform. “He was a great kid and had an infectious smile,” said Trent Miles, chief executive officer of the Terre Haute Boys & Girls Club. “Everybody loved him.” 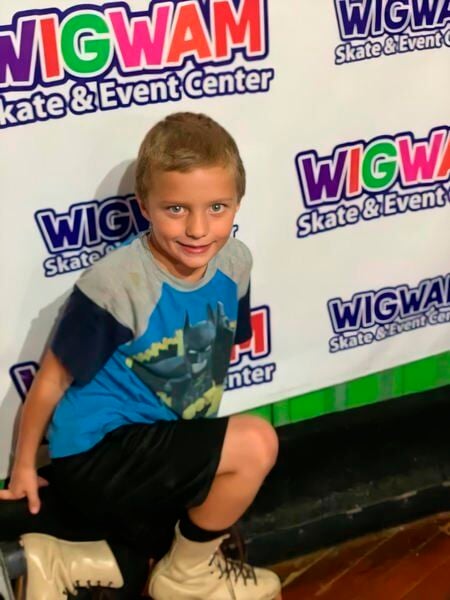 Submitted photoHonored: On Wednesday, Leeam Pritcher was honored at the club’s ball park on Eighth Avenue, where hundreds gathered to show support. The 7-year-old had been on the Raiders team, which was scheduled to play. Other Terre Haute Youth Football League teams were there, as were football players from local high schools.

"He was a great kid and had an infectious smile," said Trent Miles, chief executive officer of the Terre Haute Boys & Girls Club. "Everybody loved him."

Pritcher had been part of the Boys & Girls Club for about four years, playing football and basketball and attending other programs and camps. "He was in the building on almost a daily basis at certain times," Miles said.

Leeam's death has been hard on Boys & Girls Club staff and the children who knew him and were on his teams.

"It's been very difficult. The kids in the club have asked about him," Miles said. The child's death under terrible circumstances "is just hard to imagine." On Monday, the club had grief counselors to speak to anyone who needed it.

"It hit me pretty hard," said Miles, who has four children of his own; Miles' son just turned 10.

Leeam's father, Brandon Pritcher, 27, allegedly beat his son prior to the child’s death. He faces charges including murder, neglect of a dependent resulting in death, aggravated battery and domestic battery. Brandon Pritcher remains jailed without bond; his next court appearance is set for Nov. 12.

On Wednesday, Leeam was honored at the club's ball park on Eighth Avenue, where hundreds gathered to show support. The 7-year-old had been on the Raiders team, which was scheduled to play. Other Terre Haute Youth Football League teams were there, as were football players from local high schools.

There was a moment of silence, and those attending formed a large tunnel for the Raiders to walk through as they went out onto the football field. Team members carried a banner that had Leeam's name and his number — 20; it featured a picture of a football with angel wings and read, "Forever in our Hearts."

Football league team members will have decals with ribbons and Leeam's number on the back of their helmets, and the Boys and Girls Club, along with the Youth Football League, have started a scholarship fund in his name. The scholarship will be for first- and second-grade children who want to play football but can't afford it, Miles said.

The club also plans on a display case in his honor, where they will have the game pants he wore at his last game, his shoulder pads, a jersey, his picture — and his teddy bear.

The Terre Haute Parks Department is donating a bench for the club's ballpark, and "We'll have a plaque made with Leeam's name on it," Miles said.

Nick Williams coached Leeam in both football and basketball. "You get a special bond with these little kids when you coach them," he said. What happened to the 7-year-old "was just uncalled for. It didn't need to happen to such a good little boy."

He'll remember Leeam as "always an upbeat kid. He loved sports — he was a big football guy. He had a couple touchdowns this year."

Leeam "was always happy and always wanted to be there," Williams said.

She also wrote, "Our BGC family has been hurting with the loss of Leeam. Our hearts go out to his family during this unthinkable time. We are blessed to have known Leeam's sweet soul and we miss him dearly. We truly love these kids and we loved Leeam."

In an interview, Stevenson said, "He was always a joy to be around. He was so happy all the time. His blue eyes and smile would just brighten up your whole day," she said. "I remember seeing him nearly every day with all of our staff."

She's received messages from past staff members asking about him and sharing memories. "It shows how much he meant to everyone," she said.

Club staff "are all trying to lean on each other" and focus on the good memories. She said it's comforting to know "we were able to be part of his life" at the Boys & Girls Club.