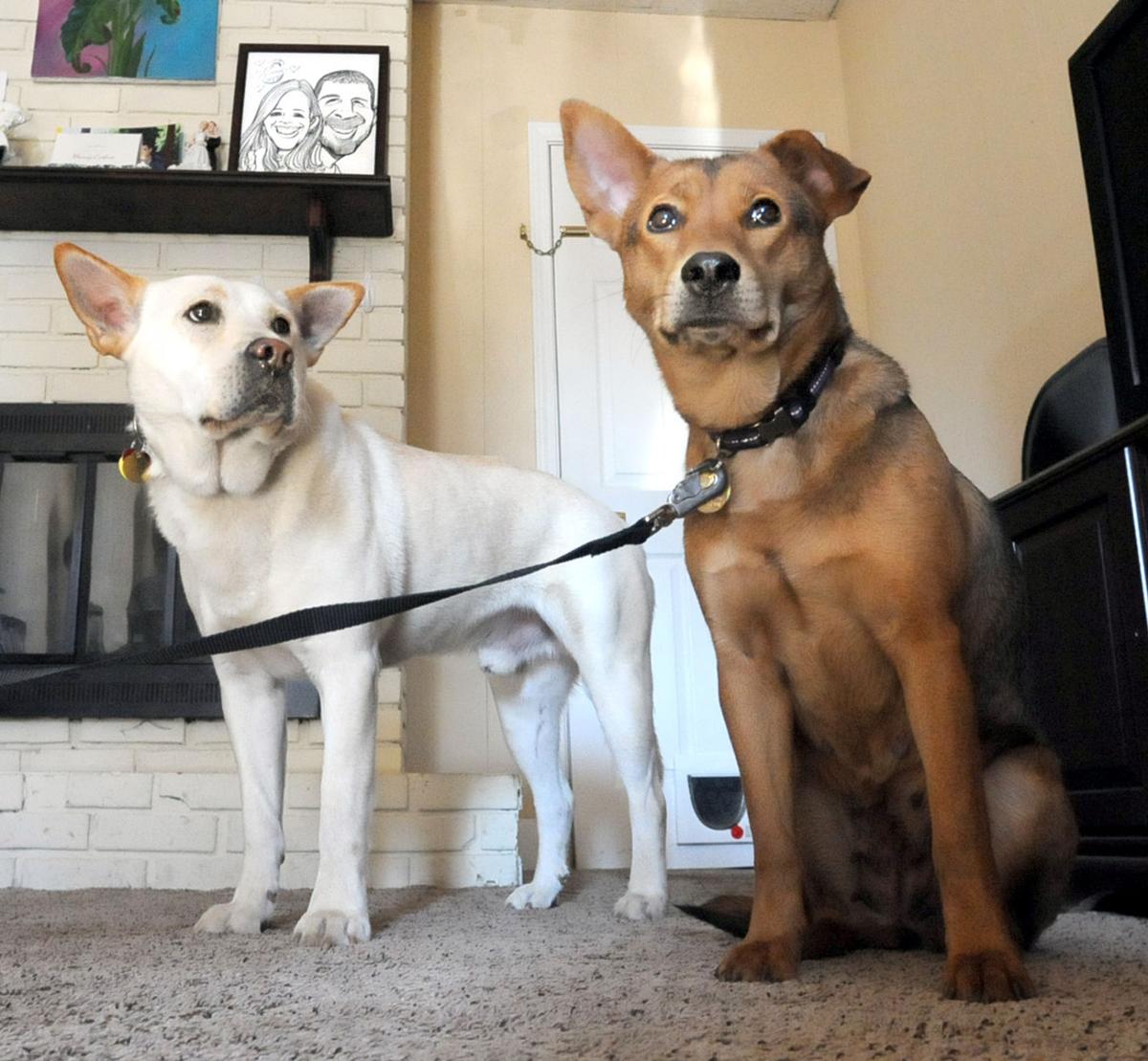 Devoted: "Ben" gives "Jade" an adoring look as they pose for photographs in their new home Friday afternoon. They've been adopted by Jason and Courtney Lawler. 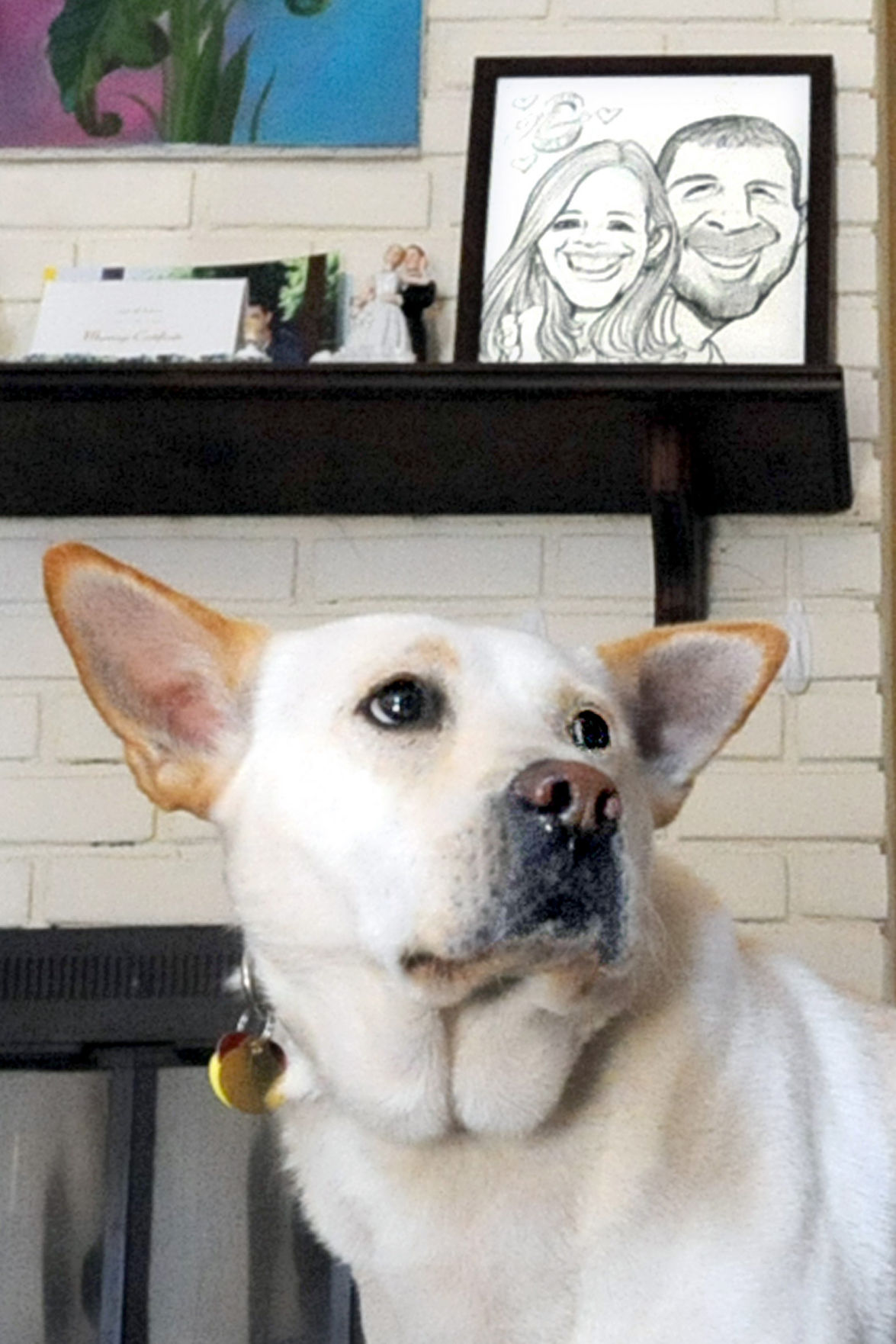 Home sweet home: A carricature of Jason and Courtney Lawler watches over "Ben" Friday afternoon in their Youngstown Meadows home.

Devoted: "Ben" gives "Jade" an adoring look as they pose for photographs in their new home Friday afternoon. They've been adopted by Jason and Courtney Lawler.

Home sweet home: A carricature of Jason and Courtney Lawler watches over "Ben" Friday afternoon in their Youngstown Meadows home.

Ben would do anything for love.

In fact, the 41⁄2 year-old, 70-pound dog ran away from his new, adoptive home in Youngstown Meadows; traversed 10 miles across busy streets, railroad tracks and lonely fields; braved the cold and his own hunger; and somehow, some way, in about 24 hours, found his way back to the Terre Haute Humane Shelter.

And there, he rejoined the love of his life, his soul-mate and the mother of his children, Jade, a 1-year-old German Shepherd mix.

But this love story doesn’t end there.

When Courtney and Jason Lawler, the couple that had adopted Ben, realized the two former strays would not be happy without eachother, they adopted both.

The story of Ben’s trek to find his girl “is amazing,” Courtney Lawler said Friday. The Lawlers knew Ben and Jade were close, and even stayed in the same pen at the shelter.

But initially, the Lawlers decided one pet was enough, for many reasons.

They have a 3-year-old rambunctious son, and Jade seemed “a little more skittish than Ben,” Courtney Lawler said. THHS staff believe Jade was a stray her whole life, until she was taken to the shelter. Jade is not used to being around people.

For a long time, Ben and Jade were strays who lived near Fruitridge Avenue and Fort Harrison Road; different people on the north end, including staff at Benjamin’s Family Dining, made sure they were fed, said Debbie Floyd, president of the Humane Society board.

“Anyone who travels the north end would have seen them,” said Floyd, who works in that area and also fed them.

When Jade got pregnant last summer, “We trapped them and took them to the shelter,” she said.

Ben and Jade remained together at the shelter for several months. “They were a bonded pair,” said Charles Brown, shelter manager.

When Jade had six puppies, THHS adoption counselor Kali Skinner took the mother and puppies home to take care of them for eight weeks, and eventually found homes for all six puppies. Jade was timid, but a “very caring mother,” Skinner said.

Jade and Ben were then re-united at the shelter, until the Lawlers adopted Ben. While Ben had plenty of food, and a warm, loving home …

“When a man loves a woman, can’t keep his mind on nothing else. He’ll trade the world, for the good thing he’s found,” or so goes the Percy Sledge song.

The Lawlers had Ben for about three weeks. On Dec. 28, while Jason Lawler was taking out the trash and talking on his cell, Ben saw opportunity, shot out the door and ran. And ran. And he didn’t look back.

No one’s sure where exactly the path of love took Ben as he made his way to the shelter at 1811 S. Fruitridge, but he got there by last Saturday night.

While he wanted desperately to be with his mate, he did not want to get caught, either. Shelter workers tried four hours on Sunday to get him  — even using Jade as bait.  “He knew it was a trap,” Skinner said.

Jade was inside a fence, and Ben was out. She must have been warning him, because he would not go inside. He did, however, “kiss her through the fence,” said Skinner, one of several who worked feverishly to capture the street-savvy Ben.

The shelter workers renewed their efforts on Monday, New Year’s Eve, and finally used a dart gun to tranquilize and slow him down, although he put up a long, hard fight once again and it took another several hours before they captured him.

“The story, the emotion and the energy it took to track this fellow and get him back to the shelter was amazing to witness,” wrote Sue Berta, a shelter volunteer, who helped recapture Ben, a carmel-colored German Shepherd and husky mix.

Ben and Jade were “visibly happy to see eachother, barking and wagging their tales,”  Brown said.

On Thursday, the Lawlers took the re-united couple home; they had adopted Jade. Ben likes to hide under a bed, while Jade lies on a mat beside him. Both are shy animals uncomfortable around strangers, and the Lawlers hope to receive assistance from a shelter volunteer trained to work with such animals.  “It will take a lot of time and patience in working with them,” Courtney Lawler said.

She described Ben as “content and happy because he has Jade,” while Jade “still has a lot of puppy to her.”

Floyd is grateful to the Lawlers for taking both dogs.

Ben and Jade “want to be together. There hasn’t been a lot of human love in their lives,” Floyd said. “They found love with eachother and that what’s make them happy … Hopefully, they will live their lives happily ever after.”