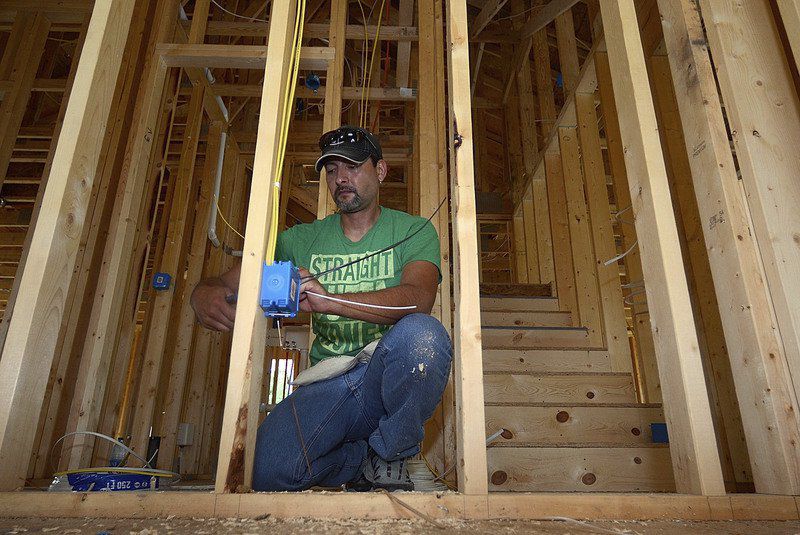 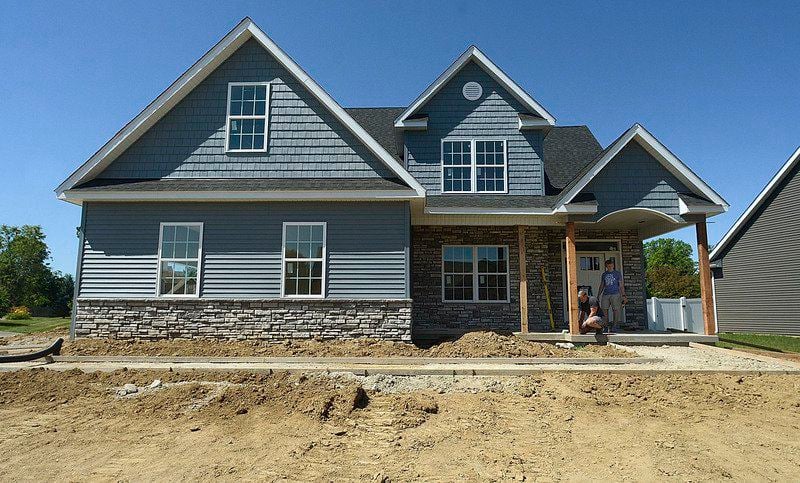 Tribune-Star/Joseph C. GarzaNo slowing down: Brian Maxwell, owner of Maxwell Custom Woods, and his son Wyatt Maxwell set the posts of a porch at a new home in the Watertree subdivision on Thursday. 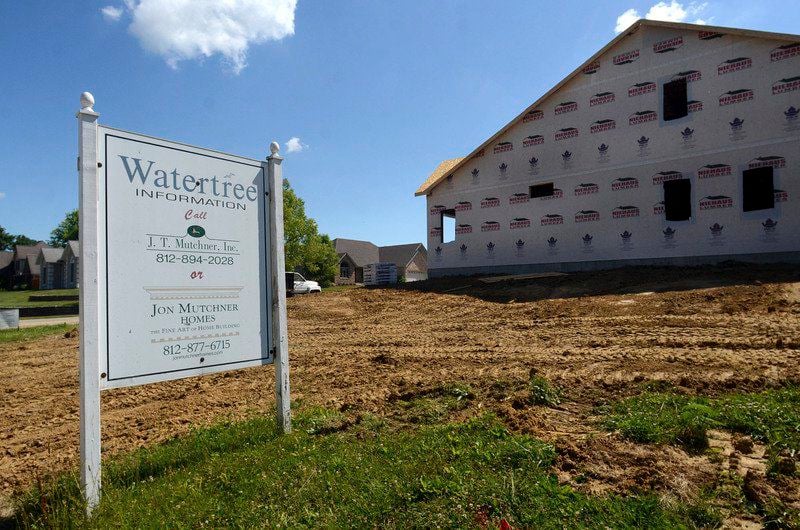 Tribune-Star/Joseph C. Garza “Busy as we can be”: The COVID-19 pandemic has not slowed down the 2020 home building season for builder Jon Mutchner of Jon Mutchner Homes. Here, one of his company’s homes under construction can be seen in the Watertree subdivision on June 25.

Despite a pandemic, building permits in Vigo County and Terre Haute are tracking close to activity in 2019.

"What I see right now, everyone I that talked to in the area is pretty busy. Virtually every builder, subcontractor and supplier that I have talked with are busy. If they are any good, they are busy and that in despite of the COVID. We are happy about that," said Scott Mundell, vice president of the Home Builders Association of Greater Terre Haute Inc.

"Maybe there will be a long-term effect that COVID could have, but that has not hit yet and I hope it doesn't," he said. The association has 132 members, which represent builders as well as associates such as building suppliers.

Building, construction and trades were exempt under Indiana's stay-at-home order in March and April, allowing construction to continue into the spring.

"It is actually great," Mutchner said. "We have had no slow down whatsoever. We are busy as we can be," Mutchner said, adding his business is now constructing six new homes, which is up from last year, he said.

The pandemic, he said, "has not slowed me down one bit. We have worked every day. Luckily they said we are an essential business and we kept going," he said.

"We are seeing housing development in Idle Creek and in Riley, as well as Woodgate South with new condos. I would say we are as good if not better than last year," said Carrie Lindsay, office manager for the Vigo County Building Inspection Department.

"I think a lot of the remodeling permits are being issued because people had time on their hands and a lot were working from home," during a state-issued stay-at-home order during the pandemic, Lindsay added.

This year, the city through mid June has had 340 permits for residential remodeling and 19 commercial remodeling permits. The city has also condemned 63 homes, for 30 to 90 days, and issued permits to demolish 59 homes and two commercial properties. The demo permits range from taking down a garage, to removing homes.

Tribune-Star/Joseph C. Garza “Busy as we can be”: The COVID-19 pandemic has not slowed down the 2020 home building season for builder Jon Mutc…

"Construction has been about the same as last year, maybe a few more, but it is basically the same," said Daniel Bell, Terre Haute city building inspector.

Bell said construction has continued as building trades were designated essential during the pandemic.

"Construction workers can stay outside and can be out in the open, so it did not bother construction that much," Bell said.

As far as demolition permits, the city has an older housing stock, Bell said, with the city usually having at least 50 demolition permits issued annually. The city's Department of Redevelopment works to remove older homes and replace them through housing programs.

Additionally, Bell noted 2020 will still bring large construction projects, to both the city and county, despite the pandemic. Those include construction of a new Vigo County Jail, the downtown Terre Haute Convention Center, a new regional Veteran Affairs outpatient clinic on the city's eastside, which will be near a new casino. That casino project is slated to start construction this fall.