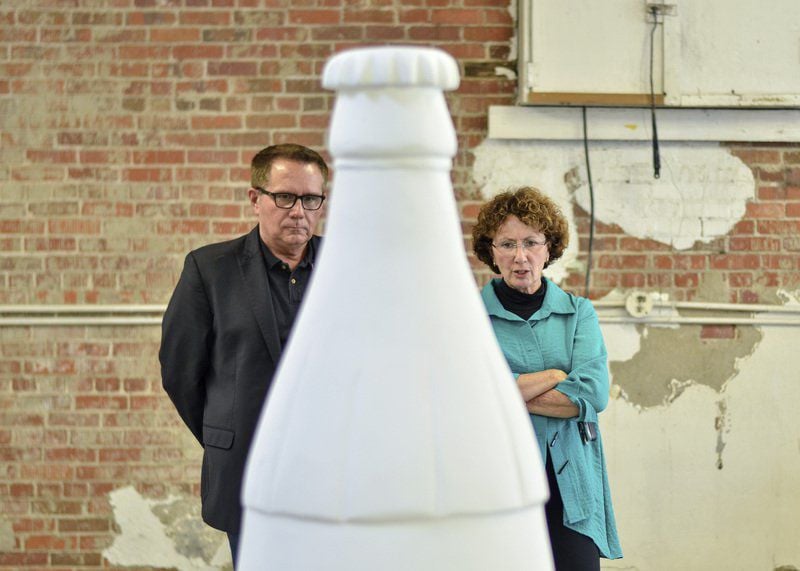 What to do?: Gary Greiner, one of the Coca-Cola contour bottle sponsors, and Annalee Chalos-McAleese, the artist that will design Greiner’s bottle, look over the blank canvas during Thursday’s promotional event at the Mace Building on Walnut Street. 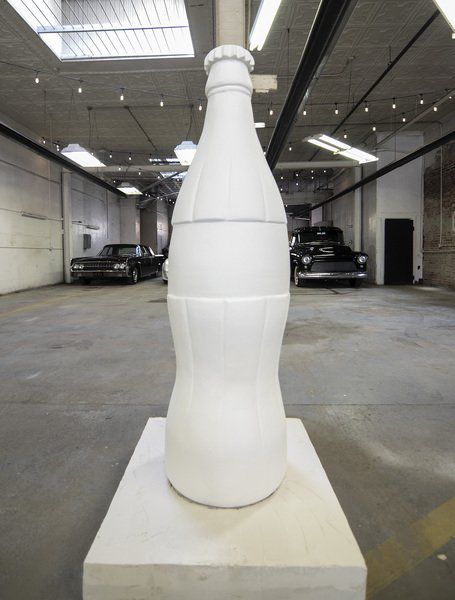 Blank canvas: The Coca-Cola contour bottle public art project will result in 25 of these bottles covered in unique art and displayed around Terre Haute.

A Terre Haute public-art project featuring painted 6-foot-tall, 65-pound Coca-Cola bottle sculptures will carry the name of the family whose company created the contour design in 1915.

That announcement came during a promotional event late Thursday afternoon inside the Mace Building.

“We are excited to announce that the Root family will be serving as our presenting sponsor, and the project will be known as the Root Family Public Art Project,” said Sally Whitehurst, the volunteer leading the project. “It is wonderful to see their continued support of Terre Haute as we pay tribute to this innovative design, which has become a world-famous icon.”

Including the Root family’s $10,000 contribution, there are already 17 businesses, organizations or people sponsoring the project.

“Our community is obviously excited about this idea and supportive of Terre Haute being known as the birthplace of the Coca-Cola bottle,” Whitehurst said. “We have just started soliciting sponsorships and already have 17 of the 25 bottles committed.”

After the speeches ended Thursday, Whitehurst said that this project is “a communitywide initiative.”

“The icing on the cake here is that the Root family heard about our project and they used to live here in Terre Haute,” she continued. “The Root family said, ‘This is just a natural for us, to be the presenting sponsor.’ ... That will help us with our promotion with our signage on the roads — to get people to get off I-70 and come to downtown Terre Haute and see the bottles.”

In addition to sponsoring a bottle, Scott’s Custom Colors and Auto Body is donating the clear coating of all the bottles to protect the finished artwork. The painted bottles are expected to debut at a preview party in the early spring, then they’ll be unveiled at their individual sponsor locations throughout the spring.

Several local artists will be designing the bottles for the sponsors and Arts Illiana will be curating the design process, Whitehurst said, adding that some sponsors have chosen to find their own artist and will work with Arts Illiana for final approval of their designs.

The public-art project is part of a larger effort to make people aware of the city’s connection to the bottle, which has been described as the most-recognized product package in the world, said Teresa Exline, a volunteer leading the larger branding initiative.

The overall goal of the project is to support tourism, promote economic development and instill a sense of community pride, she added.

“Our goal is to have everyone who visits Terre Haute know that our community is the birthplace of this iconic, innovative design,” Exline continued. “We are planning to have signage welcoming people to the birthplace of the Coca-Cola contour bottle, murals on downtown buildings, a permanent art sculpture and a soda fountain and historic bottle display that will be featured on the first floor of the new downtown [Vigo County] History Center under development by the Vigo County Historical Society.”

“The History Center will tell the story of how the Root Glass Co. of Terre Haute won a national contest sponsored by the Coca-Cola Co., which called for a bottle so distinct that you could recognize it by feel in the dark or lying broken on the ground,” noted Susan Tingley, director of development for the Vigo County Historical Society. “This is an amazing part of our local history.”

Tingley said the Coca-Cola display at the new History Center, located in the old Glidden Furniture building at 929 Wabash Ave. and expected to open in late 2018, also will include a replica bottling assembly line.

Cost to sponsor a bottle sculpture is $2,500, which includes a $500 stipend for the artist. For more information on sponsoring a bottle, contact Whitehurst at 812-238-6427 or at swhitehurst@first-online.com.

The overall “Birthplace of the Coca-Cola Bottle” initiative is a sponsored program of the Wabash Valley Community Foundation.