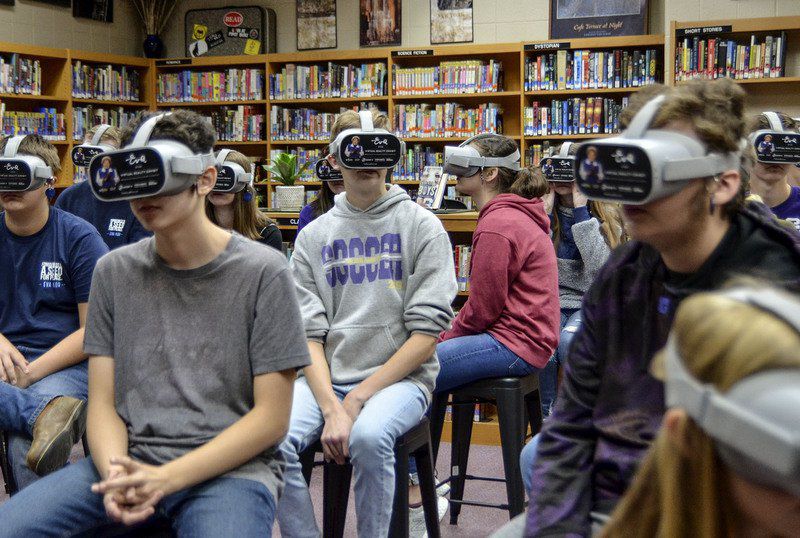 Tribune-Star/Austen LeakeSee for yourself: Freshman English students at Sullivan High School use VR headsets to learn about Eva Kor’s life and legacy as a part of the “Virtual Reality: An Eva Experience” on Monday morning. 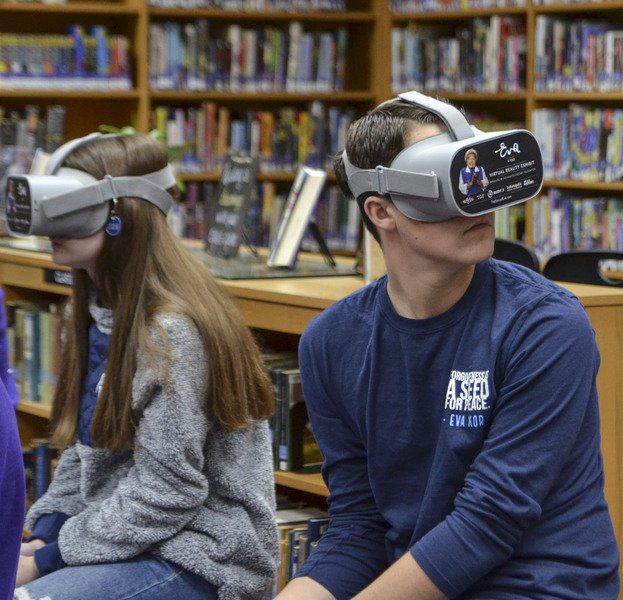 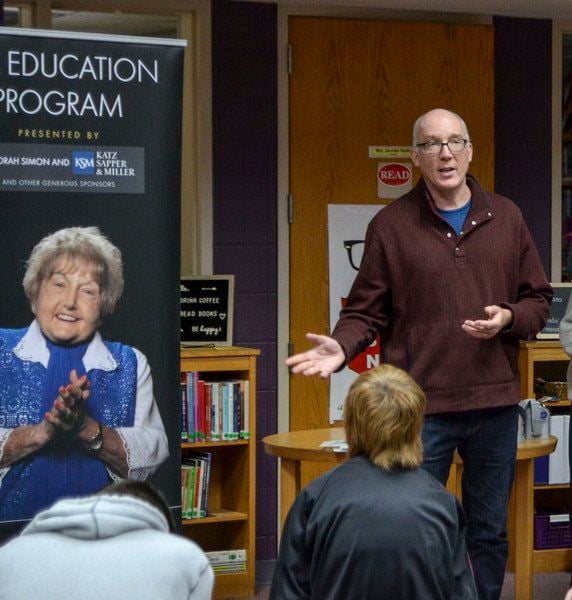 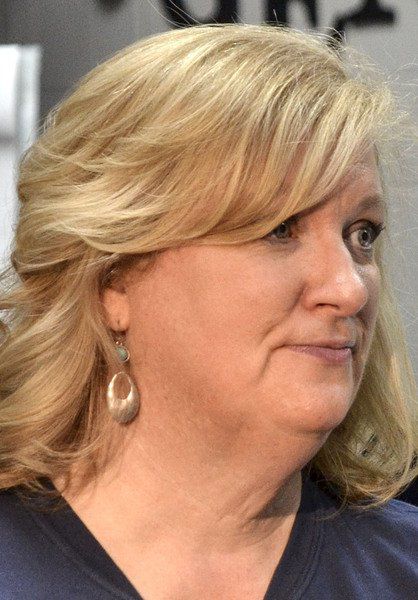 Tribune-Star/Austen LeakeSee for yourself: Freshman English students at Sullivan High School use VR headsets to learn about Eva Kor’s life and legacy as a part of the “Virtual Reality: An Eva Experience” on Monday morning.

The story of Eva Kor, her message of forgiveness and her lessons from Auschwitz live on through a virtual reality tour experienced by Sullivan High School freshmen Monday.

Kor died July 4 in Krakow, Poland, at age 85 while on her annual CANDLES trip to Auschwitz. “Virtual Reality: An Eva Experience” is an educational program continuing her legacy by taking her story to students across the state.

This month, the Sullivan High School students are studying Holocaust literature, and as part of their studies, they donned headsets and were transported to the concentration camp through the 360-degree virtual reality tour that included video narrated by Kor.

“What this does is puts students three dimensionally in the four places most central to Eva’s time in Auschwitz,” said Ted Green, producer/director of the documentary, “Eva: A-7063” who also was involved in the development of the virtual reality educational program.

In the tour, Kor takes viewers to the selection platform; the barracks; the “Blood Lab” where the Mengele Twins were experimented on; and the spot where, 50 years after her liberation from Auschwitz, she announced her forgiveness of Mengele and the Nazis.

WFYI and Ted Green Films combined to develop the virtual reality project, funded with a grant from the Indianapolis Rotary Foundation. Originally intended for a limited program at the Indiana Historical Society, it’s now being used to educate students about the Holocaust.

“We’re getting more requests than we can handle,” said Green, who spoke to small groups of students before and after they experienced the virtual tour. He was accompanied by Jessica Chapman, WFYI Eva project distribution and impact manager.

Among the freshmen who took the virtual tour was Jacob Hawkins. “I thought it was very surreal ... you felt like you were standing there [at Auschwitz],” he said. Kor’s story of forgiveness of those who commit such heinous crimes — including medical experiments on twins including Eva and sister Miriam — was “very inspiring.”

Hawkins added, “I don’t know how she did it [forgave the Nazis]. I don’t know if I could have done it.”

After taking the virtual tour, student Payton Templeton said, “It felt like you were standing right in the barracks and everywhere Eva had been,” including the “blood lab” where the experiments happened.

She said it helped to know how everything really looked instead of just reading about it.

The freshmen also have studied items on loan from the Holocaust Museum of Florida and they are working on multimedia research projects they’ll share next month.

Jennifer Smith, Sullivan High School English teacher and library media specialist, said she hopes study of the Holocaust teaches students empathy and the importance of standing up for others regardless of their differences or different points of view.

Kor encouraged the message of hope, healing and humanity, Smith said. Through their studies, she hopes students “will begin to make an empathetic connection to the importance of freedom and justice for all people.”

Green said people will no longer be able to accompany Kor to Auschwitz, “so we wanted this to be sort of the next best thing, the closest way to replicate it.”

The virtual reality tour “has received rave reviews,” he said. “Teachers are saying the impact on their students is profound.”

He tells students all the time, “This is not someone who is rich, or from New York, or Los Angeles, or someone who works for some big organization ... This is a little 4-foot, 9-inch woman from Terre Haute who lived in a modest home.”

And yet, “She was able to make such a huge difference,” Green said.

And that’s what Green and others hope become the takeaway for students. “Maybe I can’t do everything Eva did,” Green said. “But maybe I can answer Eva’s challenge to think of one way to make the world just a little bit better.”