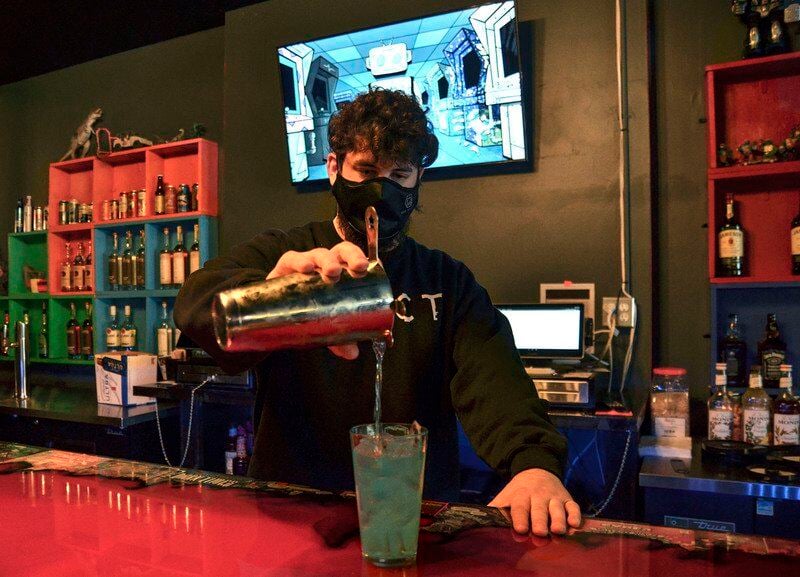 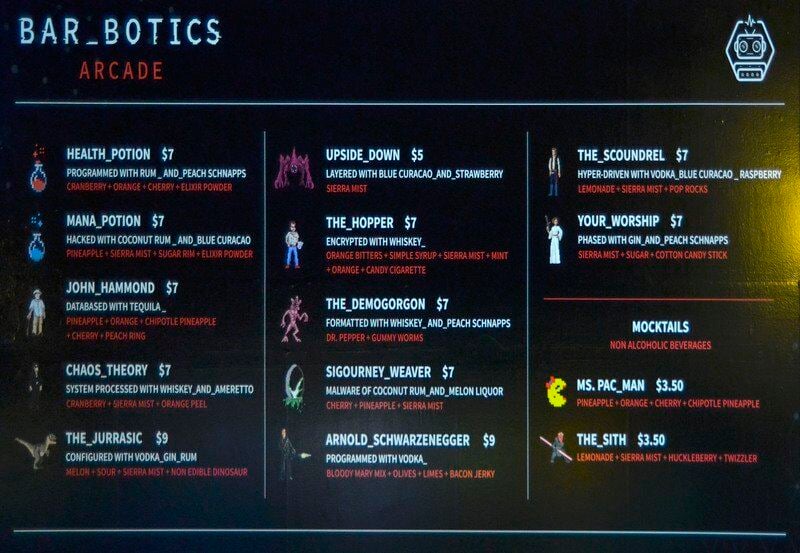 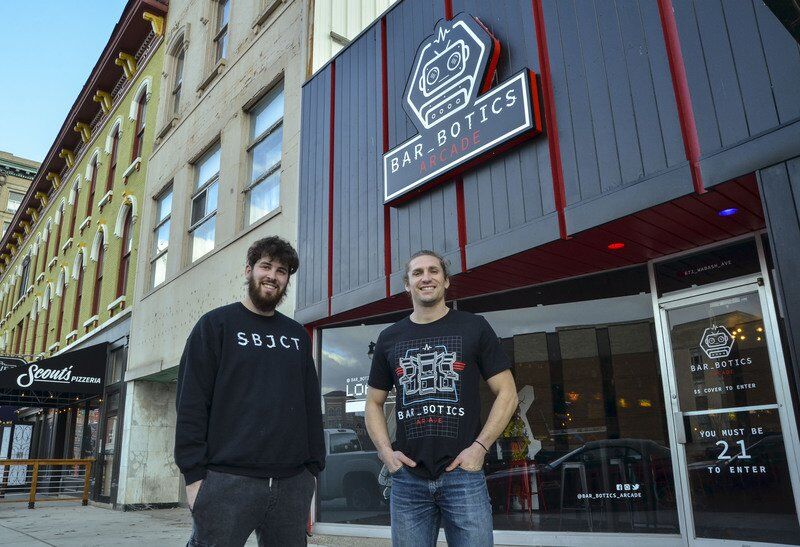 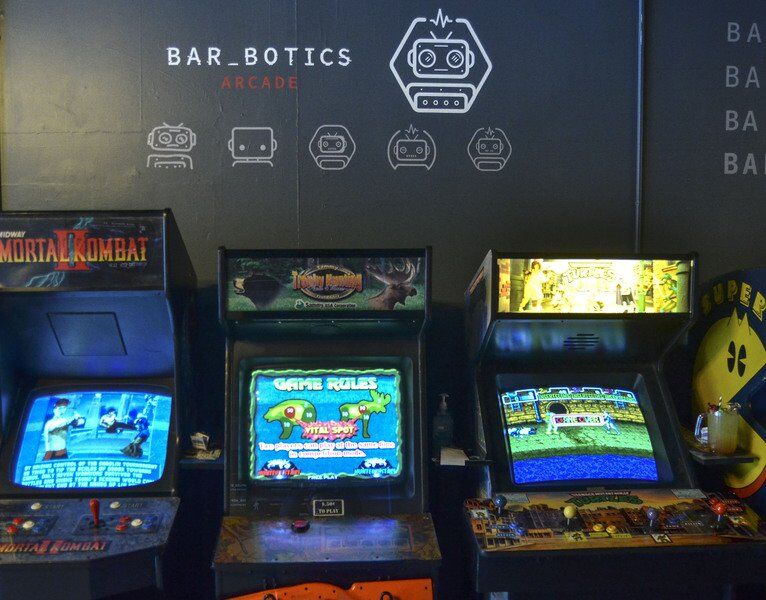 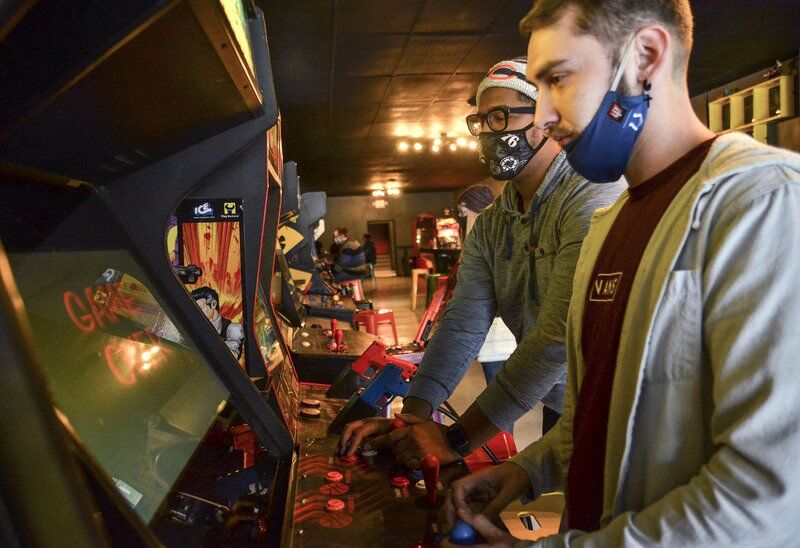 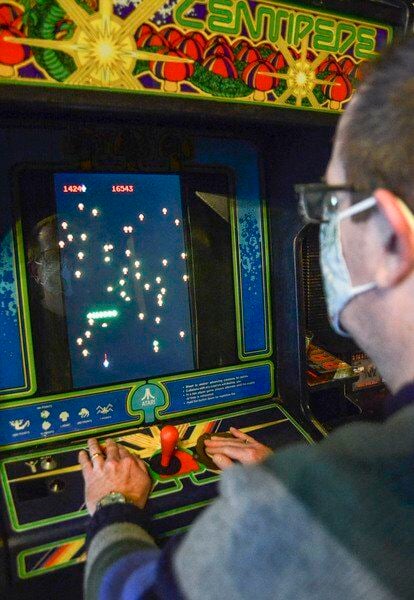 Tribune-Star/Austen Leake Classics: Bar_Botics has machines like Mrs. Pac Man or Centipede for their customers to enjoy.

Tribune-Star/Austen Leake Classics: Bar_Botics has machines like Mrs. Pac Man or Centipede for their customers to enjoy.

Combining the nostalgia of 1970s and 1980s video arcade games with alcoholic drinks is the magic of the new retro-themed Bar_Botics Arcade in downtown Terre Haute.

It’s a place where old school games such as Pac-Man, Space Invaders, Centipede, Missile Command, Trophy Hunting and Donkey Kong return from past popular culture into the 21st century.

The new business at 671 Wabash Avenue officially opened its doors Jan. 15, and is now open daily from 3 p.m. until 2:30 a.m. Cover is $5, but then all video arcade games are free to play.

Bar_Botics is a business venture of Ethan Page and Alec Thompson, who met in January 2019 as each, separately, considered the Wabash Avenue spot for an arcade bar.

Page and Thompson met later that same day. The two discovered each has a talent useful to the new business. Page researched demographics and business costs, while Thompson had graphic design and skills for daily management.

Page is a native of Terre Haute, graduating in 2009 from North Vigo High School and from Indiana University in 2013, with a bachelor’s degree in entrepreneurship from the university’s Kelley School of Business.

“I ran paint companies to pay for college, and started my first venture, Crossroads Events and Timing,” Page said. Crossroads was a full-service event management and race timing company for running events, from 5K runs to marathons or 100-mile events. Page still runs that company.

While arcade bars are not unique to Indiana, with others in Indianapolis, Evansville and in Bloomington, Page said he and Thompson worked to combine the best ideas of other locations in the new Terre Haute business.

The new business has 22 different game cabinets, of which the majority are single games. However, there are five multicade cabinets, four with 60 different classic games, while one has 3,000 games on it, Page said.

“I am confident, between the single and multicades, we have any game you can think of that you want to play when you come in,” Page said.

Unique mixed drinks include the “Health Potion,” with rum and peach schnapps, served with a luster dust. “It is what they use in cake baking. It is edible and causes a shimmer, so it is something unique and different,” Page said.

Other drinks come with candied cigarettes or pop rocks. Drinks are named after games or movies and stars, such as the “Hopper” encrypted with whiskey; the Arnold Schwarzenegger, programmed with vodka; or The Jurrasic, a combination of vodka, gin and rum.

Additionally, Page said the property owner, Kent Kadel, took a precaution that will help the business during the COVID-19 pandemic. It includes an ultra violet system hooked into the heating, cooling and ventilation system that purifies air. Additionally, wipes are provided for games and tables to be wiped off after each use.

The business currently employs seven workers, who will wear face coverings/masks during the pandemic, Page said.