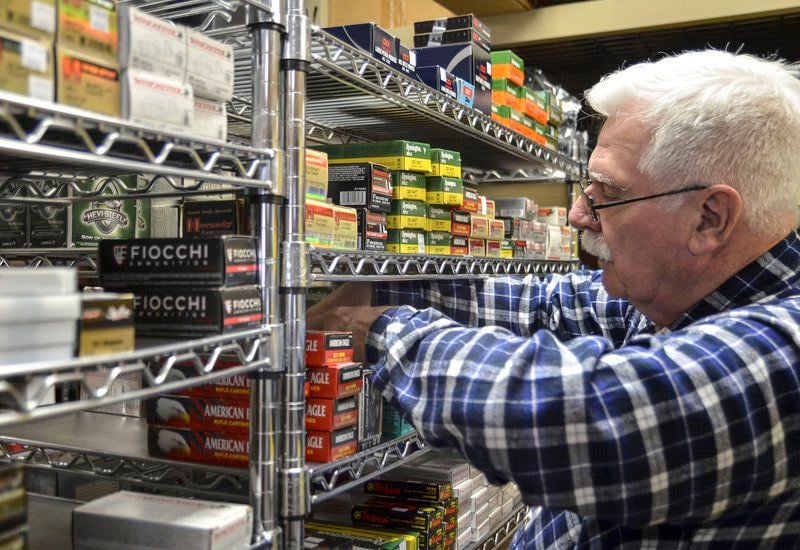 Tribune-Star/Austen LeakeStill in stock: Bill Behnke, owner of the Lost Creek Trading Post in Seelyville, arranges ammunition on a shelf on Friday afternoon. 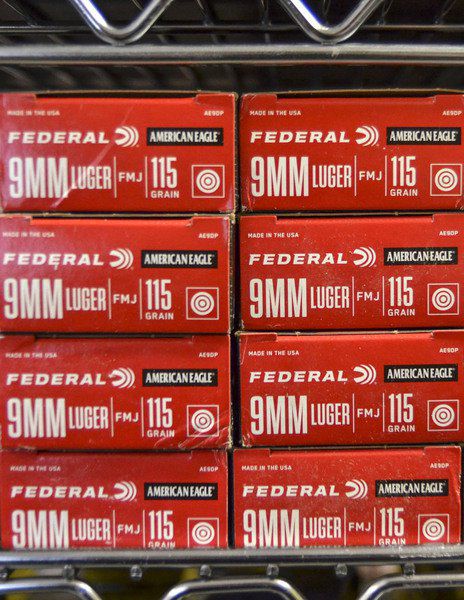 Tribune-Star/Austen Leake Going fast: The ammunition supply at Lost Creek trading post has been flying off the shelves which is true for most stores in the Wabash Valley.

Tribune-Star/Austen LeakeStill in stock: Bill Behnke, owner of the Lost Creek Trading Post in Seelyville, arranges ammunition on a shelf on Friday afternoon.

Tribune-Star/Austen Leake Going fast: The ammunition supply at Lost Creek trading post has been flying off the shelves which is true for most stores in the Wabash Valley.

Firearms owners looking to stock up on ammunition might be waiting a while, or they may need to check frequently with their favorite suppliers.

In the Wabash Valley, the Hoosier state and across the country, merchants are reporting a run on popular calibers. And firearm sales are up, too, dealers say.

Clerks at both Academy Sports and Outdoors and at Rural King this week reported no inventory of 9 millimeter, .40-caliber or .45-caliber ammunition in stock.

“We’ve been insane all week,” a clerk said of sales at Carson Firearms and Archery on Springhill Drive in Terre Haute.

Both ammunition and gun sales have been busier than usual at the store.

“The problem is, we can’t get anything else to replace it,” said the clerk, who asked his name not be used.

At Top Guns on U.S. 41, owner Steve Ellis said the store had sold more than two million rounds of ammunition in less than seven days, and he’s seen a 500 percent increase in firearms sales.

“Any time there’s a scare in the U.S., one of the first markets to go heavy is firearms,” Ellis said. When it comes to ammunition and firearms, people are not only concerned about what might happen but also worry about the possibility of a halt on imports, he added.

Makers have announced price increases and many distributors have run out of or are carefully allotting bulk deliveries, meaning many stores cannot easily restock.

Bill Behnke of Lost Creek Trading Post in Seelyville said he currently has plenty of .40- and .45-caliber handgun ammo and most rifle ammunition, but when he runs out, he can restock no faster than his distributor can obtain ammunition from manufacturers.

Ammunition is made both in the U.S. and internationally, but many U.S. manufacturers rely on overseas components. If there’s a halt on imports, it could eventually mean a manufacturing halt in the U.S., Behnke said.

Since he is in the process of building his new store after moving from a longtime location in Marshall, Illinois, Behnke said his customers must make an appointment and get directions to his new location by calling 812-877-3405.

Mark Cole, owner of Buck Shot Guns and Ammo in Madison County, Indiana, said he noticed the skyrocketing demand on March 17, and it built through the week to a crescendo on March 19, when the Madison County Health Department announced the closure of non-essential businesses.

“My sales were down 80% and then this week I did as much as I normally do in July and August,” Cole said.

The health department clarified its order on Friday, saying non-essential businesses could remain open at their own risk if they limited occupancy to 10 and practiced social distancing by having customers and staffers remain at least six feet apart.

Chi Baldwin, owner of C&J firearms in Frankton, noticed his business pick up March 14. “I have done more business in the last six days than I have the last two to three months combined,” said Baldwin.

Home defense guns and ammo topped people’s shopping lists. Both shops were out 9mm. Most shotgun shells and cartridges for the popular AR-15 platform were in short supply.

Cole and Baldwin both said the sales pace may be driven by fear.

“You can just see the fear, this is unprecedented the amount of restrictions that the government is doing with this disease — at least in my lifetime,” Cole said.

“This kind of a situation nobody has ever been in, and people right now are just scared of what may happen,” Baldwin said.

The situation seems much the same across the nation.

At Target Sports USA, one of the country’s most popular online retailers of ammunition, the site’s homepage on Saturday was topped with a large, highlighted message advising customers that Target Sports is still taking orders but the company’s shipping is delayed 12 to 15 days because of order volume.

A quick check of Target Sports 9mm handgun ammo stock shows a handful of choices in premium, hollow-point defensive cartridges, but “ball” or full-metal jacketed 9mm generally used for practice cannot be added to the online customer’s cart. Instead, online shoppers can instead choose the “notify” option and get an email when that cartridge comes back in stock.

At Midway USA, a national retailer for all things related to the shooting sports, rounds for the 9mm handgun are nearly all marked “temporarily unavailable.” The situation at Midway’s website on Saturday was nearly identical for rounds for the popular AR-15 rifle.

At SG Ammo, another ammunition seller, the homepage on Saturday was topped with a message saying due to overwhelming order volume, SG wasn’t taking new orders but hoped to “restore limited inventory options on Monday the 23rd or once we have a handle on shipping all orders that have been placed so far.”

Specific data on the spike in gun sales won’t be available until next month, but already this year background checks are up considerably over last year, the Associated Press reported. According FBI data, just over 5.5 million background checks were conducted in January and February combined.

And while gun sales generally rise in an election year, this past January and February gun sales have outpaced 2016 by nearly 350,000.

In Smyrna, Georgia, Jay Wallace owns Adventure Outdoors, which bills itself as “The World’s Largest Gun Store,” with more than 130 yards of gun counters and 18,000 guns in stock. Wallace said his ammo sales have increased five-fold.

“It’s been insane,” Wallace told the AP. “This is like a Rod Serling ‘Twilight Zone’ episode.”

Also contributing to this report were Mark Fitton of the Tribune-Star, Don Knight of CNHI News Indiana and Lisa Marie Pane of the Associated Press.