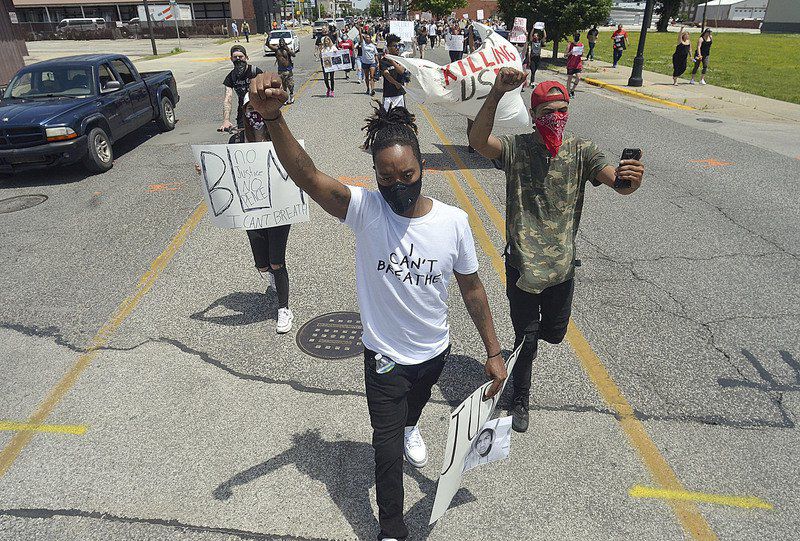 Tribune-Star file/Joseph C. GarzaBlack Lives Matter: Erick Beverly leads a chant and a march down Wabash Avenue in downtown Terre Haute on Saturday, May 30, in the wake of the killing of George Floyd. 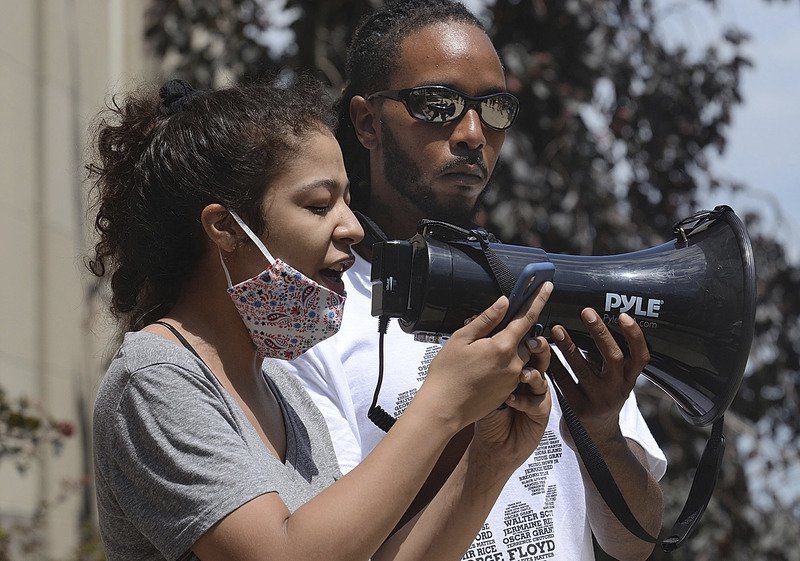 Tribune-Star file/Joseph C. Garza Words to inspire: Dominique Morefield shares a poem with the crowd as Erick Beverly holds a megaphone before the start of the Walk for CommUNITY on June 6 on the front steps of Terre Haute City Hall.

Beverly is listed as the registered agent, incorporator and CEO, according to articles of incorporation filed with the Indiana Secretary of State’s office.

A statement of purpose says the nonprofit “is looking to keep spreading peace and love through the Vigo community. We have just here recently organized two very successful events for the Vigo County community. Our goal is to bring change to Terre Haute providing a service like no other. Rebuilding, educating the youth, showing change along with so much more for the community.”

Change of Terre Haute is listed as a public benefit corporation, which is organized for a public or charitable purpose.

In a recent interview, Beverly said he’s not yet ready to discuss details about the nonprofit, which is still in formation, or others who are involved.

“That’s something we’re working on,” he said. “It’s here for the community. We want to make a stand for Black lives. We want to stand for the people facing poverty.”

He added, “Before you are able to walk, or jog or sprint, you first start off by crawling. Right now we’re in the crawling process.”

Beverly helped organize marches along Wabash Avenue on May 30 and June 6, which were held in response to the May 25 death of George Floyd at the hands of police in Minneapolis.

He doesn’t seek credit or recognition for his role. “We should be commending the people who gathered” and peacefully protested, he said.

Born in Tucson, he moved to Terre Haute with his family when he was 6, and the family moved back to Arizona several years later.

He spent part of his youth in Indianapolis, but eventually his family moved back to Terre Haute and he attended both North and South Vigo high schools.

The 35-year-old works for a company in Clay County and is pursuing his bachelor’s degree in business administration at Indiana State University. He has two sons, ages 3 and 6.

As far as the nonprofit, “The first thing we want to do is we definitely want to stand up for Black lives ... but if you look around right now, the nation is in a dark spot,” Beverly said.

In the Vigo County School Corp. alone, about 55 percent of students qualify for free/reduced lunches, he said, describing the many families seeking out the district’s free breakfast/lunch program during the pandemic and also this summer.

“These issues definitely have to be addressed,” he said.

Change of Terre Haute is not just about Black lives. It represents every race, Beverly said.

“We’re all fighting hate — just unite everybody through love.”

Supporting Beverly and Change of Terre Haute is Pat Robinson, who moved to Terre Haute from northwest Indiana about a year ago. He is a mechanical engineer and works for a utility company.

The efforts of Change of Terre Haute will focus on, “What can we do to make the community better for all people?” Robinson said. “It’s not a race thing.”

Robinson added, “We don’t have many organizations in Terre Haute that are really fighting for the people and for change.” He wants to be part of that effort.

People need to help bring each other up, he said. “If we’re all calling ourselves Americans ... If I come up, then you come up. If I’m doing well, then you’re doing well,” Robinson said.

Robinson said he has “actually fallen in love with this area,” because he’s seen people “willing to make the change and be part of something greater.”

Beverly said while his organization is independent of others with similar goals, “We’re willing to work with anybody that is willing to support the movement and help the community.”