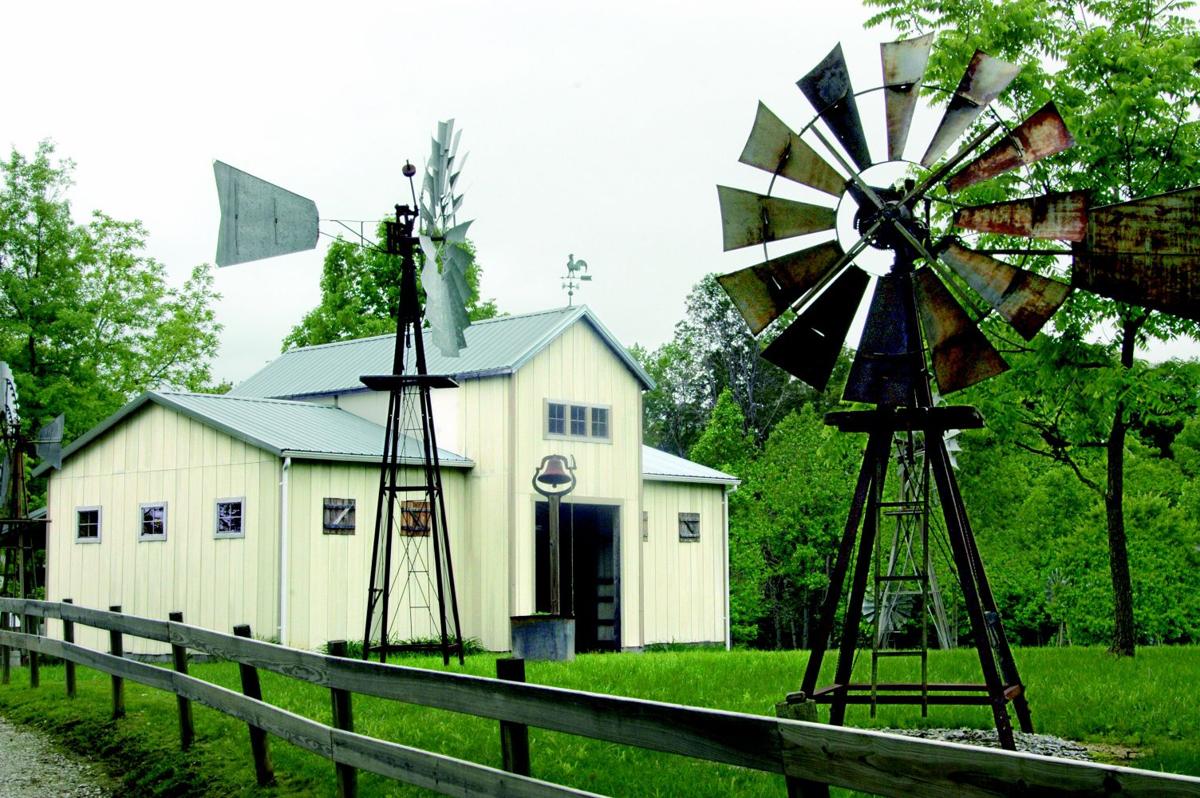 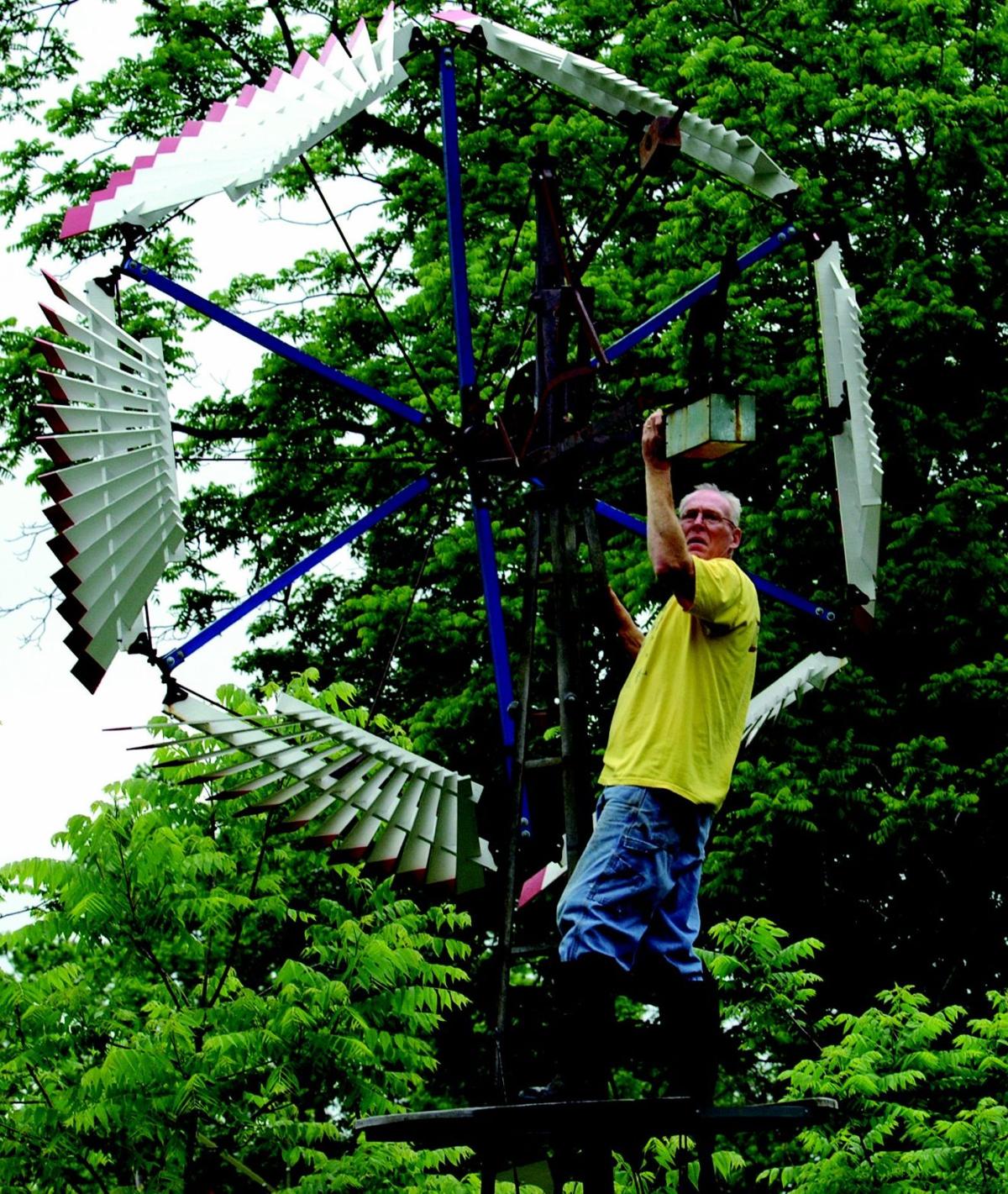 Adjustment: Neal Yerian works on one of his Friday afternoon on his Clay County property. 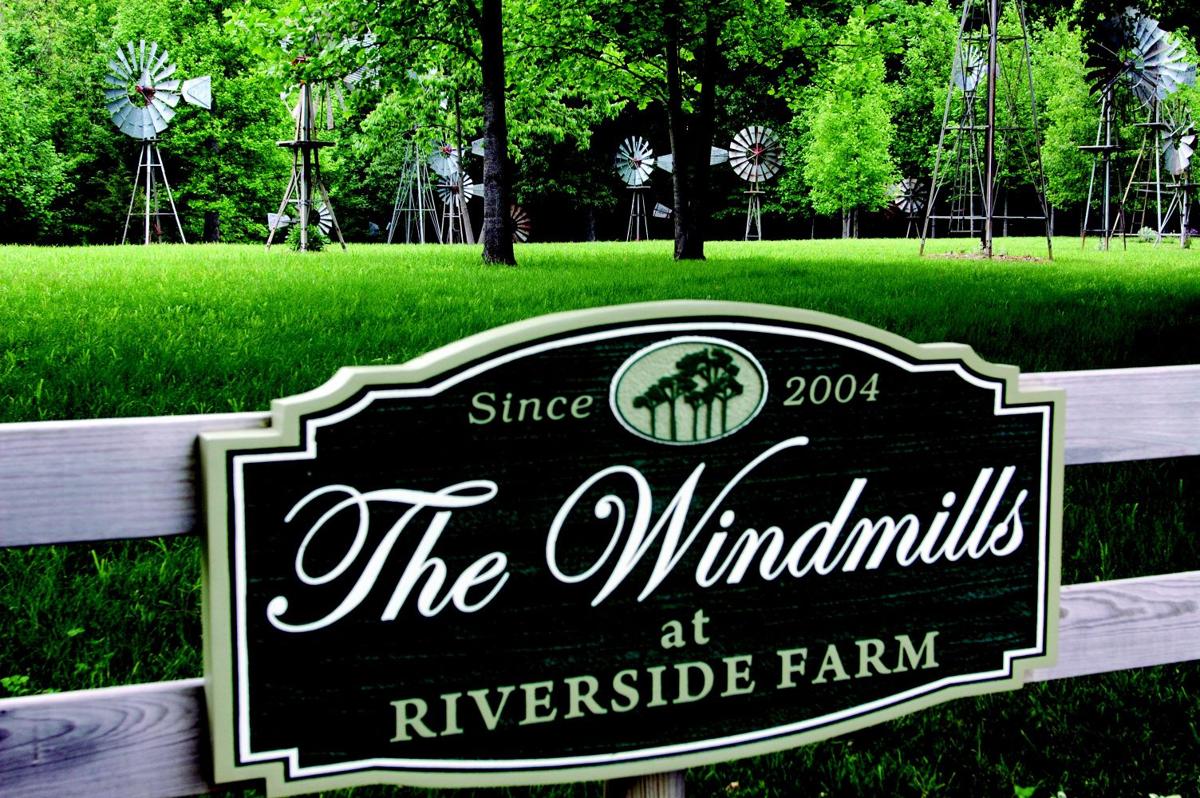 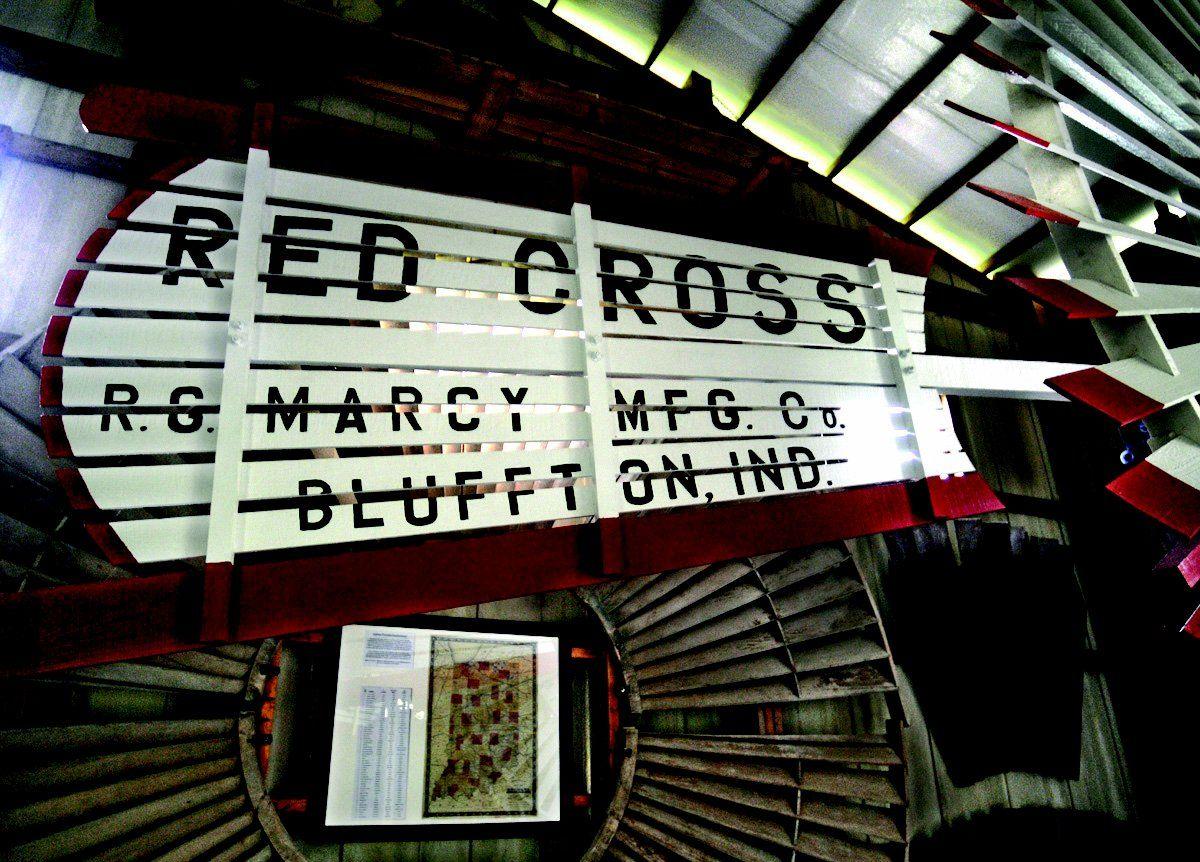 Mill barn: Detail photo of one of the windmills on display. 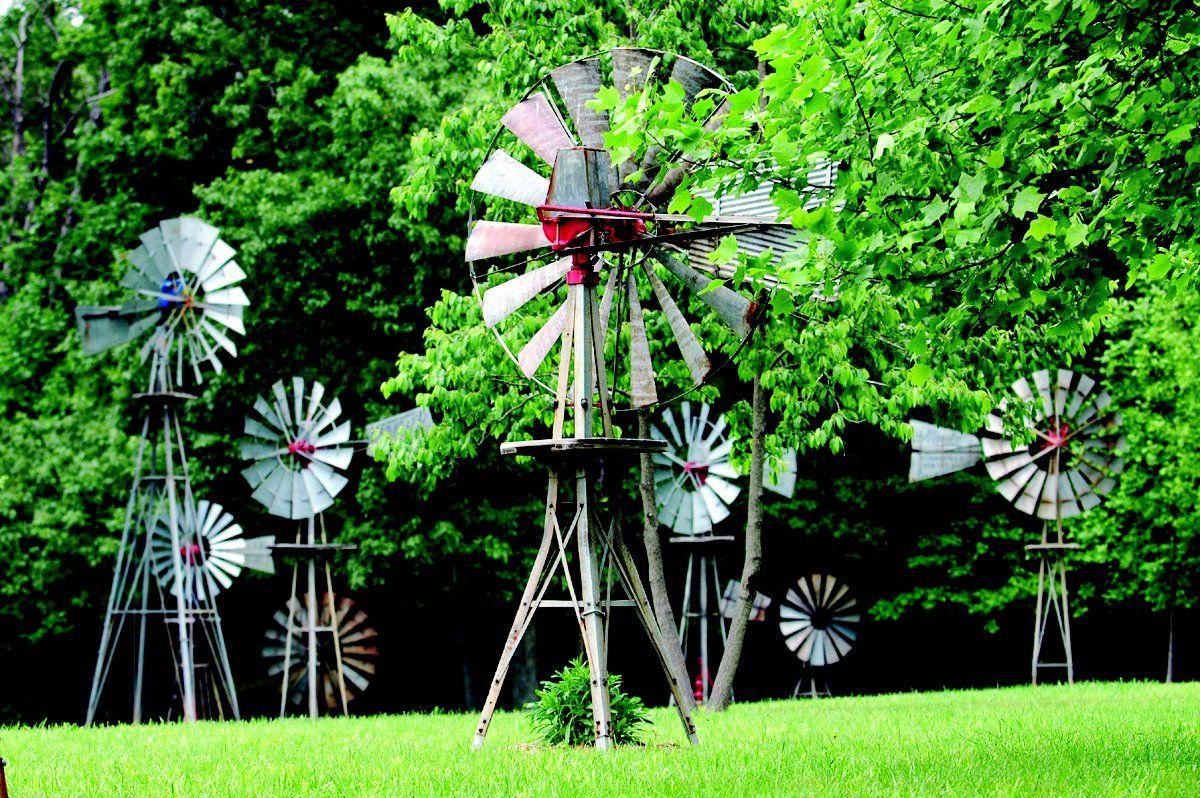 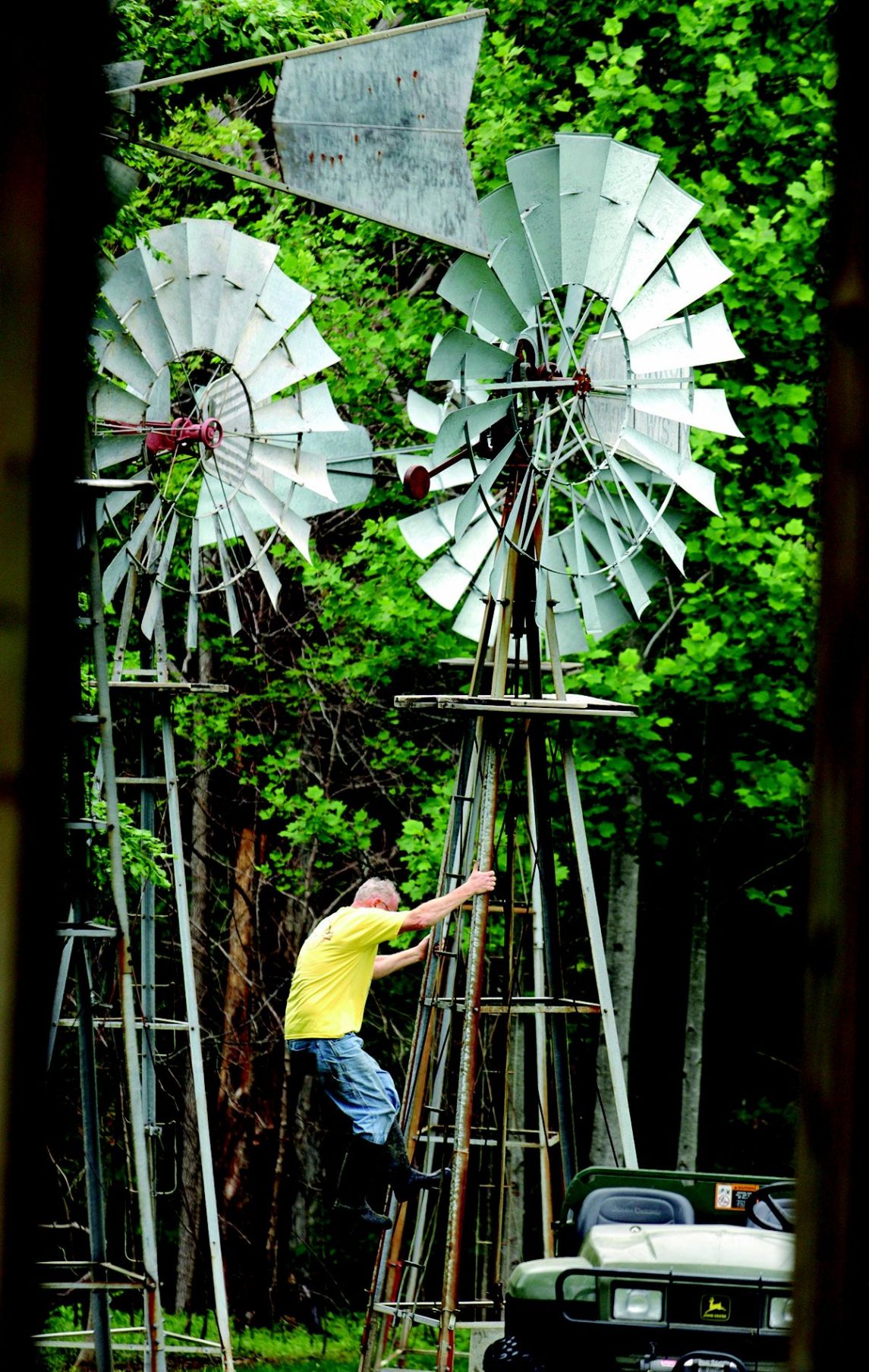 Mill management: Neal Yerian works on one of his windmills Friday afternoon on his Poland, Indiana property. 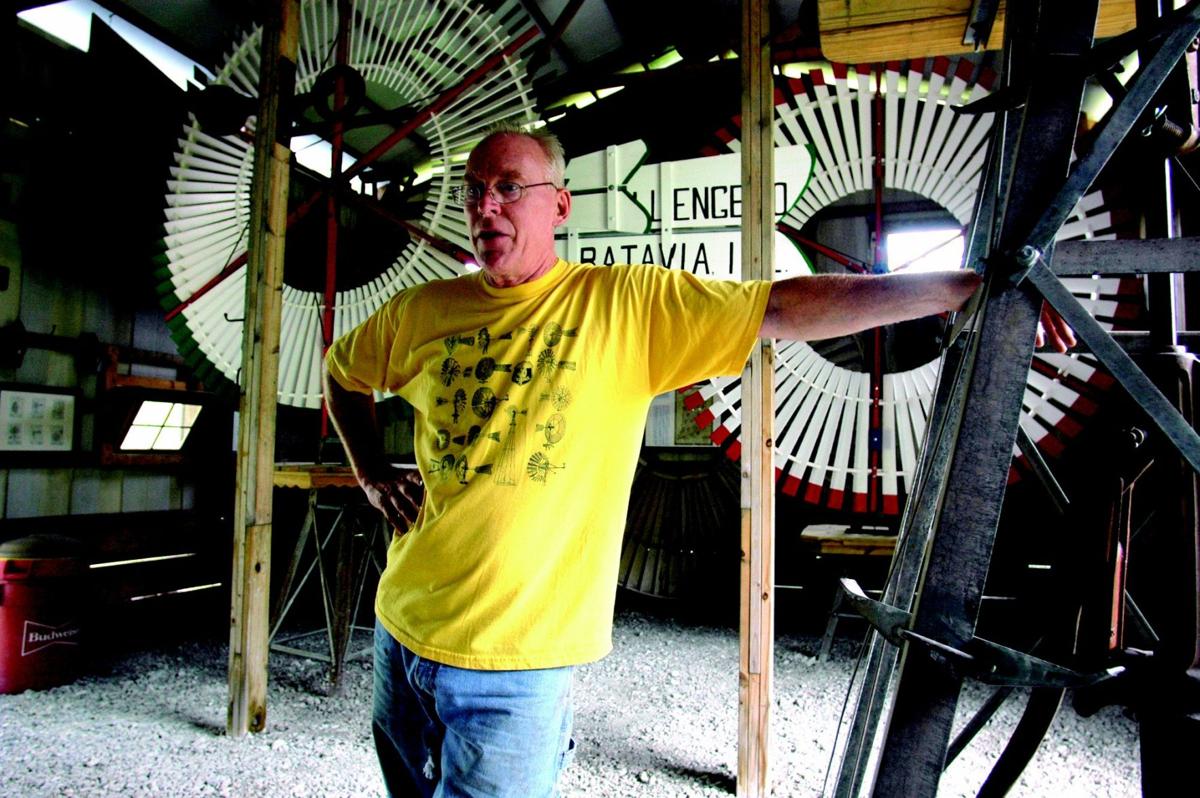 Neal: Neal is the owner-operator of The Windmills near Poland, Indiana in Clay County.

Adjustment: Neal Yerian works on one of his Friday afternoon on his Clay County property.

Mill barn: Detail photo of one of the windmills on display.

Mill management: Neal Yerian works on one of his windmills Friday afternoon on his Poland, Indiana property.

Neal: Neal is the owner-operator of The Windmills near Poland, Indiana in Clay County.

Clay County windmill farmer Neal Yerian had taken no more interest in wheel and tail windmills that pump water than tens of millions of his fellow Americans until a day when he had passed long and fruitless hours sitting in a deer stand erected on his property in rural Texas near Dallas. Being an avid hunter, he had positioned himself in the stand countless times over the years, never paying more attention to the dilapidated windmill standing across the field in front of him than he might have given a tree stump on his back 40.

“For some odd reason, that day I started glancing over at the windmill,” said Yerian. “After I gave up on hunting late in the afternoon, I walked over to take a look at it. I had owned that property for 15 years, but this was the first time I had ever given the windmill a close look.”

Before Yerian had finished studying the windmill, he was curious about how it was supposed to operate. He had seen other windmills out on the Texas prairie with a wind wheel and a tail, but the wheel and tail that had been on his dilapidated windmill were gone.

“Then it struck me,” he recalled. “It might be cool to fix this thing up!”

Little did Yerian know that he was on his way to becoming one of the world’s foremost windmill experts, eventually the proud owner of 53 windmills capable of pumping water on his farm near Poland — he also has parts enough on hand to erect several more in the near future. Yerian’s immersion into windmill lore, heritage, and physics is so complete that on his property in Poland he has built a museum devoted to the history of windmills, and he is the creator of two of the world’s most elaborate windmill Websites.

Not long after Yerian got his idea that fixing up a windmill might “be cool,” he discovered that it was all but impossible to find detailed information about the many different kinds of historic windmills, even though there were scads of them to be seen in the Texas countryside, though mostly in states of disrepair.

After considerable scouting about, he found a Texan well service repairer, Mark Welch, who was able to help him, and through Welch, he learned that the windmill on his property near the deer stand was a Baker-Monitor, which had been produced in the 1940s. Welch gave him tips on what he needed to do for renovation, including restoring its wheel and tail.

As Yerian began fixing up his Baker-Monitor, his curiosity led him to study water pumping windmills in general, and he became aware of how important wheel and tail windmills had been in the history of the United States, especially in the 1800s.

“Here’s why: back in the day, homesteaders had to water their livestock. If a homesteader’s ground was on a year-round creek or river, it was not all that difficult to run water up to livestock, but if the family did not have such access, they needed a pump. A cow takes 35 gallons a day and 10 cows would take 350 gallons. Add it up: a farmer or a rancher would not be able to do anything but pump water if he did not have a windmill that could pump for him! On the wide open plains like those in Texas, a 10,000-acre ranch might have used 50 windmills.”

Europe and the United States had been producing windmills since the 1600s and 1700s, but they were easily damaged in windstorms until in 1854 when a New Englander named Daniel Halladay patented a self-governing wheel and tail windmill that acted somewhat like a sailboat in that it used a cast iron governor weight to enable the wheel to turn by itself at a relatively safe angle to a high wind. And then, at a low wind, in order for the windmill wheel to draw more wind into its spinning vanes, the cast iron weight turned the wheel back to face the wind and use its energy to draw water.

“By having this new windmill technology at their disposal, homesteaders, ranchers, and farmers with livestock could effectively manage larger and larger pieces of ground,” Yerian said.

“In the early days, without good communications between regions of the country and few regulations dealing with patents and trademarks, windmill capitalists were truly cutthroat competitors who would do anything to gain a competitive edge on their rivals, including stealing their technical ideas and marketing concepts, even their names. To protect their parts aftermarkets, companies designed their windmills so that competitors’ parts would not fit theirs.

Not only did the unregulated companies use competitive methods that would land them in a courtroom in modern times, they also attempted to get a leg up on one another by product improvements. Wooden windmills became steel, and therefore more sturdy in high winds, but as windmill construction materials were transitioning, wooden windmill manufacturers fought the change all the way, mocking steel manufacturers’ products as being high maintenance and too expensive. Then in the early 1900s, steel windmill makers found a way to develop self-oiling windmills, which held a competitive sway over the market up through the 1940s.

Complicating matters all the more for modern day windmill restorers, because 1800s transportation was not what it is now, windmill manufacturing firms sprang up everywhere. Indiana alone used to have 63. One way the firms competed with each other was by setting up county fair displays — sometimes as many as 20 competing types of windmill companies at a time would display their windmill wares at county fairs in Indiana and other states. During the Chicago World’s Fair of 1893, the Lake Michigan waterfront became a phantasmagoria of large steel windmills competing both visually and in terms of the efficiency of their wheel and tail governors and their design models.

Yerian said the large number of windmill companies and their competing designs make a modern restorer’s life very challenging because missing parts can be so difficult to acquire, and in some cases the windmill diagrams, literature, and parts lists of long defunct windmill manufacturers are all but lost.

By the time Yerian had finished renovation with his Baker-Monitor windmill, he was a windmill addict. Then, in 2004, he decided to move up to Indiana and build his windmill farm. His wife, Lesley Osborn Yerian, was a Terre Haute native, and her family had owned properties in the Poland area since the 1850s. The Yerians purchased some acreage from relatives. Soon after he took possession of the land, windmills galore began popping up, amounting to 53 at last count. All are in working order, but only one is actually pumping water for display purposes. The windmill towers are not as tall as the originals were so that visitors to the windmill farm can better see the machines operating from a ground level vantage point.

The barn for Yerian’s windmill museum was constructed in 2007. His original reason for building it is that he had some very old wooden-wheeled windmills that he did not want to erect standing out in the wind. His museum displays windmills in their stages of evolution and offers explanations of product features such as how the self-governing aspect of the weights patented by Daniel Halladay revolutionized windmills. Yerian’s museum and display grounds also show how steel windmills evolved into self-oiling structures that became much more customer friendly than their more primitively designed steel predecessors.

One of Yerian’s favorite museum wall displays is a 12-foot wind wheel that he came into possession of through the tip of a farmer who lives in the Logansport area. The wheel was manufactured by the King Drill Company, which had its headquarters in the Logansport area, where the firm manufactured Columbia and Aldrich windmills. Another of Yerian’s wall pictures shows the fantastic assemblage of windmills at the 1893 World’s Fair.

Yerian’s museum and grounds are free. He keeps it open every Friday through Sunday during warm weather months.

“I get about a half-dozen visitors a weekend,” said Yerian. “My place is very remote, so only a few chance passersby see it as they are driving down the road, but occasionally my windmills catch the eyes of people out on Sunday drives, motorcyclists, mushroom hunters, and folks driving around hoping to come across a covered bridge.”

Yerian’s indefatigable research into the minutiae of the wheel and vane water pumping windmills has led him to develop two websites for the purpose of sharing information about windmill parts and history. One site, Windmill-Parts.com, averages 8,000 worldwide hits daily. The other, VintagewindmillPartslist.com, gets 1,500 hits daily.

“All kinds of people need information about windmills,” said Yerian. “I can usually help prospective restorers identify the kind of windmill that they have by looking at a picture of it.”

Yerian says that most of the hobbyist windmill aficionados he comes into contact with grew up on farms and rebuild windmills like vintage car lovers might pass their free time on an old Model T. He feels that his website has saved many people countless hours of unnecessary research.

During the years of his involvement with windmills, Yerian has moved beyond devoting most of his time to restoring old windmills. He now makes himself available to people who want to set up windmills on their property, whether new or restored. To enable people to do this, he has developed a connection with a foundry to custom build windmill parts when necessary. Yerian also custom fabricates wheels and tails for any kind of windmill to original manufacturer’s specifications.

All profits are rolled back into Yerian’s windmill farm to defray its operating cost and to enable him to acquire more historic windmills for his farm and museum when he comes across ones that interest him.

“Water pumping windmills are still in practical usage by quite a few people,” Yerian said, “including ranchers who want to save money on electricity by pumping water with a wheel and vane windmill, and the Amish — I get a call from an Amish man about once a week who stops his horse and buggy along the road at a public phone to call me. Since they cannot use electricity in their own homes, they need their windmills, and I am ready to help them.”