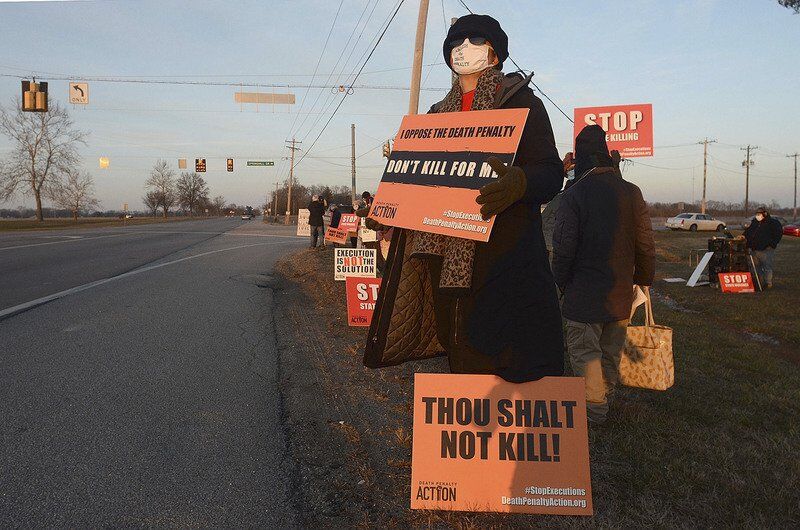 Tribune-Star/Joseph C. Garza Signs of opposition: Karen Burkhart holds a sign as she stands across the road from the Federal Correctional Complex in Terre Haute to protest the execution of Lisa Montgomery on Tuesday. 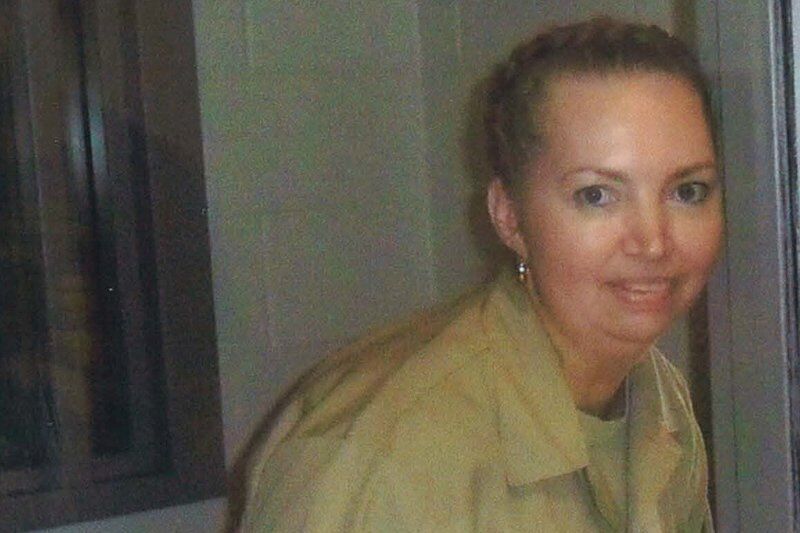 Via Associated Press This undated file image provided by attorneys for Lisa Montgomery shows Montgomery. She was convicted of killing a pregnant woman and cutting the baby from her womb in the northwest Missouri town of Skidmore in 2004. 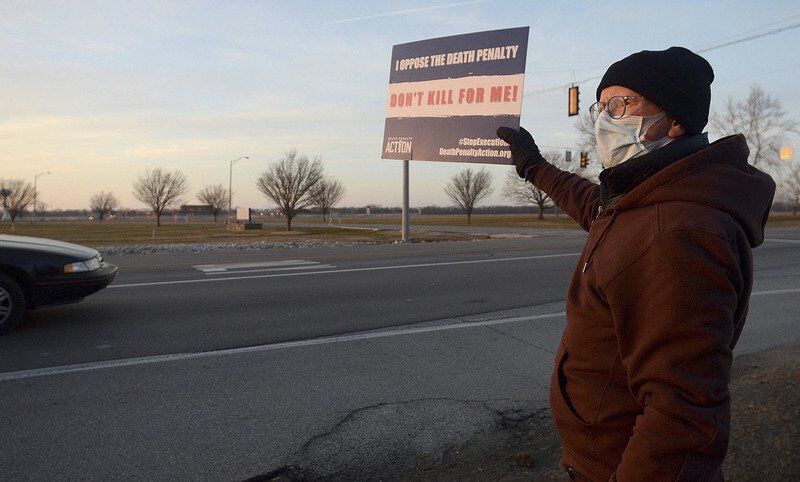 Tribune-Star/Joseph C. Garza Opposed to the execution: Death penalty opponent Wes Janz of Indianapolis holds up a sign for passing motorists to read as he and others protest the execution of Lisa Montgomery on Tuesday near the Federal Correctional Complex in Terre Haute.

The U.S. government’s plans to carry out its first execution of a female inmate in nearly seven decades were on hold late Tuesday night.

Federal Bureau of Prisons personnel, media and other witnesses were still waiting 10 p.m., four hours after the scheduled execution of Lisa Montgomery at the United States Penitentiary in Terre Haute.

The DOJ on Tuesday evening asked the U.S. Supreme Court to vacate the last remaining stay, which was issued by Eighth Circuit Court of Appeals and has to do with whether execution was scheduled properly. It would appear to be the last roadblock for the government to proceed with the execution.

The Supreme Court had already lifted a separate injunction that was put in place by the U.S. Circuit Court of Appeals for the District of Columbia.

Montgomery faced execution Tuesday for killing 23-year-old Bobbie Jo Stinnett in the northwest Missouri town of Skidmore in 2004. She used a rope to strangle Stinnett, who was eight months pregnant, and then cut the baby girl from the womb with a kitchen knife. Montgomery took the child with her and attempted to pass the girl off as her own.

Death penalty opponents maintained a small but constant vigil for Lisa Montgomery outside the entrance to the Federal Correctional Complex.

Bill Breeden, a Unitarian Universalist minister from Bloomington, stood among the life advocates, knowing that he could possibly be inside the death chamber later this week.

Breeden is the spiritual adviser for Corey Johnson, who is set for execution on Thursday.

“I’ve felt for a long time that one of the greatest gifts life has to offer is to die in the presence of someone who cares. I can’t imagine having to go through that by yourself,” Breeden said of execution.

Breeden met Johnson a few weeks ago at the suggestion of fellow Death Row inmate Chad Fulks, who has served 16 years in the Special Confinement Unit awaiting imposition of his death sentence.

Johnson had no spiritual adviser during his 27-plus years on Death Row, Breeden said, but has welcomed the recent discussions and has expressed remorse for the crimes that lead to his death sentence.

For the past 12 years, Breeden has also visited Fulks and seen him grow in faith as a person who recognizes his worth.

“He wasn’t afraid to die, but he was afraid to go to hell, so he asked me to help him get over his fear,” Breeden said.

Fulks is no longer afraid to die, Breeden said, but it doesn’t make the solitary waiting any easier for the now 43-year-old inmate.

“This is hell,” Breeden said. “This place is hell.”

As the death penalty protesters waited throughout the night, gathered on the grass in front of the Dollar General store at Indiana 63 and West Springhill Drive, they followed social media posts from media witnesses covering the execution. Many in the group planned to stay on duty for hours hoping for a stay of execution for Montgomery.

“We don’t encourage big crowds. This is a symbolic thing,” said Abe Bonowitz, co-founder of Death Penalty Action and one of the organizers of peaceful protests outside the prison.

The administration of President Donald Trump resumed federal executions in July after 17-year pause. Ten federal inmates were put to death in 2020.

“Donald Trump has created the atmosphere to abolish the federal death penalty,” Bonowitz said of recent work with congressional offices on proposed legislation.

Montgomery is one of three inmates scheduled to be executed by the Justice Department this week, just days before President-elect Joe Biden takes the oath of office. Biden opposes the death penalty, and his spokesman has said he’ll work to end its use.

On Tuesday, media witnesses for Montgomery’s execution were limited to six, due to COVID-19 precautions, Bureau of Prison officials said, though more media witness requests were received to witness her death by lethal injection than any of the 10 previous executions.

The Tribune-Star’s request to witness Montgomery’s execution was denied by BOP, despite the newspaper’s presence at the 10 prior executions. A Tribune-Star media representative has been approved to witness the 12th and 13th executions later this week.

On Tuesday evening, BOP officials said the Stinnet family had representatives at the prison to witness the execution, but had declined to make a statement to media.

Scheduled for executions later this week are Corey Johnson and Dustin Higgs.

— Michael Tarm of the Associated Press contributed to this report.