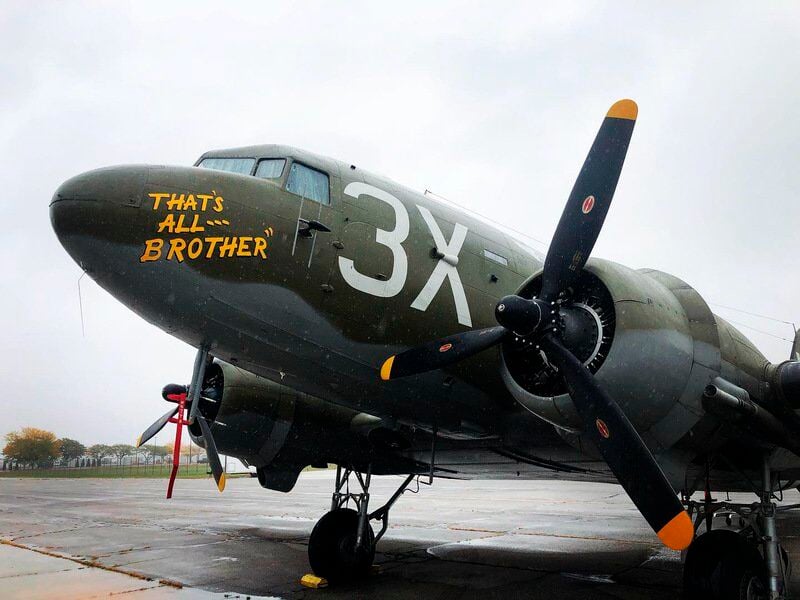 Submitted photo/Hoosier Aviation"That's All Brother" is a C-47 aircraft that transported paratroopers into France during the D-Day invasion on June 6, 1944 during World War II. The aircraft will be in Terre Haute for tours and flights from April 14-18 at Terre Haute Regional Airport. 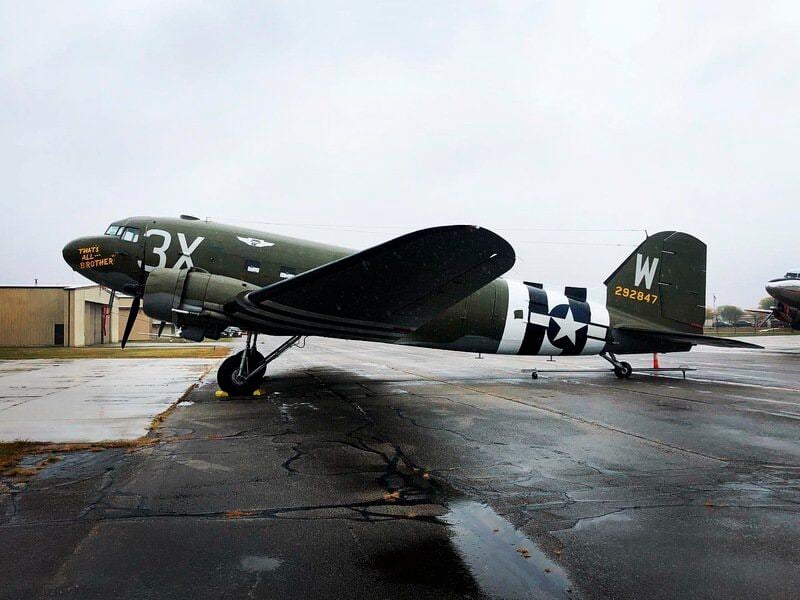 Submitted photo/Hoosier AviationThe exterior of "That's All Brother," a C-47 aircraft of the Commemorative Air Force Central Texas Wing, is painted as it was when it flew into combat transporting paratroopers during D-Day in World War II. The aircraft will be at Terre Haute Regional Airport April 14-18 for ground viewing and for flights.

It begins with a Douglas C-47 Skytrain aircraft that led a formation of 800 other planes carrying about 13,000 paratroopers on D-Day, June 6, 1944, when Allied forces invaded northern France during World War II.

After World War II, the plane was returned to the United States. In 2016, the Commemorative Air Force, a nonprofit educational organization dedicated to preserving, in flyable condition, a complete collection of aircraft flown by all the military in World War II, began restoring the aircraft.

The aircraft, now known as the CAF “That’s All Brother” C-47, will be visiting Terre Haute's airport  April 14 to 18. Ground tours of the aircraft will be $5 per person (ages 7+) and flights available for $249 per person.

As part of the Commemorative Air Force [CAF] Central Texas Wing, That’s All Brother flew with 14 other C-47/DC-3 airplanes to make the epic journey back over the Atlantic in 2019 for a D-Day commemoration event.

"Jordan [Brown] has flown that plane, flying it back from Normandy to the U.S. [after the 2019 event]. And he is a CAF board member, so he got to know the That's All Brother crew," said Josh Thompson, general manager at Hoosier Aviation.

Hoosier Aviation owners Jordan and Nicole Brown also own a restored C-47 aircraft built in 1944. The couple are responsible for attracting many vintage aircraft to the airport. Hoosier Aviation is the company that provides fuel to aircraft at Terre Haute Regional Airport, a service known to pilots as the airport's fixed-based operator (FBO). They bought the FBO in late October 2011.

The That's All Brother C-47's exterior is painted as it was on D-Day and can accommodate up to 16 people for flights ranging from 20 to 30 minutes.

"The way the aircraft is set up, they also restored the inside so that it is authentic to how it was on D-Day, down to the paper cup dispenser," said Leah Block, vice president of marketing for the CAF.

"There are blackout curtains on the windows. It is black fabric and because they flew to D-Day at night, they tried to black out the aircraft. So they had red lights inside the airplane, which is one of the cool things to look out for" when viewing the aircraft, Block said.

"There is a lot of love that went into that aircraft. The seats are on either side of the airplane in the way they would be for paratroopers. It is old school. It is not a comfy flight, but it is authentic," Block said.

The B-29 offers nine flight seats, with each experience lasting about 90 minutes, including 30 minutes of flight as well as a pre-flight history of the plane.

The nine seats and price include the bombardier ($1,500), cockpit/pilot observer ($1,200), navigator ($1,200) and six gunner seats ($600 each). The bombardier, cockpit/pilot observer and navigator seats are in the front of the aircraft, while the six gunner seats are in the rear section of the aircraft. Each seat provides seat-specific views and experiences.

The plane first landed and offered rides in late September in 2020 in Terre Haute.

While still tentative, Thompson said discussions are continuing to bring in the CAF B-25J Mitchell “Maid in the Shade” to the airport the week after the B-29 flight.

The B-25 was a medium bomber built in early 1944. Maid in the Shade is one of 34 B-25Js still flying. Nearly 10,000 of the aircraft were produced, used mainly as a low altitude strafe and skip bomber. The aircraft was used in the United State's first large-scale bombing offensive in the Philippines, sinking eight ships and shooting down five planes.

For more information, visit hoosieraviation.com and scroll down to upcoming events under the home page button.