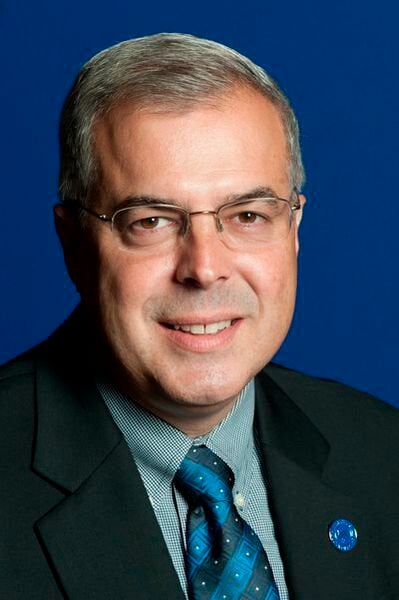 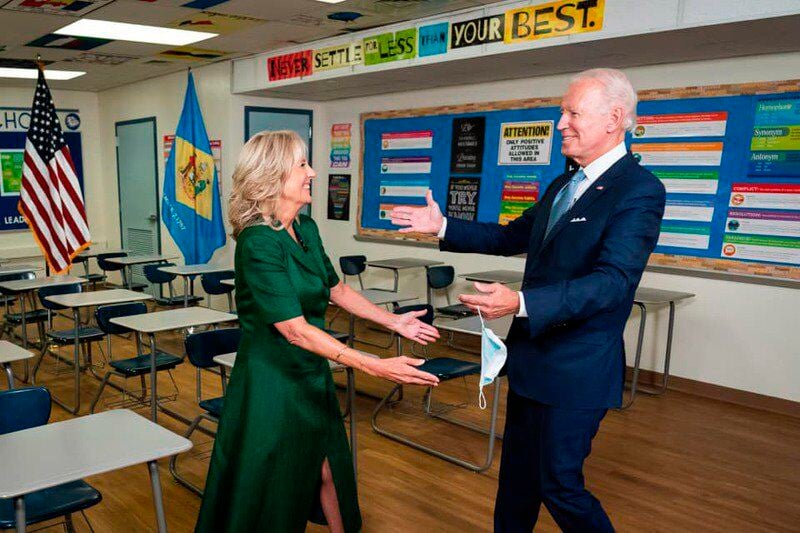 Photo from www.facebook.com/joebidenJoe and Jill Biden on World Teachers' Day, Oct. 5, 2020. Some say public school school teachers may have a new voice inside the next presidential administration as the next first lady, Jill Biden, is a community college faculty member, a former public high school English teacher and a longtime member of the National Education Association. 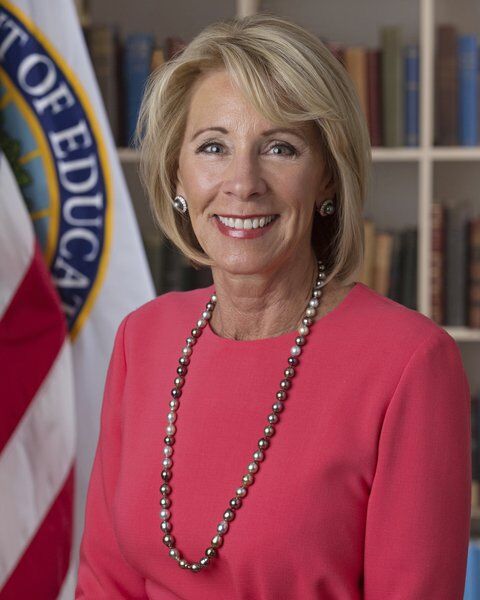 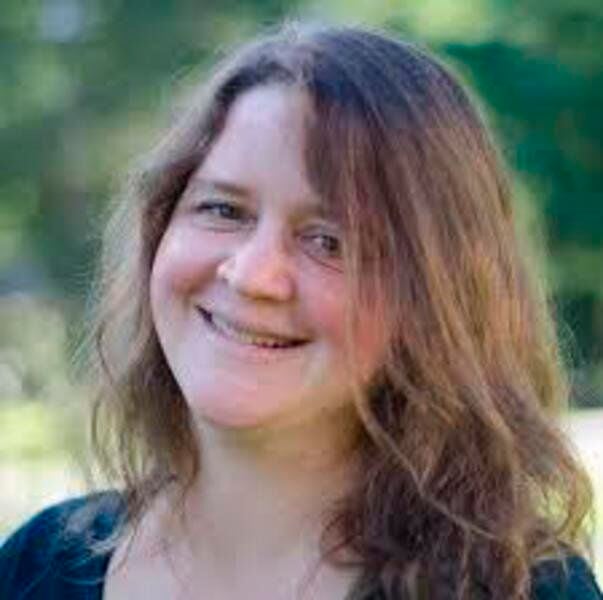 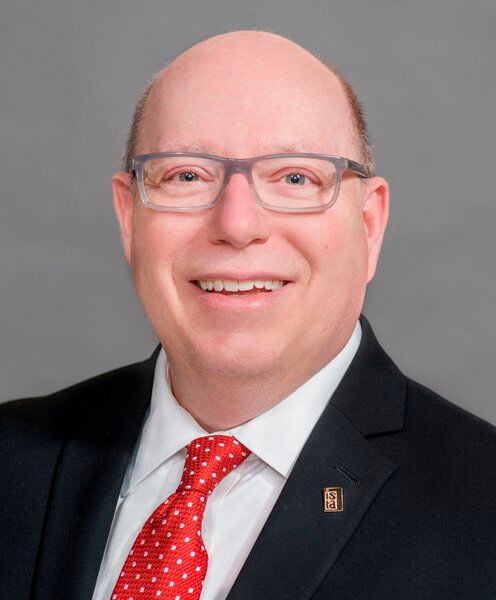 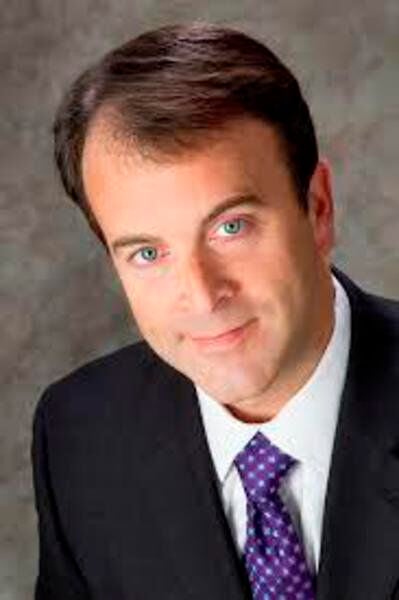 Photo from www.facebook.com/joebidenJoe and Jill Biden on World Teachers' Day, Oct. 5, 2020. Some say public school school teachers may have a new voice inside the next presidential administration as the next first lady, Jill Biden, is a community college faculty member, a former public high school English teacher and a longtime member of the National Education Association.

Those in public education are hopeful that a Joe Biden presidency will mean a new era for public schools and a reversal of trends that have taken place under the current administration.

The Democratic president-elect has pledged more federal funding for public schools and stronger leadership on school re-opening amid COVID-19.

A Biden administration also means a new secretary of education to oversee the U.S. Department of Education.

Betsy DeVos, the current secretary, has been a strong advocate of school choice beyond traditional public schools, with tax dollars following those choices.

Biden has said the new secretary will be an educator, although it’s not known if that person will come from K-12 or higher education.

Among the agencies closely watching will be the Indiana School Boards Association.

“Overall, we would like an administration that celebrates the tremendous efforts to deliver public education that happen every day in our classrooms,” said Terry Spradlin, executive director of the Indiana School Boards Association. “K-12 public education is a key pillar of our democracy and we need a renewed and elevated level of support for public schools and the millions of children we educate.”

ISBA is hopeful that the U.S Department of Education will grant federal testing waivers for the spring semester “due to the extremely abnormal circumstances prompted by the pandemic,” especially with the current surge of COVID cases in Indiana and nationwide, Spradlin said.

ISBA also would like to see the new administration support a new package of economic stimulus and recovery funding, to include $200 billion for K-12 education to support states' efforts to deliver instruction during the pandemic.

Funding is needed to close the “digital divide" that has become so apparent during the pandemic, Spradlin said.

ISBA also would like to see additional funding for IDEA [Individuals with Disabilities Education Act] and special needs programming. “The federal government has never met its commitment to cover 40% of these expenses, and we are hopeful that a significant investment will be made,” Spradlin said.

'Huge win as a whole'

Cathy Fuentes-Rohwer, president of the Indiana Coalition for Public Education is elated by the upcoming changes.

“For public education, this is a huge win as a whole,” she said. “It will be refreshing and important to have a public educator in the role of secretary of education. ... We will all be very glad to say goodbye to Betsy DeVos.”

Even with changes at the federal level, the fight for public education will continue in Indiana, Fuentes-Rohwer said. “Betsy DeVos’ agenda of privatizing public education continues in our state.”

Indiana continues to have Republican super majorities in the Statehouse and it “has not shown any sign of relenting on a continued siphoning away of public funds into private hands through charters, innovation schools and vouchers.”

In addition, she hopes Biden is able to follow through on some of the things he has pledged, including major increases in Title 1 funding.

“We know we have a growing population of children dealing with the effects of poverty in Indiana,” she said. “If we can receive more funding geared toward educating those kids with such high need, that’s going to make a big difference.

Biden also hopes to increase funding for pre-school, “which is so important for outcomes for kids,” Fuentes-Rohwer said.

In addition, Biden has also been critical of for-profit charter schools.

According to FactCheck.org, Biden has indicated he opposes federal

And while Biden opposes vouchers for private school tuition, he does not oppose students choosing between public schools, magnet schools and high-performing charter schools, according to the July FactCheck report.

Brad Balch, professor and dean emeritus at Indiana State University’s Bayh College of Education, says that with the current administration, there has been an increased emphasis on school choice; efforts to reduce federal spending; and an emphasis on delegating more authority to the states.

“We’ve seen efforts to reduce the federal footprint in the business of education,” he said. Under a Biden administration, “I think there will be much less emphasis on choice and competition and much more emphasis on access, equity and inclusiveness,” impacting students in both K-12 and college.

He doesn’t foresee a desire to reduce federal spending and there could be a larger federal footprint. Centralizing federal guidelines in response to COVID provides “a good, healthy example of what a greater footprint would look like,” Balch said.

In addition, “I think we’ll see bigger involvement in day to day operations of both K-12 and higher education and potentially more revenues flowing,” he said.

He also foresees less emphasis on school choice by a Biden administration. Currently, Indiana offers tax credits to those who home school; private school vouchers, in which dollars follow students; and charters.

“This whole push for choice really does come from more of a Republican agenda. That doesn’t mean the Democrat platform doesn’t include choice, and even some competition. It’s just not their greatest priority,” Balch said.

In another change, teacher unions could have newfound influence with the new administration. Joe Biden’s wife, Jill Biden, earned a doctorate and is a community college faculty member, a former public high school English teacher and a longtime member of the National Education Association.

Whereas teacher unions in Indiana have had “heavy influence” in the past, in recent years, policy and legislation began to minimize that power and authority. For example, items that had to be negotiated in the past instead became “discussable” items.

“I think that union voice and the union as a cornerstone of education as a profession, I think that may be invigorated some,” Balch said. “But that remains to be seen.”

Keith Gambill, president of the Indiana State Teachers Association, said the ISTA hopes that President-elect Biden’s secretary of education “is one who will work to help strengthen our public schools, one that removes the failed policies that overemphasize charter schools and privatization and standardized testing.”

ISTA agrees that the new secretary should be someone who has been an educator, “unlike Betsy DeVos, who had not spent any time in schools” as an educator, Gambill said.

DeVos’ replacement “needs to be someone who has come up through education and knows and understands what it means to be in the classroom,” Gambill said.

He’s also hopeful the new administration recognizes that with the pandemic, there should be a waiver from federal testing requirements.

“Now is not the time for us to be spending energy and resources and time on standardized testing,” Gambill said. Students’ education is facing much disruption this year.

The focus needs to be on “really knowing where our students are and working to help bring them forward,” he said.

Once the worst of the pandemic is over, the focus must be on “what do we need to do to work with students who will need to get caught up. That will be very different among students and school to school,” Gambill said.