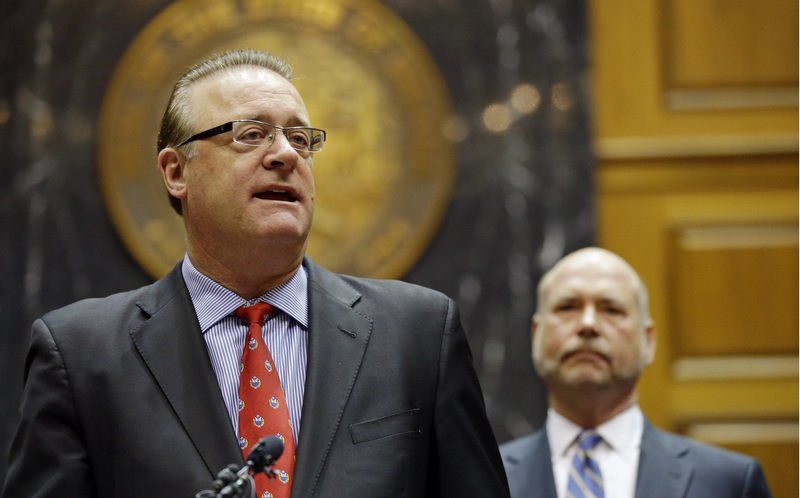 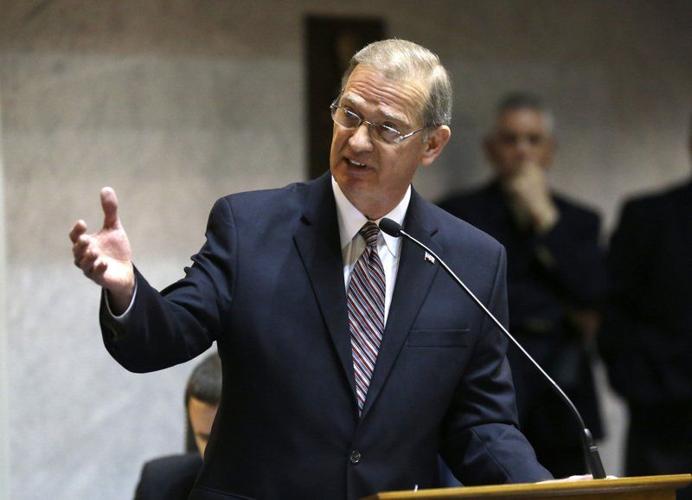 Eric Miller, executive director of Advance America, testifies against changes to the state's new religious-objections law during a conference committee hearing at the Statehouse in Indianapolis on Thursday.

Eric Miller, executive director of Advance America, testifies against changes to the state's new religious-objections law during a conference committee hearing at the Statehouse in Indianapolis on Thursday.

Indiana Gov. Mike Pence urged residents to “move forward together” Thursday after he signed off on revisions to a new religious objections law that had sparked nationwide criticism that it would allow discrimination against gays.

Lawmakers — in the Indiana House of Representatives, led by Speaker Brian Bosma, R-Indianapolis, and in the state Senate, led by President Pro Tem David Long, R-Fort Wayne — and business leaders worked together to craft an amendment that prohibits service providers from using the law as a legal defense for refusing to provide services, goods, facilities or accommodations. It also bars discrimination based on race, color, religion, ancestry, age, national origin, disability, sex, sexual orientation, gender identity or U.S. military service.

After the original law had sparked boycotts of the state amid fears that it would allow discrimination against lesbians and gays, Pence had asked lawmakers to clarify language in the religious objections law earlier this week as businesses canceled conventions and governments banned travel to the state. The House and Senate approved the changes Thursday after intense negotiations with business and community leaders, and Pence signed it late in the day.

The revised legislation prohibits providers from using the law as a legal defense for refusing to provide services, goods, facilities or accommodations. It also bars discrimination based on factors that include race, religion, disability, sexual orientation, gender identity or United States military service.

The law will take effect July 1.

The measure exempts churches and affiliated schools, along with nonprofit religious organizations.

Many groups that had criticized the version of the law signed by Pence hailed the new language. But others said it was worse than the original and could lead to bigger problems.

“There will be some who think this legislation goes too far and some who think it does not go far enough,” Pence acknowledged in a statement after signing the amended legislation. “I believe resolving this controversy and making clear that every person feels welcome and respected in our state is best for Indiana.”

Indiana Chamber of Commerce President and CEO Kevin Brinegar said Indiana “has suffered tremendously” during the past week’s uproar and that the new language is “what businesses and individuals from around the state, country and world needed to hear.”

Indy Chamber President and CEO Michael Huber called the changes “a major step in the right direction in efforts to protect the rights of all Hoosiers.”

“The healing needs to begin right now,” he said.

And NCAA President Mark Emmert said the association was “very pleased” with the changes. The Indianapolis-based NCAA was among the first to express concern about the law when it was passed last week. The Final Four is being held in Indianapolis this weekend, and Emmert said the NCAA would consider moving future events out of state if the law wasn’t revised. (See accompanying story below.)

The women’s Final Four is scheduled to be held in Indianapolis next year.

Opponents of the changes said they didn’t go far enough and could do more harm than good.

Democratic lawmakers called for a repeal of the law Thursday, urging lawmakers to start from scratch.

“I want to hear somebody say, ‘We made a grave mistake, and we caused the state tremendous embarrassment that will take months, if not years, to repair,’” House Minority Leader Scott Pelath said. “I want to hear one of the proponents ‘fess up, because the healing cannot begin until that happens.”

Consumer reporting agency Angie’s List, which announced it was putting a planned $40 million expansion on hold over the law, also called for a repeal.

“Employers in most of the state of Indiana can fire a person simply for being lesbian, gay, bisexual, transgender or questioning. That’s just not right and that’s the real issue here. Our employees deserve to live, work and travel with open accommodations in any part of the state,” said CEO Bill Oesterle.

Micah Clark of the American Family Association of Indiana said the Legislature’s actions didn’t clarify the law as Pence had requested but instead changed it in “a way that could now erode religious freedom across Indiana.”

“If this revised law does not adequately protect religious liberty for all, it is not really a religious freedom act,” Clark said.

Mark Rienzi, senior counsel of the Becket Fund for Religious Liberty in Washington, D.C., said the new language “carves up religious rights” and that the state would be better off if it adopted the language in the 1993 federal Religious Freedom Restoration Act.

Many groups said the changes are a good first step but urged lawmakers to do more, including adding protections for sexual orientation and gender identity to the state’s civil-rights law.

The American Civil Liberties Union said the changes have lessened the harm of the law but that “significant problems” still need to be addressed, including whether the law can be used to deny rights to others, including in education and access to health care.

The group’s state affiliate noted that the amendment marks the first time that Indiana law has included positive references to sexual orientation and gender identity. But it said statewide civil-rights protections are still needed.

But she said that without statewide anti-discrimination laws for the LGBT community, “discrimination is still legal” in most of Indiana.

Meanwhile in Arkansas, lawmakers in Little Rock voted 76-17 to adopt a revised bill after Republican Gov. Asa Hutchinson asked for changes in the wake of mounting criticism. Hutchinson signed it only moments after the vote, saying the new version recognizes that “we have a diverse workforce and a diverse culture.”

The Arkansas measure is similar to a bill sent to the governor earlier this week, but Hutchinson said he wanted it revised to more closely mirror a 1993 federal law.

The lawmaker behind the original Arkansas proposal backed the changes, saying he believed the law would still protect religious beliefs.

“We’re going to allow a person to believe what they want to believe without the state coming in and burdening that unless they’ve got a good reason to do so,” Republican Rep. Bob Ballinger told the House Judiciary Committee.

Like Pence in Indiana, Hutchinson in Arkansas faced pressure from the state’s largest employers, including retail giant Wal-Mart. Businesses said the bill would hurt Arkansas’ image. Hutchinson noted that his own son had signed a petition urging him to veto the bill.

After Hutchinson signed the compromise bill, the House voted to recall the original proposal from his desk. Conservative groups said they would have preferred Hutchinson sign the first bill, but they grudgingly backed the revamped measure.

“The bill that’s on the governor’s desk is the Rolls Royce of religious freedom bills. It is a very good bill,” said Jerry Cox, head of the Arkansas Family Council. “The bill that just passed ... is a Cadillac.”

The revised Arkansas measure addresses only actions by the government, not by businesses or individuals. Supporters said that would prevent businesses from using it to deny services to individuals. Opponents said they believed the measure still needs explicit anti-discrimination language.

The original bill “gave us a black eye. This bill ices it,” said Rita Sklar, executive director of the American Civil Liberties Union of Arkansas. “We still need some Tylenol.”

The Human Rights Campaign, the nation’s largest lesbian, gay, bisexual and transgender rights group, called the new law an improvement but said it could still be used be used to discriminate based on sexual orientation.

The revised bill also faced opposition from Republicans frustrated over the governor’s request for changes to a proposal he had initially planned to sign.

“I, for one, do not appreciate someone hiding behind this body when they’re unwilling to take a stand one way or the other,” Republican Rep. Josh Miller of Heber Springs said.

Similar proposals have been introduced this year in more than a dozen states, patterned after the federal Religious Freedom Restoration Act of 1993, with some differences. Twenty-one states now have comparable laws on the books, including Indiana and Arkansas.

The backlash gave pause to lawmakers in other states considering their own religious freedom proposals.

A divisive bill in Georgia stalled Thursday as the end of the 2015 session approached. Atlanta-based Coca-Cola warned lawmakers against approving “any legislation that discriminates.”

In North Carolina, the House speaker said deliberations over a bill would be slowed to give lawmakers time to determine if the legislation would harm the state’s economy.

A proposed amendment to the Texas Constitution would prohibit the government or any other entity from imposing burdens on religious freedom, potentially opening the door for businesses to refuse to serve gay people on religious grounds.