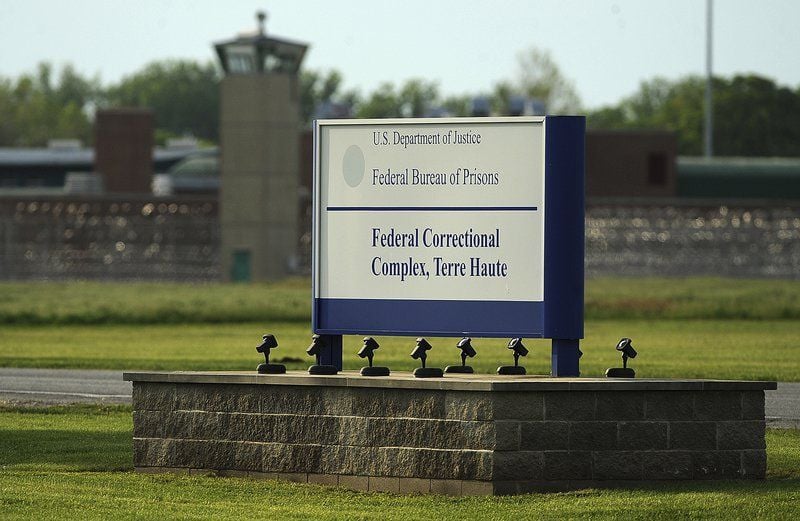 Cases of COVID-19 at the Federal Correctional Complex in Terre Haute have increased dramatically in recent weeks and have spread to include death row inmates scheduled for execution.

As of Tuesday afternoon, the United States Penitentiary at Terre Haute had the highest number of COVID-19 cases in the federal prison system with 281 inmates testing positive, according to federal Bureau of Prisons website. That was an increase over the 252 reported in the previous daily update.

An additional 51 inmates and 22 staff members were reported as testing positive at the adjacent medium-security prison on the federal prison property.

Currently, the Federal Correctional Institute in Pekin, Illinois, has the second-most inmates positive at 262.

Attorneys and representatives of death row inmates including Corey Johnson and Dustin John Higgs — both set for execution in January before President Donald Trump leaves office — have said those men have tested COVID-19 positive.

As many as 14 of the 50 inmates on Death Row have been reported as COVID-19 positive, according to a New York Times report.

The Tribune-Star requested information from the Bureau of Prisons twice on Tuesday about the COVID-19 outbreak at the Terre Haute facilities. As of 4:30 p.m. Tuesday, no response had been received.

“From talking to clients and other lawyers, I have heard that it is at least 28 guys,” Cohen told the Tribune-Star.

“They are both quite sick and both have underlying health conditions that put them at risk,” Cohen said. The BOP is not accurately reporting on the conditions of inmates, as most are not “asymptomatic,” she said.

Cohen said Holder told her no doctor has visited since the outbreak began, but a nurse has come through daily to check temperatures, and sometimes to check blood oxygen levels.

Ten death row inmates have been executed since July. A Bureau of Prisons spokesperson at the recent execution of Alfred Bourgeois on Dec. 11 said at that time no inmates on death row were positive for COVID-19.

By the following week, however, that had changed as both Johnson and Higgs had positive test results.

As of Monday, the BOP was reporting 252 inmate cases in the maximum security penitentiary. Four staff members were also reported positive for coronavirus.

At the adjacent Federal Correctional Institute — a medium security prison with an adjacent minimum security satellite camp — 49 inmates were reported COVID-19 positive, with 22 staff positives. The BOP reported 386 inmates and 51 staff as recovered from COVID-19.

The penitentiary houses 1,239 inmates, according to the BOP website, while the FCI houses 848 inmates, and the adjacent work camp houses 165.

According to the BOP website, which is updated daily with COVID-19 information, the bureau has 124,247 federal inmates in BOP-managed institutions and 13,831 in community-based facilities. The BOP staff complement is about 36,000.

Editor's note: This story was updated with additional reporting at 5:15 p.m. Tuesday, Dec. 22.