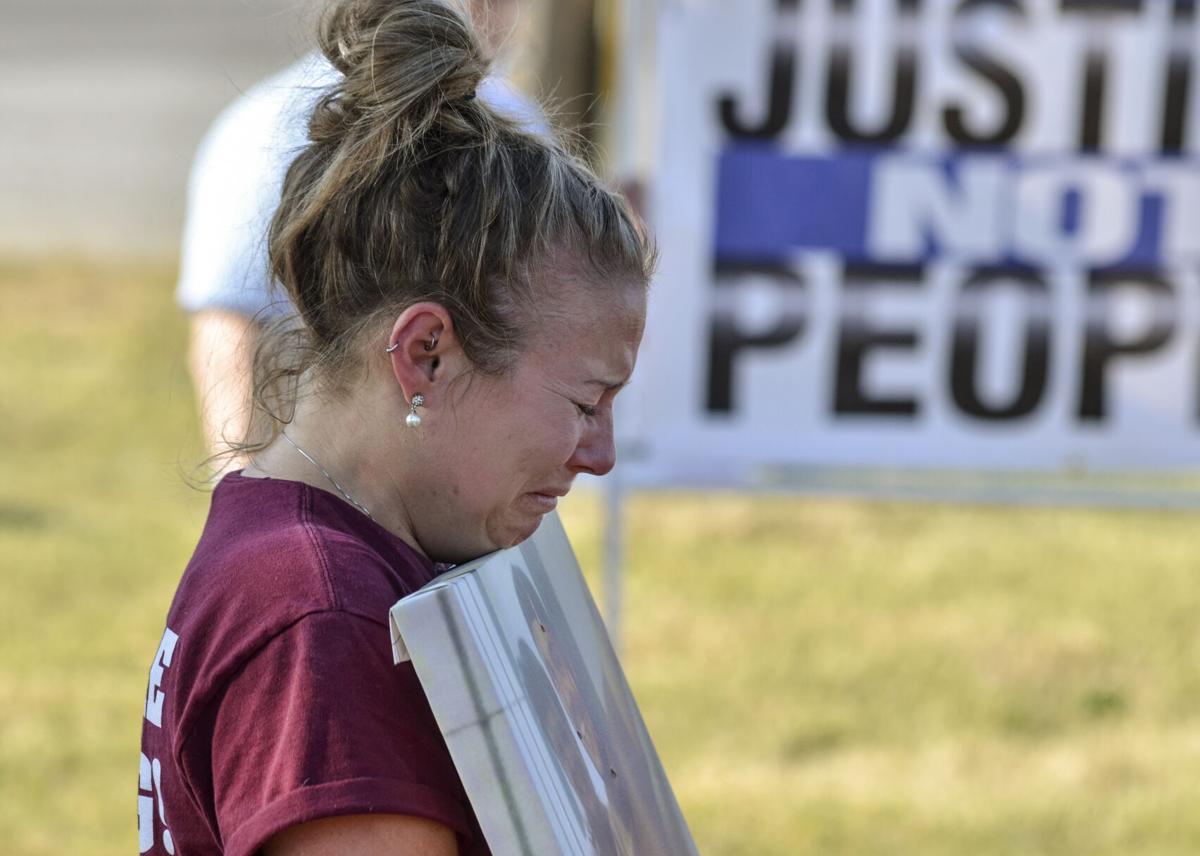 Tribune-Star/Austen Leake Advocating change: Anti death penalty activist Ashley Kincaid’s tears roll down a pciture of Christopher Andre Vialva at the protest across the street from the federal penitentiary on Thursday evening during Vialva’s exectuion. 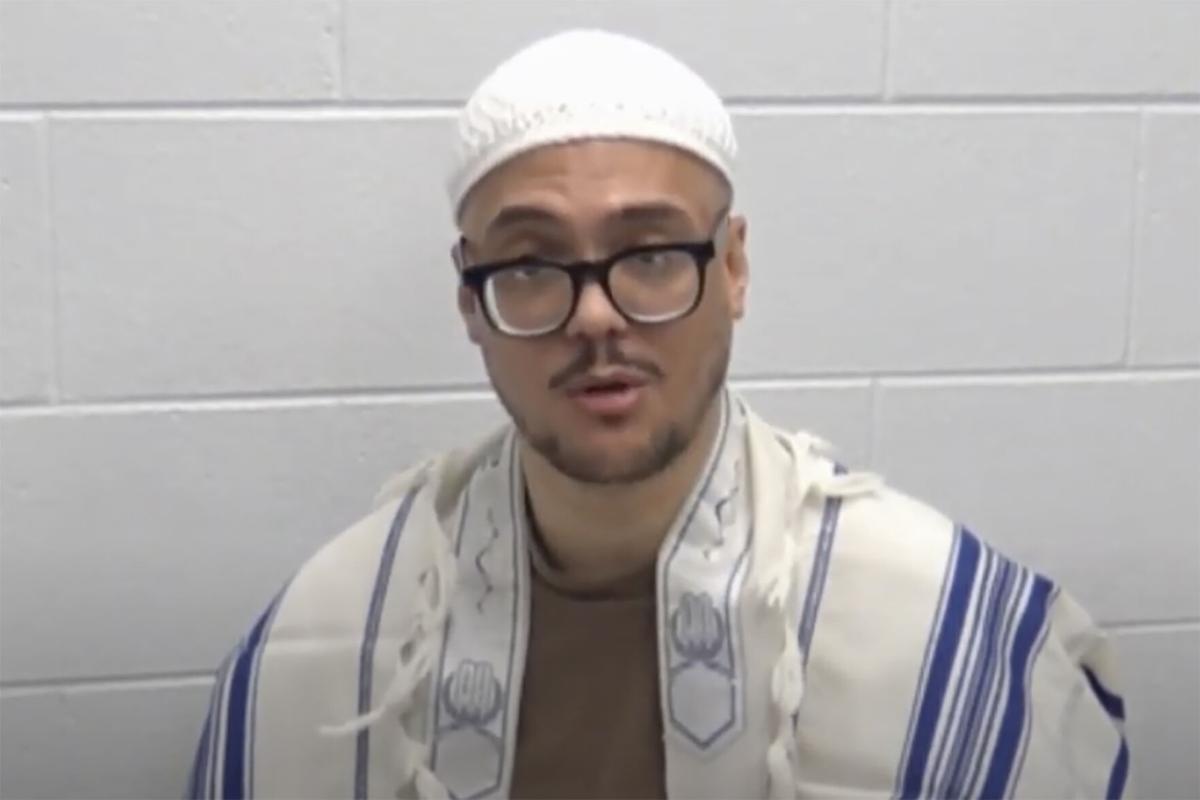 This undated image taken from video provided by attorney Susan Otto shows Christopher Vialva in the federal prison complex in Terre Haute. He was executed Thursday. 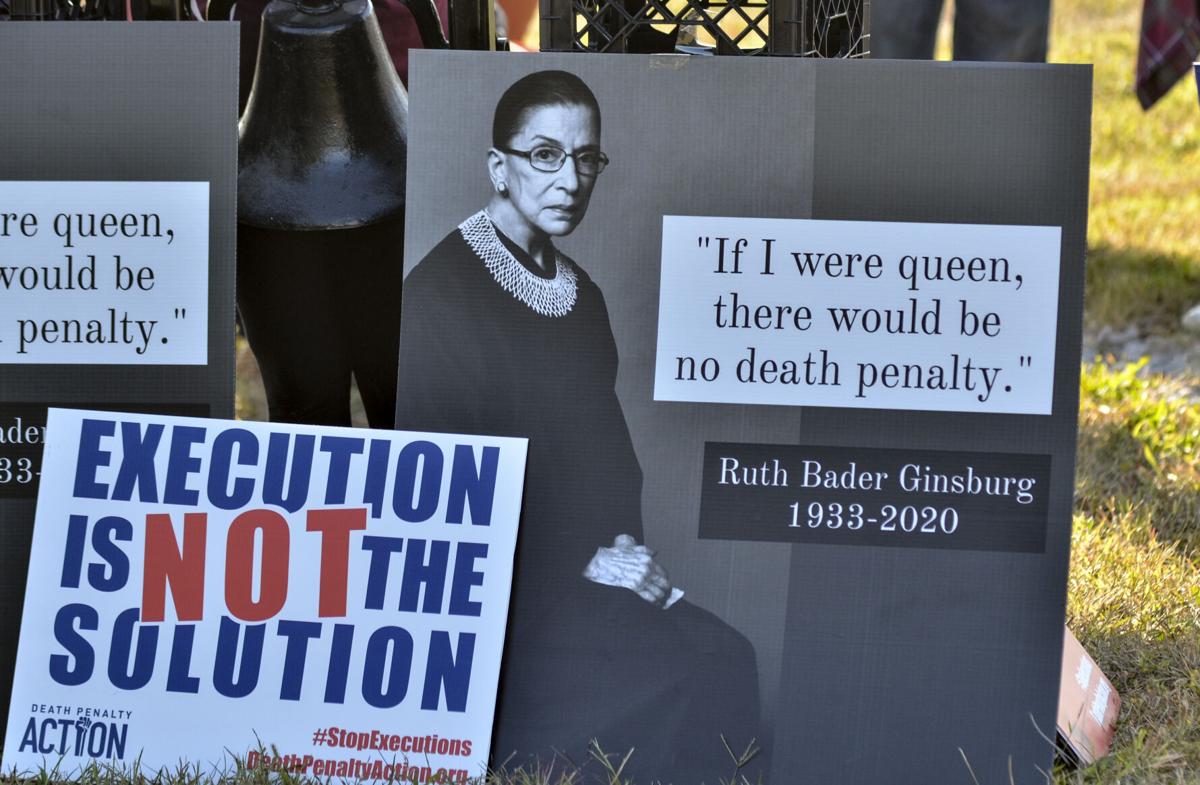 Tribune-Star/Austen Leake Still relevant: A sign noting the oppostion to the death penalty by the late Supreme Court Justice Ruth Bader Ginsburg was on display at the protest against execution of Christopher Andre Vialva on Thursday. 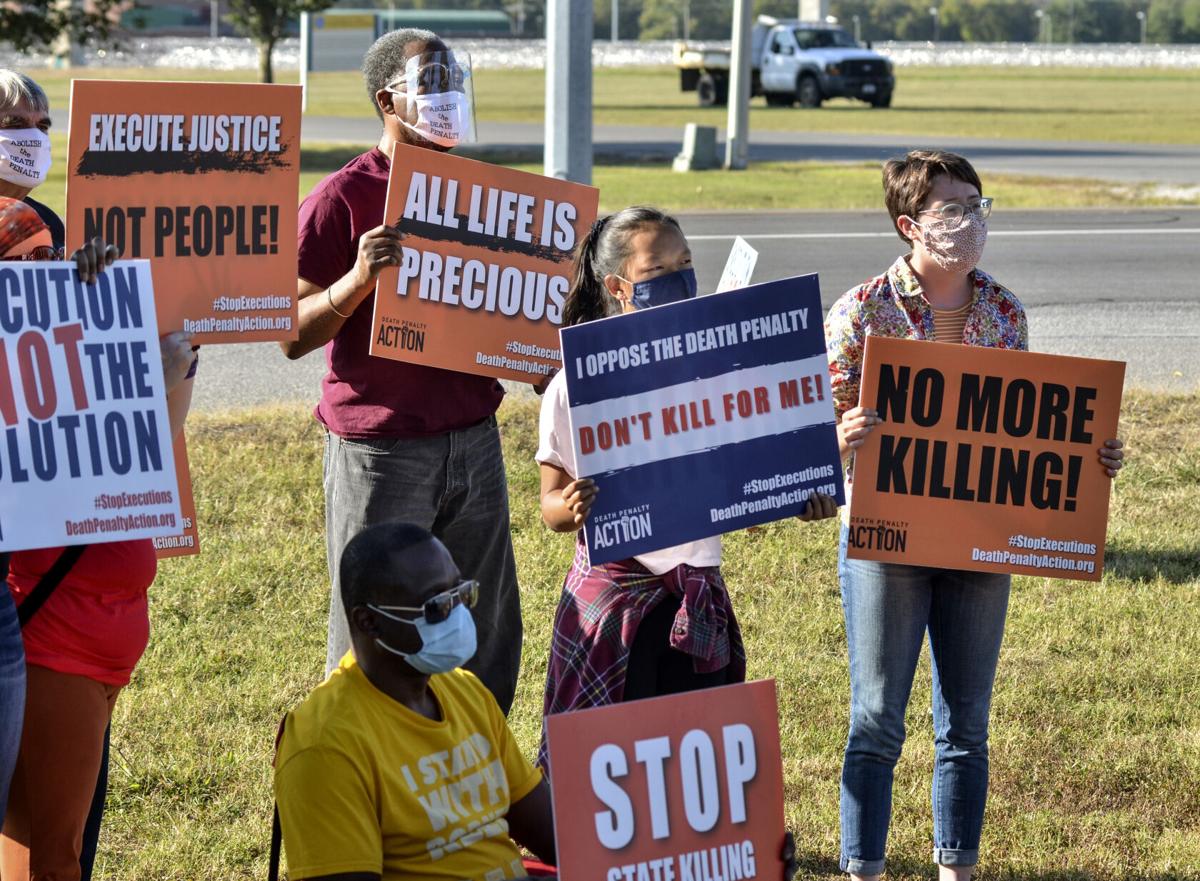 Tribune-Star/Austen Leake Voicing their opinion: Around 30 protesters took part in the demonstation across the street from the federal penitentiary on Thursday evening while the execution of Christopher Andre Vialva was being carried out. 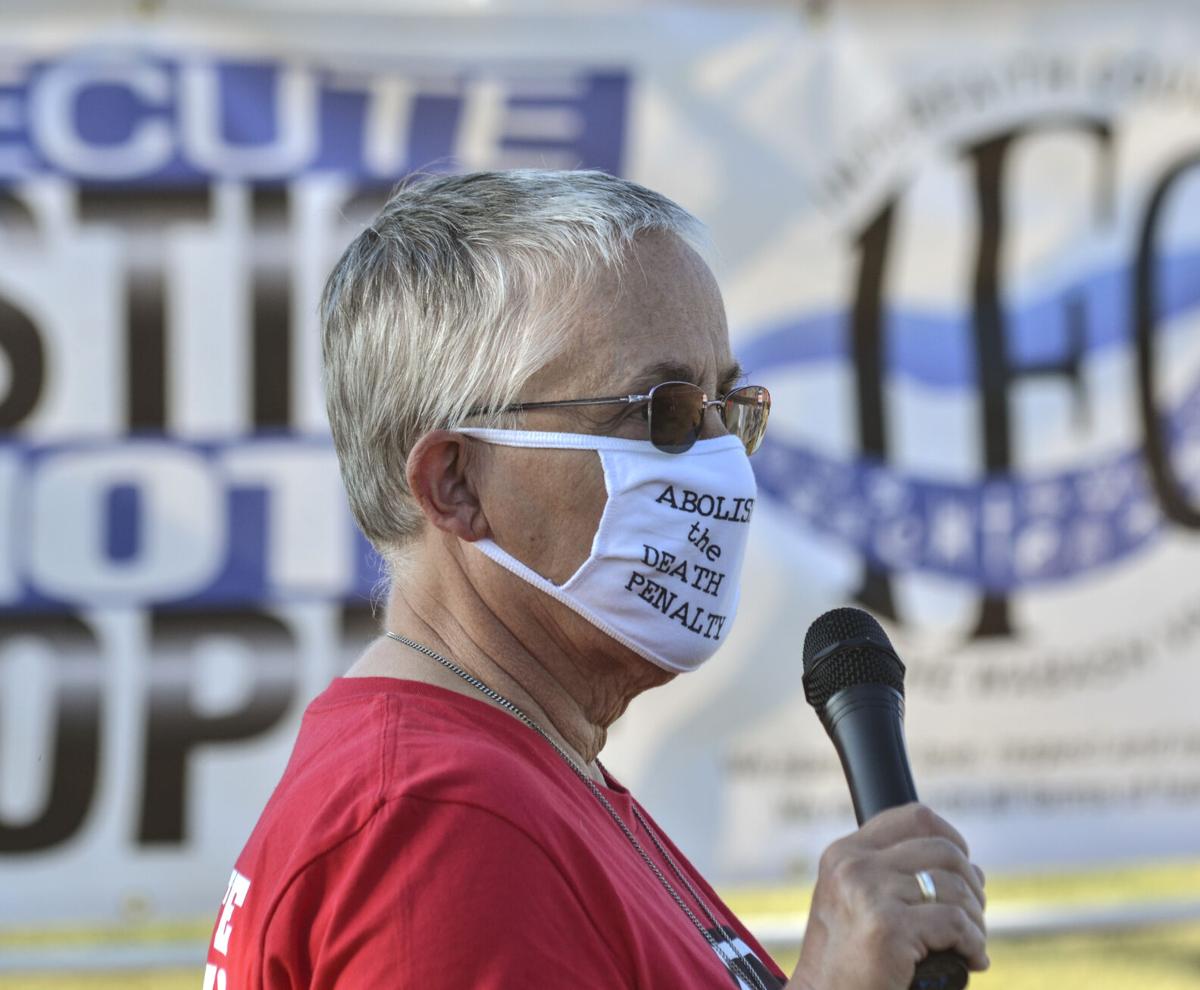 Tribune-Star/Austen Leake Speaking out: Sister Barbara Battista speaks at the protest across the street from the federal penitentiary on Thursday evening during the execution of Christopher Andre Vialva. 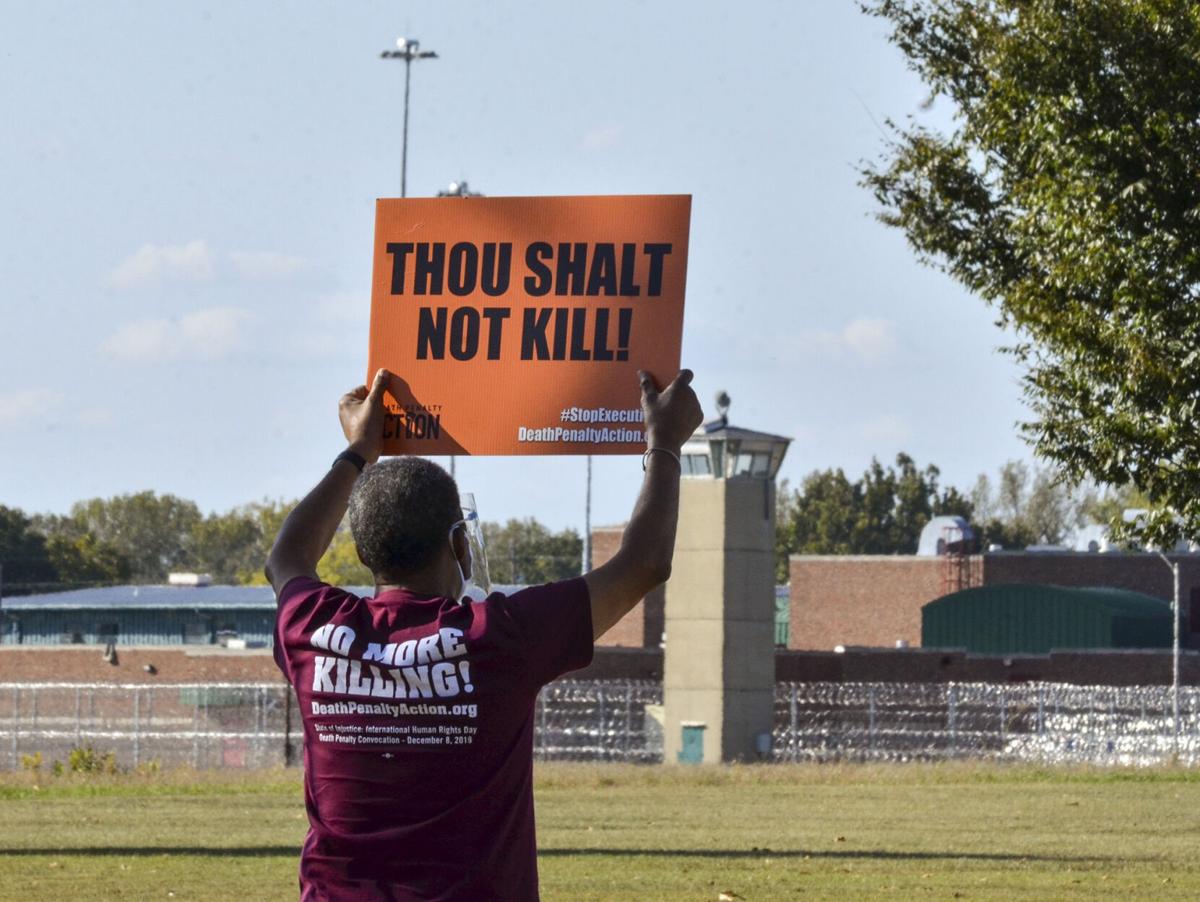 Tribune-Star/Austen Leake Thou shalt not kill: Sylvester Edwards holds up a sign opposing the death penalty across the street from the federal penitentiary on Thursday evening during the execution of Christopher Andre Vialva.

Tribune-Star/Austen Leake Advocating change: Anti death penalty activist Ashley Kincaid’s tears roll down a pciture of Christopher Andre Vialva at the protest across the street from the federal penitentiary on Thursday evening during Vialva’s exectuion.

Tribune-Star/Austen Leake Speaking out: Sister Barbara Battista speaks at the protest across the street from the federal penitentiary on Thursday evening during the execution of Christopher Andre Vialva.

Tribune-Star/Austen Leake Thou shalt not kill: Sylvester Edwards holds up a sign opposing the death penalty across the street from the federal penitentiary on Thursday evening during the execution of Christopher Andre Vialva.

Christopher Andre Vialva on Thursday became the seventh person this year to die of lethal injection at the Federal Correctional Complex in Terre Haute after a 17-year hiatus on federal executions.

“I am ready, father” were Vialva’s final words following a brief statement in which he said he prayed the hearts of his victim’s family be filled with grace and shalom, or peace.

Vialva’s death was announced at 6:46 p.m. about 33 minutes after the execution began at the prison complex.

Vialva, 40, wore black-rimmed glasses as he looked to his left toward his spiritual advisor. Vialva, now a messianic Jew, was the first African-American on federal death row to be executed this year.

A statement from the victim’s family was presented to journalists following the execution.

The statement recalled the events of the evening when Christian youth ministers Todd and Stacie Bagley gave a ride to Vialva and his friends, but were carjacked and killed.

“Vialva now says he has turned his life around and has influenced other lives since then, but Todd and Stacie have also influenced many lives,” said the statement by Todd Bagley’s mother Georgia.

“They were willing to lay down their lives to try and win their kidnappers to the Lord by quoting scripture, praying, and singing praises to God before they died. We will never know how many people they could have influenced for good if they had been given the chance.”

Vialva was convicted in June 2000 in the murder of the Iowa couple at Fort Hood, Texas. The Bagleys were visiting Killeen, Texas, for church revival meetings.

The jury found that Vialva, who was 19 at the time, was guilty of carjacking a vehicle, shooting the two occupants, then burning them inside the vehicle. Three other youths with Vialva participated in the crime spree. The Bagleys were kept in the trunk of their car for seven hours before being shot in the head.

Todd Bagley died instantly, but Stacie Bagley died of smoke inhalation after their car was set on fire.

Vialva was convicted in the U.S. District Court for the Western District of Texas on charges of carjacking and two counts of first degree murder on a government reservation, aiding and abetting. Those charges brought the death sentence.

Vialva was also convicted by the jury for conspiracy to commit murder, for which he was sentenced to life without the possibility of release. He served 21 years and 2 months in prison awaiting execution.

In her statement, Georgia Bagley said Vialva’s mother has had the opportunity to visit her son in prison for 21 years, but the Bagley family has had to wait for 21 years for closure.

Vialva’s mother Lisa Brown was at the prison for the execution. Earlier Thursday, she said her son is not the person he was in 1999 when the killings occurred, and he regrets his actions involving the couple.

Inside the execution chamber, arms outstretched. An intravenous line ran to his right arm and left hand.

Vialva appeared nervous as the curtains rose on the witness windows. His feet twitched and he rubbed his right fingers together as he lay on the gurney with

Vialva looked from the ceiling to the left lower corner of the room where his spiritual advisor stood near a witness window. As the execution proceeded, he repeatedly moved his tongue around inside his mouth and lips. Then his mouth opened to breath and his eyes slowly glazed.

A person with a stethoscope entered the execution room about 6:45 p.m. and checked for a pulse in Vialva’s right wrist, then appeared to check around his chest.

Outside the prison property along Indiana 63, more than three dozen protestors gathered in opposition to the federal executions.

Several of the demonstrators have been present for the recent federal executions of Daniel Lewis Lee on July 14, Wesley Ira Purkey on July 16, Dustin Lee Honken on July 17, Lezmond Chalres Mithcell on Aug. 26, Keith Dwayne Nelson on Aug. 28, and William Emmett LeCroy Jr. on Sept. 22.

No additional executions had been ordered by the U.S. Department of Justice or scheduled by the Bureau of Prisons as of Thursday evening.