A Logansport High School graduate was one of the 13 U.S. service members killed in the deadly suicide bombing at the Kabul airport on Thursday.

Corporal Humberto Sanchez, 22, was stationed in Afghanistan and aiding the withdrawal at the airport when a suicide bomber carried a heavier-than-usual load of about 25 pounds of explosives, loaded with shrapnel, into the departure zone. At least 169 Afghans were also killed in the blast.

The Pentagon said Friday that there was just one suicide bomber — at the airport gate — not two, as U.S. officials initially said.

“Like many, I have been heartbroken over the recent loss of the 13 U.S. service members who were murdered in the terrorist attacks against our evacuation efforts in Kabul, Afghanistan,” Logansport Mayor Chris Martin said in a statement on Facebook. “Even more heartbreaking is learning the news today that one of those killed was from right here at home in Logansport, Indiana.

“This young man had not yet even turned 30 and still had his entire life ahead of him. Any plans he may have had for his post-military life were given in sacrifice due to the heart he exhibited in putting himself into harm’s way to safeguard the lives of others.”

"We are forever indebted to the service men and women who risk it all to protect others. We will never forget the names of those who paid the ultimate sacrifice," Logansport Community School Corporation said in a Facebook post. "Our deepest condolences are with the Sanchez Family and the entire Cass County community."

Logansport High School Principal Matt Jones tweeted: "Tough day, Berry Nation- Been thinking a lot about 2017 Logansport Berry and Marine Humberto Sanchez and his family. Thank you for serving our country in uniform and sacrifice."

Thursday’s bombing — blamed on Afghanistan’s offshoot of the Islamic State group, an enemy of both the Taliban and the West — marked one of the most lethal attacks the country has seen. The U.S. said it was the deadliest day for American forces in Afghanistan since 2011.

Details on the American dead — 11 Marines, a Navy sailor and an Army soldier — began to emerge Friday ahead of the Pentagon’s release of their names. They included a young Marine and expectant father from Wyoming who was on his first tour of duty in Afghanistan.

“We will respond with force and precision at our time, at the place of our choosing,” President Joe Biden said on Thursday night. “These ISIS terrorists will not win. We will rescue the Americans; we will get our Afghan allies out, and our mission will go on. America will not be intimidated.”

In Washington, U.S. commanders briefed Biden on developing plans to strike back at the Islamic State and make good on the president’s vow to the attackers to “hunt you down and make you pay.”

Biden pronounced the U.S. effort to evacuate Americans, Afghan allies and others most at risk from the Taliban a “worthy mission.”

“And we will complete the mission,” he said.

The U.N. Security Council called the targeting of fleeing civilians and those trying to help them “especially abhorrent.”

The Taliban have wrested back control of Afghanistan two decades after they were ousted in a U.S.-led invasion following the 9/11 attacks. Their return to power has terrified many Afghans, who have rushed to flee the country ahead of the American withdrawal.

More than 100,000 people have been safely evacuated through the Kabul airport, according to the U.S., but thousands more are struggling to leave in one of history’s biggest airlifts.

The White House said Friday afternoon that U.S. military aircraft had flown out 2,100 evacuees in the previous 24 hours. Another 2,100 people left on other coalition flights.

The number was a fraction of the 12,700 people carried out by U.S. military aircraft one day early in the week, when the now two-week-old airlift not only met but exceeded intended capacity for a couple days.

More European allies and other nations were ending their airlifts on Friday, in part to give the U.S. time to wrap up its own operations. 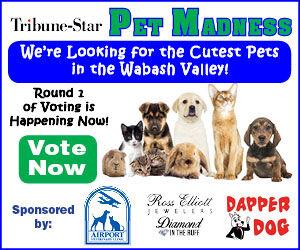 James Joseph Priester: Interment of cremains 10:00 a.m. Saturday, October 16, 2021, at Calvary Cemetery. All are welcome. A gathering will follow at the family home to honor Jim, a man who touched the lives of many.

BLOOMINGTON, Ill. [mdash] Virginia Rehmel Liston, age 98 of Bloomington, IL, formerly of Terre Haute, IN passed away at 8:35 PM on Sunday, March 28, 2021 at Heritage Health, Bloomington IL. A private family memorial service was held April 1, 2021. A private inurnment will be held at Westland…