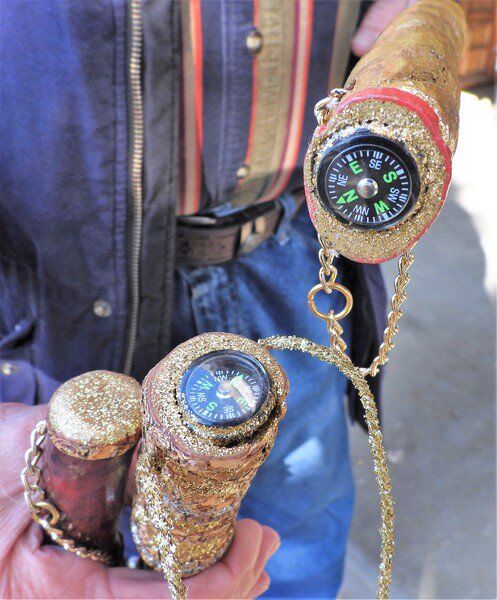 Tribune-Star/Mark BennettHandy: When he’s not writing poetry, Joe Shell often hand carves walking canes for friends, using sassafras wood. He’s made nearly 300 canes. Each is unique. Some feature a compass in the handle. 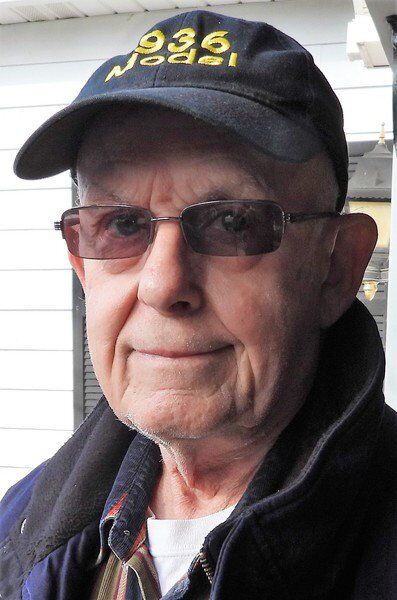 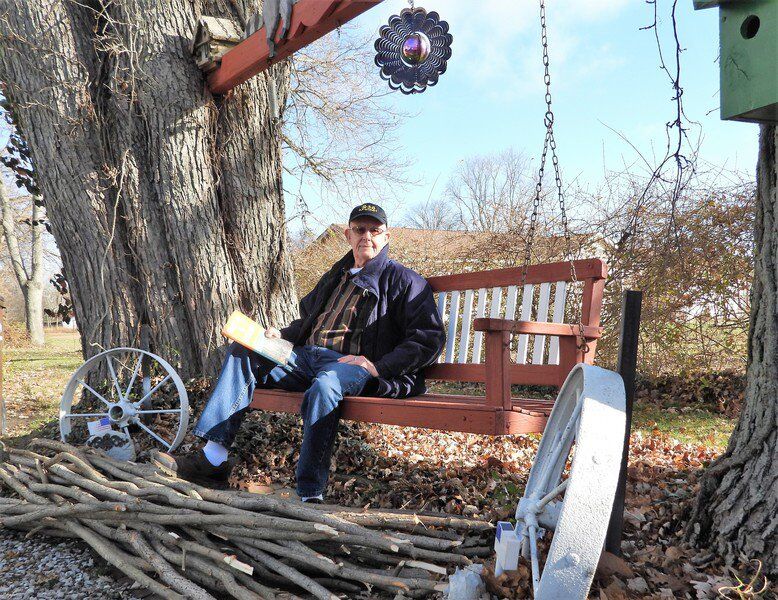 Tribune-Star/Mark BennettPoet: Vermillion County retiree Joe Shell put 34 of his “true life” poems into a new book, “Itchin’ an’ a Scratchin’: Livin’ Back in the ‘40s, ‘50s and ‘60s and Other Stuff.”

Tribune-Star/Mark BennettHandy: When he’s not writing poetry, Joe Shell often hand carves walking canes for friends, using sassafras wood. He’s made nearly 300 canes. Each is unique. Some feature a compass in the handle.

Tribune-Star/Mark BennettPoet: Vermillion County retiree Joe Shell put 34 of his “true life” poems into a new book, “Itchin’ an’ a Scratchin’: Livin’ Back in the ‘40s, ‘50s and ‘60s and Other Stuff.”

Joe Shell emerged from the back door of his rural Vermillion County home with a handful of walking canes tucked under his arm.

One of Shell’s pastimes is carving sassafras limbs into snazzy canes. He equips some with a compass, embedded in the tip of the handle. Moving in the right direction is especially important to Shell. He’s 84 years old and a retired carpenter, but “I don’t sit and not do anything,” he said. “I’ve got to be doing something.”

Since retiring, he’s painted vivid, spectacular scenes of creeks and woodlands, handcrafted canes, hiked Indiana’s state parks with his wife of 35 years, Martha, hunted Native American artifacts and stones, and stayed active in his Christian faith and home church. Shell added one more avocation a few years ago. He wrote a series of 34 poems, chronicling his youth, from boyhood to being a young father of four, and life along the Wabash River.

“I do not claim to be an accomplished poet or author,” Shell said. “I just put down memories from my growin’ up years, things that are so special in my heart and mind.”

His folksy poems recall a range of topics, from old friends, the Wabash’s ills (floods) and virtues (fishing), family road trips out West, his grandparents Newt and Hattie, hunting mushrooms and raccoons, a “celebrity friend,” and more.

It’s essentially his life in rhymes.

“I’d like to record it for posterity,” Shell said last week, sitting in a lawn chair inside his garage. “These young people don’t have a clue about how things used to be.”

Shell even captures a milk separator in verse, for the uninitiated, young or old.

“That separator was hand crankin’, took muscle power to turn,

‘Lectric one later, 'twas easier, got cream for Mom’s butter to churn.”

The son of a farming couple, Jack and Marie Shell, Joe and two sisters grew up in Newport in northern Vermillion County in a peculiarly named place called Opeedee. As Shell’s poem, “Opeedee and Me,” explains, the place’s moniker comes from the initials of one of its most prominent native sons, Oliver P. Davis, or O.P.D. Davis was a 19th-century lawyer and landowner, who owned the local railroad station, a member of Indiana’s Constitutional Convention in 1850 and, get this, served in the state Legislature as a Republican, then a Democrat, and then a third-party member. A state historical recount labels Davis “a free-thinker.”

Unlike Davis, Shell grew up during the Great Depression and World War II years in more humble circumstances, “abject poverty,” as Shell put it. “We didn’t know it. But a lot of people had that.”

His resourceful father always managed to keep the family fed and sheltered. That knack provided the title of Shell’s new book.

“Dad could do anything. If the river took the road out, he’d figure out a way to get to town,” Shell recalled. "We were itchin’ to go fishing, mushrooming and going to visit family. And he was always scratchin’ his head and saying, ‘How am I going to feed the family?’”

Shell’s teenage years contained a moment that fueled his foray into poetry. His literature teacher at Newport High School, Rachel Milligan, assigned the students to write a theme paper about their lives. In his theme, Shell described putting out trot lines with his dad on the Wabash.

“The next day, she read it to the class,” Shell said, grinning. “She gave me an A.” He wound up being valedictorian of his 14-member class. Shell attended Purdue University for a semester, and was overwhelmed by its size, then did a year at Indiana State Teachers College in Terre Haute, only to discover “I didn’t want to be a teacher. So, I quit and went to work.”

His jobs involved an ability to build things, as a draftsman, lumberyard worker and a carpenter, in addition to six years in the military with the National Guard and U.S. Army Reserves. Several of Shell’s working years were spent alongside his father. “We did everything from wallpapering to ditch digging and building fences,” Shell said. “It was a paycheck every week.”

Through eight decades of memories, he feels “so blessed, because I’ve known so many people,” Shell said.

“We’re in this ole world together, all different yet the same, we must-a bein’ and doin’ our small part here in life’s earthly game, promotin’ peace in our circle of friends, must be a keepin’ this in mind, every mornin’ we’re all puttin’ on our pants just one leg at a time.”