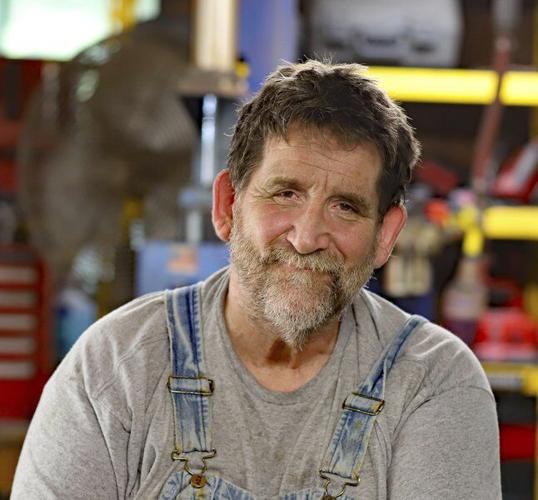 Mike LunsfordPortrait of an Artist: John Bennett, artist and blacksmith, in his “suburban Jessup” workshop. 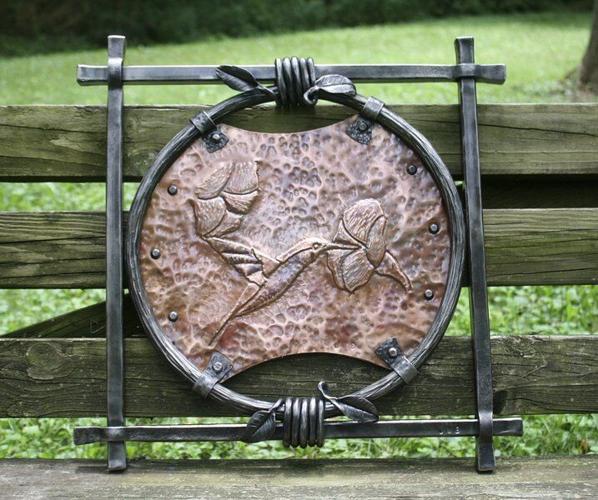 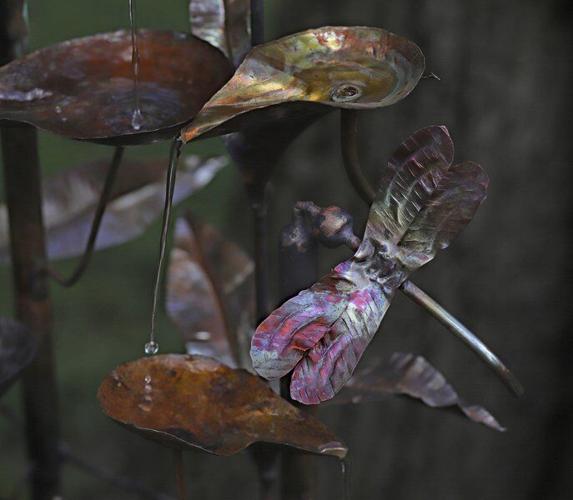 Mike LunsfordThe Sound of Water: A close-up of a copper fountain John Bennett has made shows the intricate patterns of falling water. 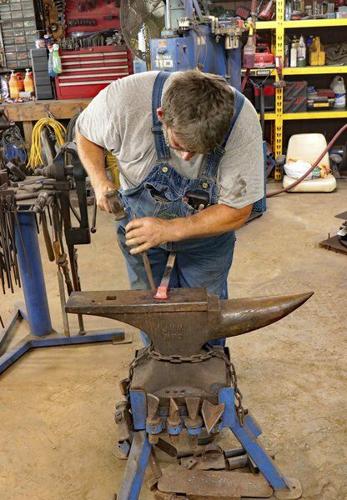 Mike LunsfordMaking Art: John Bennett hammers a piece of steel into art on his 150-pound anvil. 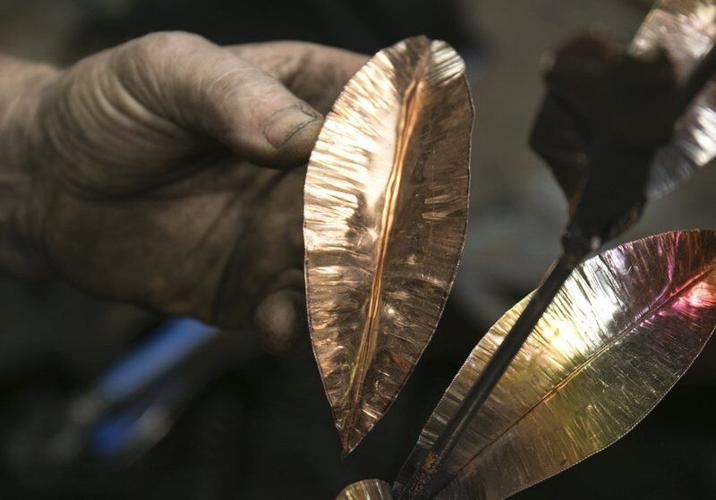 Mike LunsfordHands of an Artist: John Bennett holds just a few of the copper leaves he will add to his new fountain. 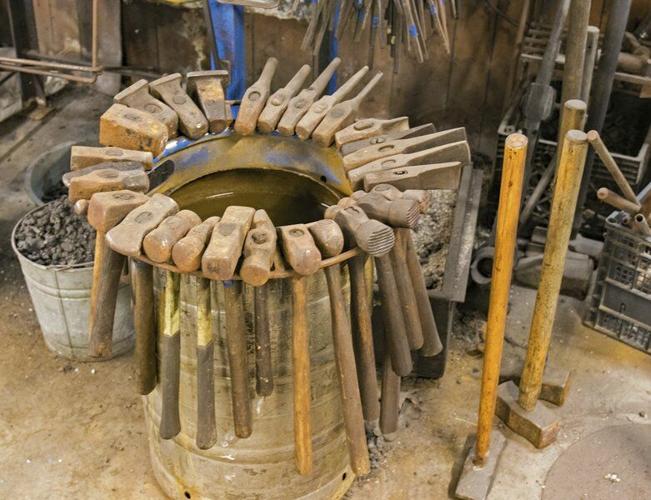 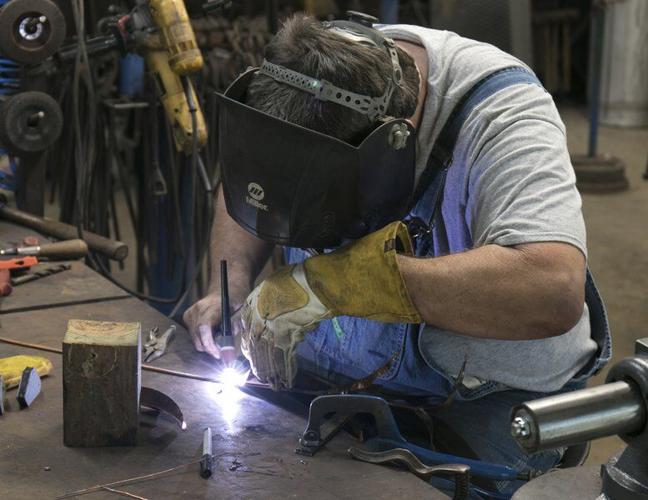 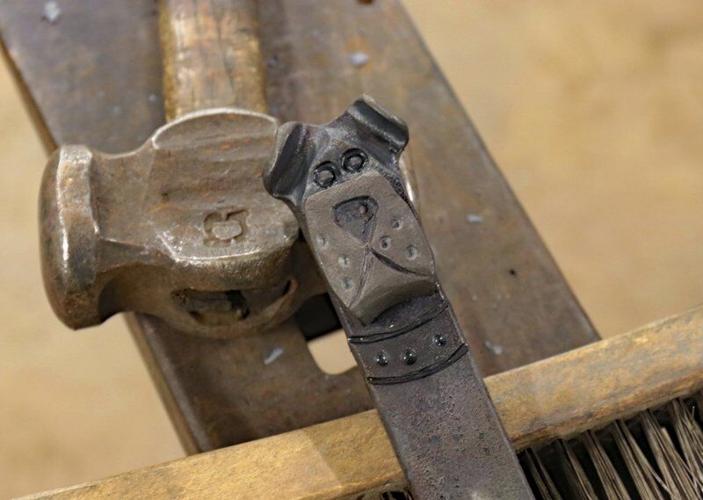 Mike Lunsford15-Minute Bulldog: The result of 15 minutes of work, a piece of steel resembling a bulldog will be finished into a coat hook or bottle opener. 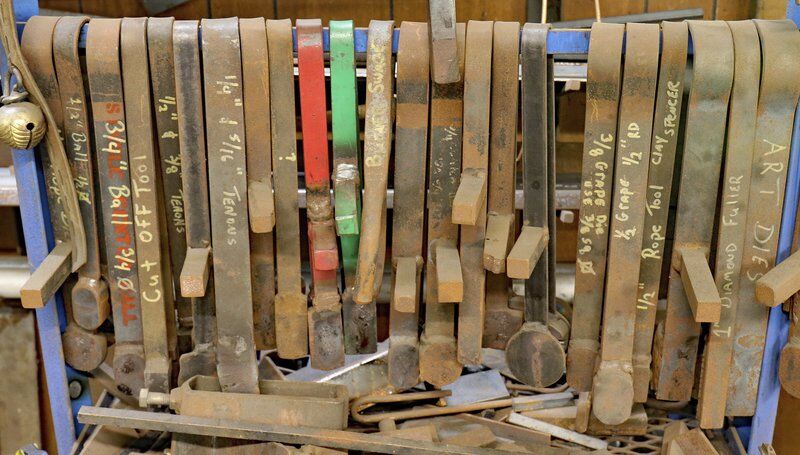 Mike LunsfordTools of the Trade: Assorted power hammer tools await use on one of John Bennett’s projects. 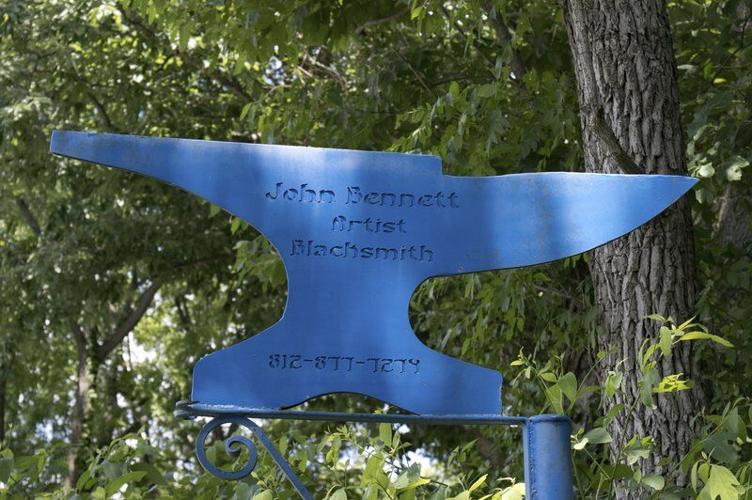 Mike LunsfordPortrait of an Artist: John Bennett, artist and blacksmith, in his “suburban Jessup” workshop.

Mike LunsfordThe Sound of Water: A close-up of a copper fountain John Bennett has made shows the intricate patterns of falling water.

John Bennett’s workplace sits a few miles north of Rosedale, just off a washboard-rough West Jessup Road, marked by a blue anvil-shaped sign that reads: “Artist Blacksmith.” As I neared his winding, tree-lined drive on a hot July day, I shook a trio of crows loose from a nearby locust tree and later wondered if they had been there just to enjoy his music.

Bennett, 63, lives simply, works hard, and sees things in ways that most others don’t, at least, not anymore. “I have a two-room cabin and an indoor bathroom, and living here and doing what I’m doing is going to be good enough until they put me in a box,” he told me not long after I toured his open and sun-warmed shop, located in a converted garage near his small hillside home.

Even though Bennett was expecting me that afternoon, he was already so caught up in his work — and his stereo was blaring Lynard Skynyrd so loudly — that I had to rap my knuckles on his workbench to pull his attention away from the intricate welds he was making on copper leaves for a fountain he was just days away from finishing.

Wearing bibbed overalls and with a pair of reading glasses perched on his head, Bennett walked me past a litany of hammers, chisels and punches, a 150-pound anvil (his pride and joy), racks of handmade patterns and homemade specialty tools, his smoldering coal-fired forge and bellows, a smaller gas-fueled forge, and a pair of big pneumatic forging hammers, that upon demonstration, made me wonder just how he had any hearing left. Neatly and efficiently, Bennett maintains stacks of raw materials — steel, copper, cast iron, bronze — and in virtually every available space of his work area, shelves of brushes, wire, grinders, torches and other tools of the trade are within an arm’s reach. Talkative and wry, he is obviously enthused about his craft.

“I grew up around folks who fixed things instead of scrapping them out and buying new,” Bennett told me. “If they could make it instead of buying it, then they made it. I always thought everyone was that way. It wasn’t until a few years ago that I realized not everybody had, or wanted, the skill sets to do that.”

A 1977 graduate of nearby Rosedale High School, Bennett grew up in Lyford, and although classwork held little appeal for him, he never shut the door on learning. “When I was a kid, there was a man by the name of Kenny Allen who lived on the hill above our house. I spent a lot of time in his shop bugging him. He ran a little fix-it place out of his garage, and as I grew older, I would help him. I guess that set everything in motion. My dad was a welder and my grandfather on my mother’s side was a diesel mechanic, so I grew up in a mechanical environment,” he said.

“Only three subjects in school really appealed to me,” Bennett added. “They were my industrial arts classes, art and an astronomy class. I was lucky to be in that last class because it was only offered for one year. It was taught by James Kerr, and he would really bust your chops, but I liked that class — something in astronomy appealed to me.”

Upon graduating, he worked as a mechanic, finished concrete, labored with high-pressure piping and picked up on electronics, knowledge he used in a local factory. He didn’t, however, have the “stomach for letting people go when I was told to, so I quit.” His interests in blacksmithing, and eventually, the arts, came as he was making a living doing those other things.

“I attended the ‘Feast of the Hunter’s Moon’ in Lafayette back in the mid-to- late 90s and watched the ring of blacksmiths work for several hours, and I thought, ‘I can do that.’ On the way home that day I stopped at an antique store in Covington and bought a 111-pound Peter Wright anvil. I’ve been at it ever since. I enjoy traditional work, but I find natural art forms like trees, flowers and leaves to be my main interest now.”

Mostly self-taught, Bennett is quick to say that his attendance at blacksmithing conferences and “hammer-ins,” and, particularly, watching others demonstrate their techniques, have increased his ‘learning curve’ considerably. “Just hanging out with a few of my peers has been very beneficial to me,” he said, while adding that his growing collection of books covering blacksmithing, coppersmithing, and woodworking includes volumes that date from the late 19th century.

Still committed to making a living, but even more dedicated to seeing where his artistic interests take him, Bennett has lived quite a life: a Marine Corps veteran, thrice married with one son, two grandchildren, and two great-grandchildren, he spends what spare time he has riding his motorcycle, paddling his kayak, or sitting a few feet from his shop with his feet propped near a fire ring. Hardly a recluse, he encourages visitors to his workspace, although besides his workbench stool, you’ll only find a single chair in his shop.

“I strive to do quality work whether it is a commissioned art piece or a repair,” Bennett said. “I would say that a third of my work is repair, like welding and straightening, and modifications. That pays the bills.” He did point out to me, however, that he has little interest in the big repair jobs he used to tackle. “If it doesn’t fit on that,” he said, pointing to the big vise-laden work table where I found him that day, “then I’m not much interested in it anymore.”

Bennett does not display his work widely. Other than places like Shoe’s Ridge Bar, The Ranch restaurant, the 36 Saloon, and Britton Winery, where his metalwork has been put to practical use, he sells and shows his designs at Off the Square Artisans in Rockville. “Time is the lion’s share of the final cost,” he says. “A solid design, quality work, and attention to detail takes time. My focus is slowly shifting to copper work, though. I really enjoy the contrast between copper and black iron. They both have different and unique characteristics that challenge my abilities.”

As he stoked his coal forge, Bennett lopped off a yardstick’s worth of steel from his stock and heated it to a glowing red. Hammering away, then re-heating, and hammering again, he spoke about the expectations people have of blacksmiths: “There seems to be a misconception that blacksmithing takes a lot of strength and is mainly a craft for men. Attention to detail and a desire to learn the basics will take a person a lot farther than brute strength. There are many highly skilled women in blacksmithing these days doing a wide array of work in steel, copper, brass and bronze.” As he banged out a rhythm, he also told me that he worked with his coal forge and steel and hammer during demonstrations because that is “what people expect to see and hear.”

Within 15 minutes, Bennett produced a metal bulldog that would soon be turned into a coat hook or bottle opener, but admits, “A man can make only so many s-hooks before he’d want to put his eyes out.”

John truly loves what he does, but also says that blacksmithing, and even his artistic pieces are hard work. “I’ve had people tell me what I’m sure they’ve heard: ‘It’s not work if it is something you love.’ Well, come over here and spend the day and see if it isn’t work. Some artists will tell you that they don’t care what other people think of what they do, but I don’t think that’s true. You have to learn this craft; you don’t get good at this quickly,” he said.

A few days after my visit, Bennett posted photos on social media of his completed fountain; he was particularly happy with how he’d manipulated the piece’s plumbing and the intricate balance of the water’s flow. “There is something about taking a cold lifeless piece of iron or copper and turning it into something beautiful, something with life and a purpose,” he said.

That afternoon, as is common for him, Bennett also posted that the fountain was his latest “gift to the metal gods from suburban Jessup.”

And, I imagine the crows were back; he was playing Eric Clapton…

You can contact the writer at hickory913@gmail.com; his website is at www.mikelunsford.com. Mike’s books are available on Amazon and at a number of Wabash Valley stores. John Bennett will be teaching an intermediate blacksmithing class at Fowler Park in Vigo County on August 20; for more information, contact him at johnbennett1959@gmail.com.