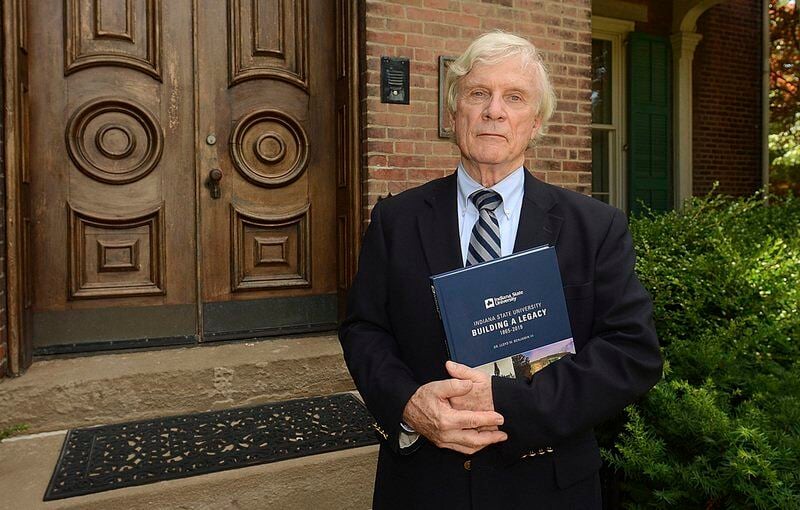 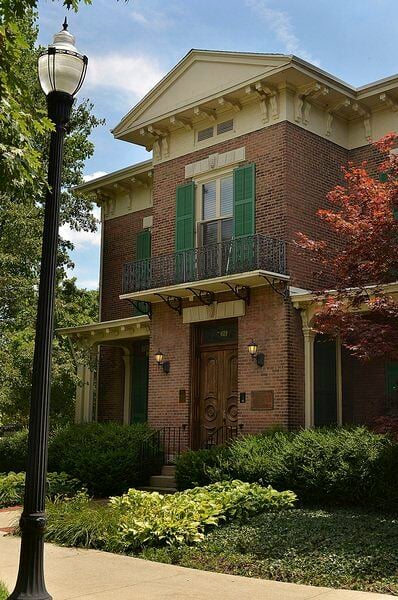 Tribune-Star/Joseph C. GarzaBuilt in 1860: Condit House was built in 1860 by Jabez Hedden and Alan Carson Rankin was the first Indiana State University president to reside in the building after its renovation in 1967. 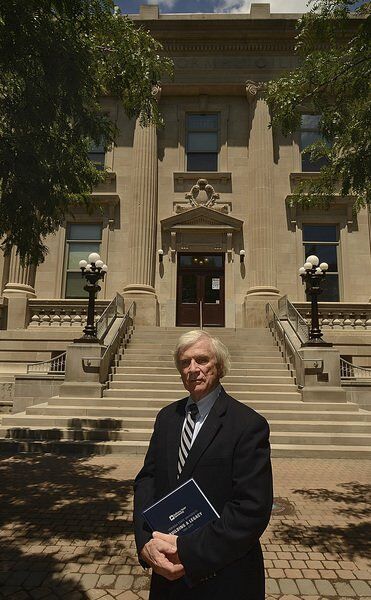 Tribune-Star/Joseph C. GarzaHandsome history: Former Indiana State University President Lloyd Benjamin describes Normal Hall (Library) as “decidedly one of the most handsome buildings on the campus” in his new book, “Building A Legacy.” Here, Benjamin stands in front of Normal Hall on July 14 on the ISU campus. 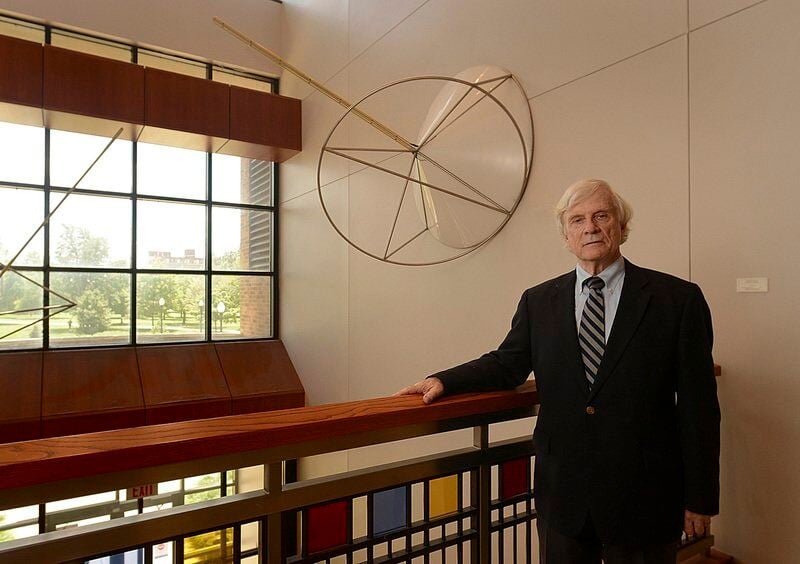 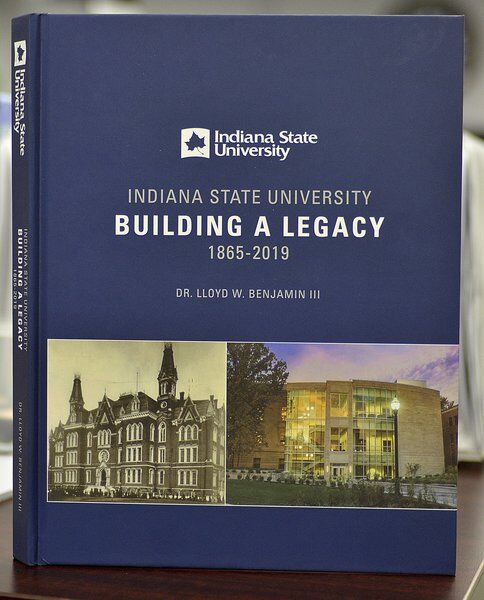 Tribune-Star/Joseph C. GarzaBuilt in 1860: Condit House was built in 1860 by Jabez Hedden and Alan Carson Rankin was the first Indiana State University president to reside in the building after its renovation in 1967.

Tribune-Star/Joseph C. GarzaHandsome history: Former Indiana State University President Lloyd Benjamin describes Normal Hall (Library) as “decidedly one of the most handsome buildings on the campus” in his new book, “Building A Legacy.” Here, Benjamin stands in front of Normal Hall on July 14 on the ISU campus.

The view tells a story of a college and its hometown.

That's why Lloyd Benjamin considers the Quadrangle as his favorite spot among the 200 acres and 72 buildings that make up the Indiana State University campus.

A person standing at its center can pivot to see the campus' oldest buildings, refurbished Normal Hall (circa 1910) on the north end and Condit House (1860) to the south. On the northeast side stands Tirey Hall, once the student union, and Tilson Auditorium, home to countless concerts and cultural events. To the northwest, the present Hulman Memorial Student Union typically serves as a hub of activity, food and events, with the circular fountain flowing outside. Also within eyesight are renovated learning centers like Stalker Hall, the Fine Arts Building, Dreiser Hall and the Advanced Technology Center, among others.

"In a microcosm, you have the history and the heart of the campus," Benjamin said in an interview earlier this month.

Benjamin grew to know that scenic greenspace, with its criss-crossing sidewalks and stately structures, as ISU's president from 2000 to 2008. Benjamin learned the backstories of the full campus in the years following that term, as he researched the history of the university, functioning in the 21st century with nearly 15,000 students, faculty and staff. He sliced that history into the tenures of ISU's first 11 presidents and the structures developed in those time spans. It resulted in his new book, "Building a Legacy: Indiana State University, 1865-2019."

Its colorful 293 pages present pieces of not only the university's lifespan, but also its relationship with the surrounding Terre Haute community.

In his time as ISU's president, Benjamin saw the present campus through the additions and deletions, goals and choices of his predecessors. He terms ISU today as "an artifact — the physical manifestation of the dedication, intelligence, political astuteness and leadership qualities of previous presidents."

The presidencies covered stretch from the first, William Jones from 1869 to 1879, all the way to Dan Bradley, from 2008 to 2017. The 12th and current president, Deborah Curtis, penned the foreward to Benjamin's book.

The people of Terre Haute play a large role in the story, too.

Benjamin has continued to teach art since leaving the presidency 12 years ago and traditionally starts each semester's classes with a question for his students. He asks them, "Do you know why you're here — physically, why you're here at Indiana State University in Terre Haute, Indiana?" Then he tells the story of the university's humble start in 1865.

Indiana's General Assembly passed legislation that year to launch a "normal school" to prepare teachers to teach the "normal" curriculum to Hoosier kids. The law promised to put the school in a town willing to provide the land and $50,000 in money to match the state's investment. Only Terre Haute bid for that opportunity, Benjamin discovered in his research. Other cities, according to Benjamin's book, were thwarted by "divisiveness over funding public education."

"I began to see that the citizens of Terre Haute did something really extraordinary in their history," he said.

With the city's outlay, Indiana State Normal School was built on the north edge of downtown Terre Haute. The cornerstone, laid in 1867, contained a petition urging the City Council to endorse the planned college. Fifteen-hundred Hauteans — about 15% of the total population — signed the petition.

Twelve years later, the college's original building burned. With no insurance, the city's residents agreed, again, to pay another $50,000 to rebuild Indiana State. That amount is equivalent to $1.4 million in 2020 value.

"I just find that extraordinary," Benjamin said. That discovery inspired him to continue researching and to write the book.

The book, as Curtis writes in her foreward, "provides a wealth of information on our facilities throughout our 150-year history and includes issues, challenges and opportunities faced by each of the first 11 presidents."

The creation of Hulman Center stands as an intriguing example. "Hulman Center, as I've studied it, is a complex problem," Benjamin said of the multi-purpose arena that opened on Dec. 14, 1973, two years after its groundbreaking.

Plans for such a facility, for both civic and university purposes, actually began in 1962. Fundraising difficulties pushed that effort to the end of the late 1960s and early '70s under ISU President Alan Rankin. A $2.5-million gift from an anonymous donor, presumed to be philanthropist businessman Tony Hulman, was the seed for an expected $8-million, 12,000-seat, banquet seating for up to 1,400 guests, and 80-foot-tall arena with "large exterior columns," Benjamin writes in the book.

The concept also involved closing portions of Eighth and Mulberry streets, drawing opposition from the adjacent Masonic Temple and 2,046 citizens filing a remonstrance. Plus, its projected cost grew to $12 million. Rankin told the ISU Board of Trustees that fundraising efforts would continue and that architects would work to reduce the cost.

Thus, when work began on Hulman Center in 1971, its scaled-down design called for a $10-million, 10,000-seat arena, standing 72 feet tall and fitting within the existing city blocks, avoiding the controversial street closings.

That didn't end the bumpy process. ISU students' fees had to be raised twice that school year to cover the debt service to finance the center, and their food services options got reduced as a cost-cutting measure. And, the discovery of an oil well and rail tracks to the old Interurban line on the work site added another $43,000 to the project.

Forty-seven years later, Hulman Center is months away from the completion of a $50-million renovation and a ceremony to rededicate the structure. That project included its share of complexities, too, including the pervasive coronavirus pandemic. It spans two ISU presidencies, from Bradley to Curtis.

"Building a Legacy" details other Sycamore structures and their complications and grand successes. It describes the campus as an evolving network of changing architectural tastes, enrollment-based decisions and community considerations. The addition of some buildings involved the demolition of others. Some were simply razed after outliving their original needs. Tragedy claimed others, including the fire that destroyed the Women's Gym on North Seventh Street. The end result includes some community joys, disagreements and utility.

"In terms of a university campus, ISU can be pleased with what it has right now," said Tommy Kleckner, director of Indiana Landmarks' western office in Terre Haute. "I just hope that more attention is given to historic buildings."

ISU succeeded in preserving Terre Haute's old Federal Building as its renovated Federal Hall, home of the university's Scott College of Business, the old Lab School that's become the Bayh College of Education. Those are preservation efforts that "Indiana State and Terre Haute can really be proud of," Kleckner said.

Benjamin, now 75, sees not only a fascinating history behind the campus' new, old and retro-fitted facilities, but a cohesion to those elements. Upon becoming its president, "you begin to look at the campus and begin to feel a relationship with the other presidents," he said.

"Good people spent a significant part of their lives to work on something they believe in, and not just for themselves, but for others," Benjamin explained. "And when you wander the campus, what you're looking at are containers and museums."

He traces that path of presidents Jones, Brown, Parsons, Hines, Tirey, Holmstedt, Rankin, Landini, Moore, Benjamin himself, Bradley and now Curtis. Each added to, or revised, the plans of their predecessors. Architects, especially Ewing Miller — credited with designing 27 of ISU's structures — mattered, too.

As a result, Indiana State has gone from being a Normal School to a Teachers College to a full-fledged university.

Former ISU president Lloyd Benjamin's "Building a Legacy" serves as a stewardship gift for the university and copies aren't available for public purchase, said Teresa Exline, chief of staff in the Office of the President. Copies will be distributed, though, to the Vigo County Public Library, Cunningham Memorial Library and the Vigo County Historical Museum's History Center.