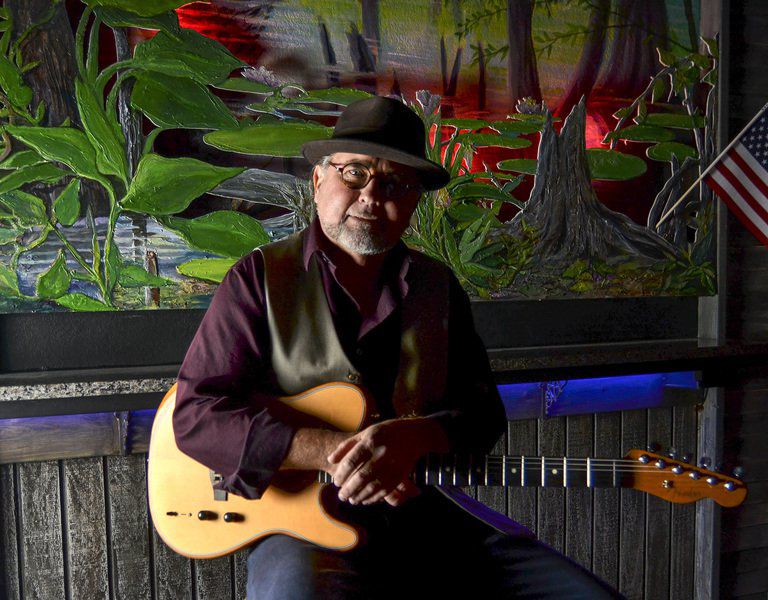 Making people feel good: Musician Dicky James sits at J. Gumbo’s restaurant in downtown Terre Haute. By day he works for a fencing company, but by night he plays the blues. 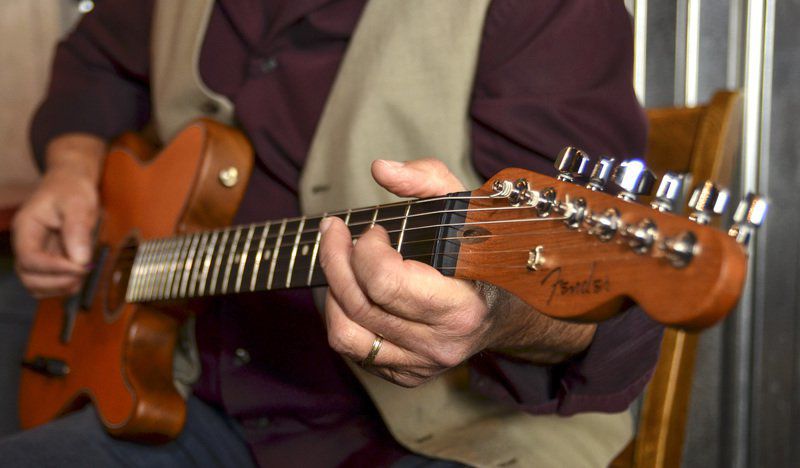 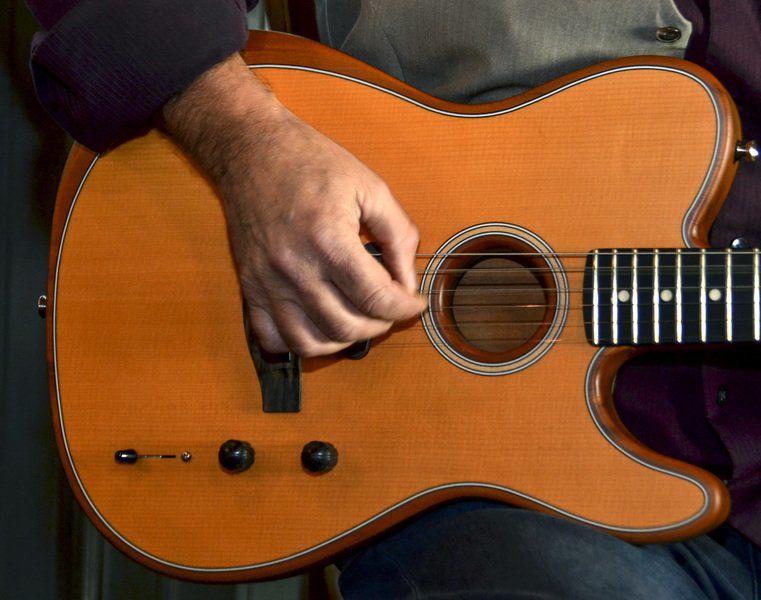 Tribune-Star/Austen LeakeFeelings into songs: Blues musician Dicky James does what his father taught him to do — ‘Tell the story” — through his music with his Fender guitar. 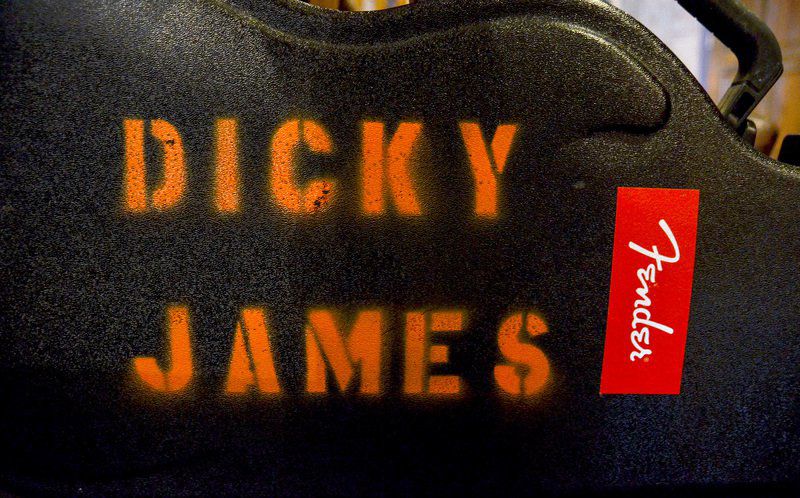 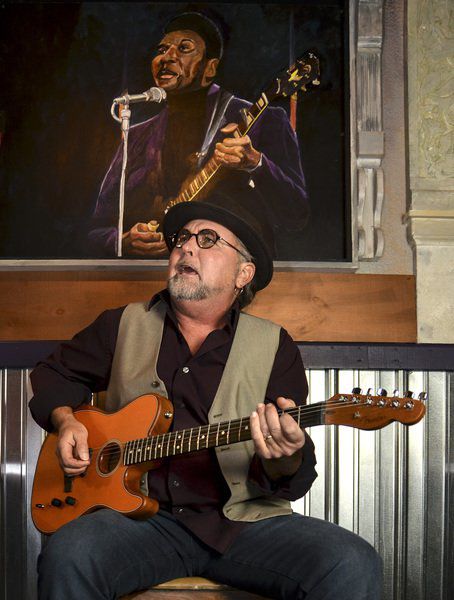 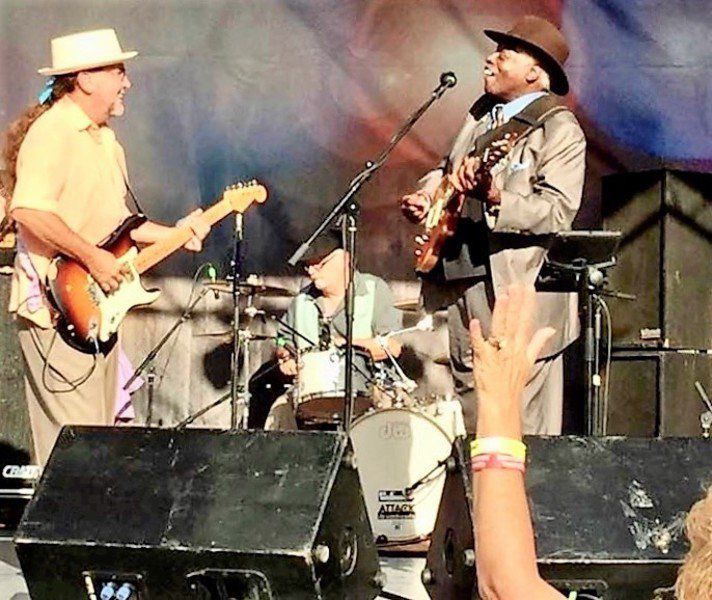 Making people feel good: Musician Dicky James sits at J. Gumbo’s restaurant in downtown Terre Haute. By day he works for a fencing company, but by night he plays the blues.

Tribune-Star/Austen LeakeFeelings into songs: Blues musician Dicky James does what his father taught him to do — ‘Tell the story” — through his music with his Fender guitar.

The 1960s, blues driven version of Fleetwood Mac, that is. In those days, James — born Richard Allen Wagster — was beginning a lifelong passion for the guitar and blues music, while growing up on the Indiana side of the Chicago metropolitan area, better known as “The Region.” Soon, his guitar skills exceeded those of family members who taught him to play. By his teenage years, Dicky James — a casual nickname bestowed by his dad — was performing in bands in and around the Windy City.

James’ journey had begun through a musical life, beginning with his youth in Gary and Hammond, followed by Chicago Heights, Los Angeles, Houston, Michigan, Illinois and Indiana, at least. “There’s probably some places I forgot,” James said, chuckling.

Now, he’s preparing for a homecoming of sorts — his first gig in The Region in 40 years. The popular Wabash Valley singer-songwriter-guitarist and his trio will perform at 9:30 p.m. (Central) Tuesday, Jan. 21 at Buddy Guy’s Legends on Chicago’s Wabash Avenue. Indeed, Guy is a blues legend who’s “been a hero of mine since I was a kid,” James said.

He often plays songs from Guy’s repertoire, like “Messin’ With the Kid.” The chance to play on a stage bearing the name of a pioneer of Chicago-style blues energizes James.

“I’m not nervous. I’m excited,” he said, while sipping a Coca-Cola inside J. Gumbo’s restaurant in downtown Terre Haute, located on, yes, a different Wabash Avenue.

Ebullience onstage anchors James’ performance style. Whether he’s playing to dozens of loyal fans in Terre Haute venues such as Twiggy’s One Headlight Pub or several hundred inside Indianapolis’ iconic Slippery Noodle Inn, James relentlessly works to engage every person in the crowd. He may spot an audience member scrolling through a smartphone, walk off stage and up to their table while still jamming on his guitar, and sit down beside the preoccupied person until they look up from their screen.

They typically smile in surprise, and James smiles back, plucking his notes all the while.

“He’s definitely a major showman,” said his drummer for the past four years, Larry “Washboard Shorty” Long. “He’s not only a great guitarist, he interacts with the crowd.”

During the Blues at the Crossroads festival in downtown Terre Haute last September, James joined Blind Mississippi Morris’ traditional blues band onstage. A woman in the crowd kept hollering, “Play some rock and roll.” Instead of ignoring or arguing with her, James gently asked, “What blues songs do you like?” She started listening.

“He won her over,” said Curt Hall, the festival’s longtime sound engineer, a close friend of James, and the producer of two of Dicky’s albums with his former band, The Blue Flames.

Ironically, James developed his knack for musically bonding with people during his seven-year stint as the praise and worship leader at a Pentecostal church. Another church leader gave him some valuable advice. “He said, ‘Dick, you’ve got to make a connection. You’re drawing people in, but you’ve got to take ‘em with you,’” James recalled.

Ever since, that’s been James’ goal, every time he straps on a guitar.

“When I’m playing, I can’t just be good musically. I’ve got to make people feel good,” James said. “I’ve got to — even just for an hour or two — give people a break from all the crap they’ve been dealing with all day, all year, all their life. And I love what I do.”

Ideally, people in the crowd get up and dance. “That’s when they really shake that stuff off,” he said.

His set list includes blues standards as well as his own original songs, a mix that has filled up five albums, so far. James’ own compositions follow some musical advice from his dad — also a guitar player — shared decades ago. His “Chicago Skyway” is a prime example. It captures a tragedy James absorbed as a teenager.

On the last snow of 1973, James’ dad and three friends were driving on the Chicago Skyway road. Another car slid out of control and crashed into his dad’s car, taking the lives of all four men inside. The song’s lyrics recount Dicky’s mom saying, “Son, I got some really bad news.”

It was James’ dad who told him to write songs that way. Thirty years later, James finally felt able to put that heartache into music through “Chicago Skyway.” “All I did was just what my dad told me to do,” he said. “Tell the story.”

Long sees the impact of James’ bluesy stories from behind his drum set, backing up the guitarist at the trio’s gigs alongside bassist John Orie Stith.

“Most people focus on the music, because it’s so good,” Long said. “But if you really start listening to the lyrics, you find out the story about [Dicky], what’s happened in his life.”

That storyteller technique also shows up on “Waiting,” a rare roots-country ballad about James meeting his wife, Karen. It also emerges on “Truman Street Blues,” a raucous revisit of the Gary neighborhood in which he grew up. Truman Street was a place where “we would jive and sing all night long,” he growls on the song. But, alas, there’s “nobody singing anymore, nobody wants to hear my song, but I’m gonna play it anyway,” James adds, defiantly.

“Waiting” explains the couple’s path, as old friends who reconnected, landed in Terre Haute for jobs and wed. “It didn’t really matter how far we run, it was always meant for us to be right here,” James sings on that track from his 2016 album, “Glory Bell.”

He and Karen have lived for the past 28 years in the same Marshall, Ill., schoolhouse Dicky remodeled into a home. Once an iron worker and a refinery employee in Lawrenceville, Ill., James has long worked for Quality Fence in Terre Haute. He has two daughters, four grandchildren and two great-grandchildren.

The 63-year-old deals with liver problems. Doctors figure the issue stems from a past ailment caused by either his 1970s-era tattoos or a blood transfusion following a harrowing car accident in which a teenage James fell asleep at the wheel. He could be a liver transplant candidate in the future.

Looking strong and dapper in a brown pork pie hat, dress shirt, vest and jeans, James jovially cranked out a couple songs inside J. Gumbo’s as a newspaper photographer snapped photos. He’s looking forward to the gig at Buddy Guy’s and scores of others on his trio’s schedule from now through January 2021. Each represents a chance to connect with listeners.

“I love people,” James said, “all kinds of people.”

For more information on upcoming performances and CDs by Dicky James, go online to dickyjames.com.